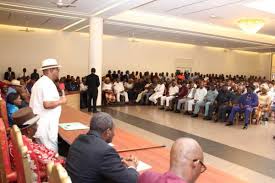 The people of Ogoni ethnic nationality have concluded plans to organise a grand reception in honour of Rivers State Governor, Chief Nyesom Wike, over his positive impacts on Ogoni development through the execution of people-oriented and quality projects in the area.
President of the foremost socio-cultural organisation in Ogoni, KAGOTE, Rt. Hon. Emmanuel Deeyah, disclosed this during a sensitisation meeting with Ogoni stakeholders at Saakpenwa, headquarters of Tai LGA in the state.
Addressing stakeholders from Khana, Gokana, Tai and Eleme LGAs, who attended the meeting, Deeyah said the reception for the Rivers State governor would hold on May 15, 2021 at State School 11, Bori, headquarters of the Ogoni people.
Deeyah said the reception for the governor was not at the instance of KAGOTE alone but the collective resolve of all Ogoni stakeholders, irrespective of partisan concern, to appreciate the governor for his developmental projects in the area, particularly the conclusion of the first phase and awarding of contract for the second phase of the Saakpenwa-Bori-Kono Road.
The KAGOTE president hinted that 10,000 Ogonis would be mobilised from the four LGAs to honour the governor.
Also speaking, the Chairman of Mobilization Committee, Hon Fred Kpakol, said the reception was to thank the governor for his commitment towards the development of Ogoni through the execution of quality and people-oriented projects in the area.
Kpakol, who is also the commissioner for Agriculture in the state, urged all Ogoni stakeholders; traditional rulers, religious leaders, youth, women and political leaders to turnout en-mass to honour the governor.
In his remarks, Traditional Ruler in Ogoni, Meene Suanu T.Y. Baridam, said that Wike would be conferred with a chieftaincy title by the Supreme Council of Ogoni Traditional Rulers as a mark of gratitude for his developmental strides in Rivers State, and Ogoni in particular.
Meanwhile, stakeholders at the first Pan-Ogoni Petroleum Summit, organised by the Pan-Ogoni International Magazine, have urged the Federal Government to declare a state of emergency on the development of Ogoni as, “an expedient and responsive measure towards addressing the infrastructural and human development deficits in the area despite the enormous contributions of the people to the nation’s economic fortune”.
The stakeholders reasoned that, “lOCs were yet to respond to the demands of the Ogoni people in terms of economic, political and environmental rights, which are the fundamentals of the Ogoni struggle”.
The stakeholders also cautioned against, “unbridled incursions of violence in the Ogoni, which has desecrated communities”, and called on government and relevant stakeholders to address the insecurity in the area.
The participants at the summit also urged Ogonis to be resolute, united and vigilant against infiltrative forces that benefit from the insecurity in the area.
The stakeholders’ resolutions, among several others, were contained in a statement made available to newsmen after the summit.
Earlier, the Chairman of the Board of Pan-Ogoni International Magazine, Engr Olu Andah Wai-Ogosu, had in his welcome address declared that the summit was a platform to rouse the sensibilities of Ogoni people, and by extension, the Niger Delta to the dynamics of the oil politics in terms of enhancement of indigenous participation through the issuance of operational licenses to the people to become key players in the oil and gas sector, especially now that there is global paradigm shift from oil and gas to renewable energy.
The chairman called for the review of the entire oil and gas sector to “reflect the prospective realities of the Local Content Act, which endorses the active mobilisation of indigenous content and royalties as fundamental principles in the oil economy.
Speaking, the Chairman of the summit, Senator Bennett Birabi, declared the summit as “apt and pivotal for alerting the Ogoni people to redefine their development objectives and key into the dynamics and vigilance of the global energy shift”.
Birabi said the politics of petroleum in Ogoni had brought “agony, bitterness, strife, anger and aggression, spanning through decades of unpacified struggles and Ogonis have suffered severe brunt”.
The former Senate minority leader commended the organisers of the summit, and stated that, “the conversation is very necessary to affect the course of history positively by changing the ugly narrative that makes Ogoni the hub of the oil and gas sector and the metaphor of brutish human struggles”.