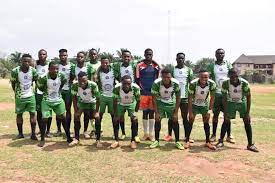 The Chairman, Tropical Gate Foundation Apostle Mbaigbo, says sports, especially football is a veritable tool to tackle unemployment and youth restiveness in the country.
Mbaigbo said this at the finals of Aguata Community Shield football competition held at Central School Field, Amesi in Aguata Local Government Area (LGA) on Tuesday.
He said that youths from 14 communities which participated in the competition had shown great skills and strength, assuring that the Foundation would ensure that the exceptional players were mentored to stardom.
The chairman said that the competition was organised to keep youths positively engaged to take them off the streets so they don’t indulge in criminal activities.
“The Foundation deemed it necessary to engage the youth with sports because of the increasing insecurity that has bedevilled our society and it is in line with United Nations Sustainable Goals which harps on poverty eradication,” he said.
In the final games, Isuofia community emerged winner of the maiden edition after defeating Igbo-Ukwu community by 2-1 to cart home the trophy and ultimate prize of N500,000 while Umuchu community came third after a penalty shootout with Ezinifite community.
Whyte Nwankwo, Chairman of the Local Organising Committee said the communities in Aguata LGA including Amesi, Ekwulobia, Akpo, Achina, Ikenga, Aguluezechukwu, Mgkpologwu, Umuona, Uga, Oraeri all participated in the event.
According to Nwankwo, the tournament is expected to promote unity, peace and mutual coexistence among communities in the area.
He said the teams were divided into four groups A and B having four teams each, while group C and D had three teams each.
According to him, Fair Play team award went to Ikenga, while Ewezuga Ilomba from Isuofia won the overall best player award.
“Highest goal scorer was Ezeokoye Onyeka from Ekwulobia, Emeka Okonkwo from Isuofia won the best goalkeeper rating, while Chekwube Okonkwo also from Isuofia was the best coach.