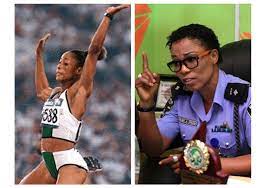 ACP, Chioma Ajunwa-Opara, says Nigeria ought to have produced more talented world-beaters in her stead 25 years after winning a gold medal in Atlanta.
The Atlanta ’96 Olympic Games gold medalist made the remark on Tuesday during a press briefing held at the Radisson Blu Hotel Ikeja.
The police officer stressed that it had become necessary to discover new talents.
Ajunwa held the conference in commemoration of her Golden Jubilee anniversary for winning the individual gold medal in the long jump event at the Summer Olympics.
“It is on record that I am the only person on earth that has played football to the World Cup level and also won Olympic gold in athletics.
“In line with the above, to celebrate the golden jump of 1996 Olympics Games, some activities have been lined up.
“We will have the Olympic Talent Hunt for girls in eight states of the federation, also the launching of six billion Naira Ultra-Modern Sports Development Centre in Owerri, Imo,” she said.
The Olympian said her greatest desire was to see young girls discover themselves and achieve greater heights.
“It is my fervent hope and wish that Nigeria as a country, produces more Chioma Ajunwas, Mary Onyealis, Falilat Ogunkoyas, the Ezinwa brothers, and this can be done by initiating a deliberate and sustainable programme.
“ We wish to use this medium to invite prospective partners, government, the private sector, philanthropists and well-meaning Nigerians around the world and of course the media.
“On behalf of the Chioma Ajunwa Foundation, and Akaji Ikukuoma Foundation, I’d like to thank God and the Federal Government of Nigeria for allowing me to serve,” she said.
Also speaking, Henry Amike, the Director General of the Chioma Ajunwa Foundation, said that tour to eight states to discover and groom talent would flag off from Lagos State.
Other states are Abia, Anambra, Enugu, Ebonyi, Imo and the Federal Capital Territory, Abuja.
Talents from age 10 to 17 years would be the primary focus of the foundation.
Olympic Anniversary Press Conference held at Raddisson Blu Hotel Ikeja
It wuld be recalled that Ajunwa became the first athlete in Nigeria and the first black African woman to win an Olympic gold medal in a field event.