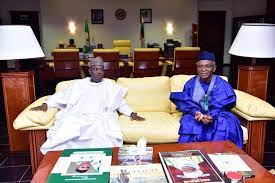 The Kaduna State Governor, Malam Nasir el-Rufai; and Sokoto State Governor, Hon Aminu Tambuwal; have stressed the need for states to cooperate in tackling the menace of banditry and kidnapping.

The two governors took the stand in Sokoto when el-Rufai visited to condole with Tambuwal over the death of Hajiya Aishatu, the daughter of late Premier of Northern Nigeria, Sir Ahmadu Bello.

This is contained in a statement signed by Tambuwal’s Special Adviser on Media and Publicity, Malam Muhammad Bello, and released to newsmen, yesterday, in Sokoto.

El-Rufai commended Tambuwal’s unflinching commitment to the pursuit of peace and security in all states, especially in the North-West.

He affirmed that governors of the seven states in the North-West have been working closely with President Muhammadu Buhari to bring an end to banditry and kidnapping in the zone.

According to el-Rufai, Tambuwal’s role in tackling the menace of banditry in the area has been complete, fraternal and unbiased.

“I want to express my appreciation to Governor Tambuwal for cooperating with us in a totally, brotherly and non-partisan manner to bring the whole of the North-West together. May Allah reward you with His blessings,” he said.

El-Rufai, however, expressed concern over the rising cases of kidnapping and banditry in the zone and its effect on the public.

“There is concern on the sufferings that people face, as they have been going through difficulties because of these attacks occasioned by bandits.

“From Sokoto, Zamfara, Katsina, Kaduna and parts of Kebbi and Niger states, our people have been going through trials and tribulations arising from the activities of bandits.

“As governors, we have been meeting, putting our heads together to do the best we can. The last meeting we had was, last Thursday, with the president.

”We expressed our concerns and came up with a critical road map to end this banditry in our region once and for all,” el-Rufai said.

On his part, Tambuwal noted that the security challenges in the zone have become worrisome and “a great source of concern to all of us.”

Tambuwal said the latest was the gruesome murder of a Divisional Police Officer and eight policemen in Kebbi, last Monday, and the recent attack in Dange Local Government of Sokoto State, where lives were lost.

“We must all put our hands on deck to ensure that we nip this thing in the bud.

“As you rightly said, we have been working together and collaborating. There’s no issue of party.

“Our security and development have nothing to do with party. It is all about the people that we represent.

“I have always said there should not be politics in developing and dealing with security issues.