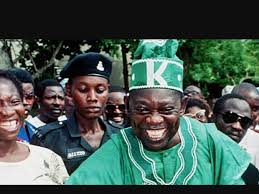 It will be precisely 28 years tomorrow when a historic presidential election was held and its outcome criminally overturned by a savage government. Former Military President Ibrahim Babangida’s decision to annul the poll particularly had sinister, dehumanising and macabre political motives. However, the emerging national battle for liberty produced an incredibly defective Constitution, which returned the country to civil rule on May 29, 1999.
What eventually resulted in the recognition of June 12 by the President, Muhammadu Buhari, as the annual Democracy Day was the commitment of Nigerians to the ideals of that day. The day is also to commemorate the 1993 general election when the Nigerian people, across ethnic, religious and demographic fault lines, invested their hopes in freedom in Moshood Abiola, the winner of the poll and the supreme sacrifice he paid in his quest to reclaim his victory.
But almost three decades after, rather than broad revelries, misery still dissipates throughout the land as Nigerians face the painful reality that the democratic pledge of liberty and the pursuit of prosperity have been soured terribly by visionless leadership, a warped Constitution and a complacent citizenry. Instead of the solemn declaration of democracy, the people paid dearly for the lethal combination that has merely delivered a civil rule with all its attendant declines.
Today, Nigeria is an empirical exhibit of a failed state. Nigerians are now realising the hard way that entrenching democracy goes beyond outward adornment of periodic elections, the presence of legislature and other extremely chaotic symbols of government. Democracy has become a mere covering for a few to seize power and public treasury when the institutions fails to achieve the real democratic goals of personal, political and economic liberty and the pursuit of the greatest good for the greatest number.
More than two decades of the civil rule charade, it is numbingly sad that a majority of Nigerians do not discern their lives to be better. Corruption still defines governance, as well as poverty, inequality, economic loss, inefficiency, public and private sector dysfunction, poor infrastructure, failed economic and political systems, impunity, injustice, organised crime, terrorism and diminished state capacity.
Corruption has become the new normal as public frustration and cynicism pervade the land. The fundamental elements of democracy — rule of law, social justice, citizens’ participation, responsible political parties, active free press, independent parliament and judiciary, in nominal existence, are similarly under the onslaught. Secessionist agitations are getting robust. If democracy truly thrives in the country, why do we have all these crises?
Our progress can only be measured by how far the country has gone in attaining these key elements of democracy. Sadly, for the past 28 years, it has been difficult to deepen these basic values because the executive arm is incompetent, the legislature pathetically weak and the judiciary dangerously yielded. The three, of course, share a common DNA — corruption. Despots have been parading themselves as democrats and their common enemy is free speech.
The visionless Buhari regime is also trying to intimidate the media into docility. The regime is planning to criminalise “hate speech,” under a law that may require mass surveillance and close monitoring of social media. Yet, it is acknowledged in free societies that what counts as offensive is subjective, so “hate speech” laws can be elastic tools for criminalising dissent.
One of the good things about the commemoration of Democracy Day in the country is that it should ideally cause a deep, national reflection on where we are coming from, the journey so far, and a re-energised commitment to stay the course.
Democracy Day is not just another public holiday or an opportunity for ceremonies with vacuous speeches. It is a serious business. It is the best test we can give ourselves to determine how deeply rooted we are or how far we have strayed from upholding the fundamental doctrines of respect for the rule of law, free press, and respect for human rights.
The day should also be a gauge to measure the level of maturity of our political process in the conduct of free, fair and credible elections, and the quality of our civic engagements. How do we know if we have made progress? By asking questions. And if by doing so, it is clear that we have not, the question, then is: what are we celebrating?
This year’s Democracy Day is another opportunity to reaffirm an unbending commitment to governance that holds the rule of law in the highest esteem and prioritises the right of every citizen. It must also be a time to hold conversations on the kind of leadership that can unite the diverse peoples of Nigeria in the days ahead.
We cannot over-emphasise the power of visionary leadership in fostering strong democratic doctrines in Nigeria. That is the only way progress can be made on our democratic journey and we can once again be a shining example to the rest of the world. If that is not the purpose of the day, then what exactly are we celebrating?

The Nigerian governance structure is predicated on the principle of federalism. The implication is that there are other levels of governance in Nigeria that make up the federation. Government at the Centre exercises exclusive list in certain areas of governance and enjoys concurrency with state Government in others. In principle there should be a residual list of governance items, but this does not exist in actual practice as the local government administration is yet to enjoy full autonomy.
The various state Governments exercise concurrent list of governance items with the federal government in such areas as Education, Road infrastructure, Health, Environment and others.In the area of security, the constitutional provision which states that the business of Government is the protection of lives and propertyof citizens applies to all the levels of Government.However, the convoluted nature of governance structure where the federal government is in control of too many governance items has made the management of security architecture by the states very difficult, but not impossible. Governors who are described as the chief security officers of their states, cannot not have full control of the Armed forces and police. For example the commissioners of police take instructions from the Centre, precisely from the Inspector General of Police.
The states and local Government areas are the closest government to the people. This gives the states gargantuan responsibilities and challenges. The states owe their citizens more responsibilities than the federal Government but have limited resources and powers to accomplish them despite their potentials in natural resources and revenue generation. Unfortunately, the states are held down by the absence of Fiscal Federalism in the Nigerian Federation.
These challenges and more have affected and afflicted development in the states in the areas of infrastructural development, poverty alleviation, environmental control, security and human capital development.Some commentators are of the opinion that the impoverishment of the states by the federal government is partly responsible for the spread of insecurity, growing agitations and secessionists tendencies in Nigeria.
Peer Review Mechanism can be a major tool which the states can use to alleviate their burden. It is in consonance with the local aphorism that problems shared are problems solved. Peer review mechanism can be referred to as self-assessment for good governance by peers in similar enterprise.
For example, peer review mechanism is an instrument of Governance among African States tagged the African Peer Review Mechanism (APRM) .It is a mutually agreed instrument which member states of African union acceded to as a”self-monitoring mechanism”. This self-assessment is to encourage conformity with regards to political, economic and corporate governance values among member states. It is important to observe that the African union Agenda 2063 and sustainable Development Goals 2030 have been monitored and evaluated by AU members through Peer Review Mechanism instruments.
Simply put peer review is the evaluation of values by one or more people with similar competencies. Governors of states who are saddled with governance challenges can go into self-assessment of their governance capacity by looking at what other governors have done in their states, evaluate and copy for the development of their own states.It could also be a source of motivation for good governance.
Peer Review Mechanism is not a copy and paste mechanism, it should be a positive way of avoiding the pitfalls of a particular governance style while evaluating and copying what is good.Peer Review Mechanism as an instrument of governance in Nigeria has very fertile pedestal. Different regions in Nigeria have platforms where their Governors gather to foster social, political and economic integration. These groupings are envisioned to rub minds on development issues in their various states. In the south-south there is the BRACED.There are others including the South East Governors forum, South West Governors forum and the various Governors fora of political parties as well as the southern Governors forum recently convoked.Governors in these groupings can pick up models of development from their colleagues after thorough evolution of such projects on how they can impact meaningfully and add values to their constituents. For example, the south East Governors can copy models of development from Ebonyi State where the Governor has defined Governance through infrastructural development and little bits of what other Governors are doing.
Governor NyesonWike stands tall in the south-south. There are so much the Governors of south-south and indeed Nigerian Governors can learn, from him, especially his prowess in prudent management of Resources, Revenue Generation and infrastructural development, particularly in the area of Road infrastructure, tertiary education and Health. The sign posts in these areas of development are models that can be copied by sister states.
Also, Lagos state as the center of excellence and industrial development has a lot of exemplary blue prints and projects execution that other states in the west and even the country at large can copy. It only requires a proper study and evaluation.So many states in Nigeria picked the traffic control model of Lagos state in their LASMA scheme. This is a good example of peer review in the right direction. Recently the Nigerian Guild of Editors went to kano for their Bienal convention and one of the highlights of their trip was the inspection of projects embarked upon by the kano state Government in the last six years.
What stood out in all the projects executed by Governor Ganduje is the security infrastructure. The entire state capital is covered with CCTV Cameras that monitor every movement in and around the metropolis. This model in security architecture can be copied by the states in the North especially in the North East to stem the tide of insurgency and banditry in the region. This is what Peer Review Mechanism entails.
Let the Governors exchange ideas and rub minds to move their state forward in the realm of development.