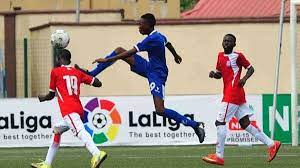 Director of Nigeria Nationwide League One (NLO), Ebere Amaraizu, has applauded the ongoing Nigeria Professional Football League (NPFL)/Spanish La Liga U-15 Football Tournament in Enugu.
Amaraizu told newsmen at the weekend in Enugu that “the tournament is a well-thought out catch-them-young and developmental programme for Nigeria football’’.
Tidesports source reports that the tournament, which commenced on April 15, is being held at the main-bowl of the Nnamdi Azikiwe Stadium, Enugu.
The tournament being sponsored by the NPFL and Spanish La Liga has the Enugu State Government and the League Management Company (LMC) as co-hosts.
Amaraizu, who is in-charge of NLO activities in South-East, said that the tournament was a veritable self discovery platform.
According to him, the tournament will give strategic leadership direction to budding football talents in the country.
“Nigeria NPFL/Spanish La liga in conjunction with the Enugu State Government through this tournament has given a platform for self discovery to our young minds using soccer as a driving tool.
“I commend the organisers as well as Enugu State Government for giving tremendous support to the ongoing tournament,’’ he said.
Amaraizu, who is also the National Coordinator of Police Campaign Against Cultism and Other Vices (POCACOV), said that the tournament was in tandem with the objective of the campaign in using gainful platforms to engage the youths.
He, however, thanked the POCACOV and La Liga Ambassador, Mutiu Adepoju, popularly known as the headmaster, for maintaining the standard of the tournament and bringing it down to Enugu.
The tournament, which attracted notable feeder (junior) teams of NPFL and Nigeria National League (NNL) club-sides, will end on May 2.