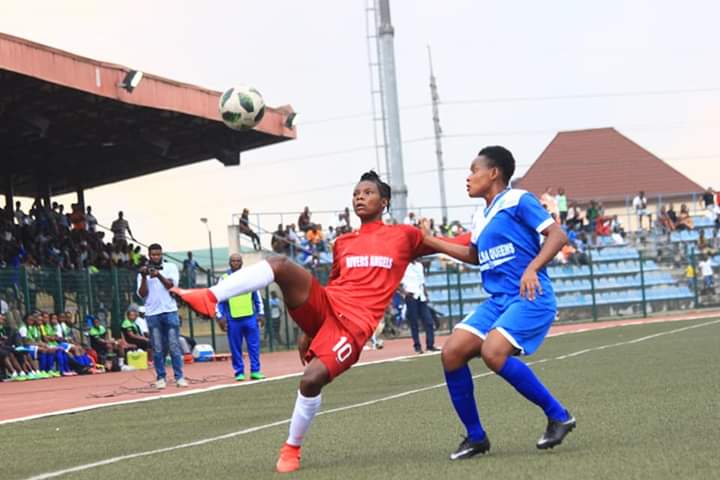 Rivers Angels FC ended the last match of the first stanza,  2020/2021 Nigeria Women Football League NWFL Premiership in a grand style, as they defeated arch rivals Bayelsa Queens 1-0 in one of the week 13 fixtures decided Wednesday at the UNIPORT  Football Pitch.
The match, which was rather a ding dong affair saw the host record the only goal in the match at the dying minute, as all scoring chances and attempts to register a goal  in the first half and early minutes into the second half proved abortive for both sides.
The match, which was the last match of the first round,  had earlier been decided as the wrap up game for the league by the NWFL Board and managements of all 14 premiership clubs,
in order to enable the country present a representative at the forthcoming much anticipated CAF Women Champions League in May, this year.
Head Coach of Rivers Angels Team, Edwin Okon, commended his team for the victory against visiting Bayelsa Queens, saying that they prepared well for the encounter, knowing too well that their opponents were a strong side and rivals .
Okon  said  that the victory was well deserved, because his team prepared  adequately for the battle, was determined as well and they got the desired result, adding that, the result was not an easy one though, but it came, eventually.
“ What can l say? It’s a 1-0 win. We  got what we wanted, but we worked hard for it. Bayelsa Queens FC is a good and strong side, l must confess. It happened that we carried the day. Our hard work and determination paid off. We now look forward to  the forthcoming super six competition expected to kick off April 19, 2021.,”  Okon explained
With the win, Rivers Angels  remain third on the league chat with 28 points, while, Bayelsa Queens and Delta Queens are first and second, respectively with 31 and 29 points from 13 matches played so far.