In a bid to restore the marriage of a certain couple in Port Harcourt, ( names withheld) the family members and parents of the wife has forced the husband to an undertaken that he will no longer used their daughter as a punch bag. The Port Harcourt Metro gathered the parents of the wife are relatively well to do very supportive to the upkeep of their daughters family. Their intervention came as a result of repeated cases of physical and psychological abuses of their daughter by her husband. It was also gathered that the parents of the wife had made moves to terminate the relationship to secure the life of their daughter but she bluffed their moves and stuck to the marriage based on her professed love for the husband. The husband was said to have been invited to an intense family session during which he was asked to sign an undertaken to be of good conduct and act as a responsible man or gets his wife forfeited. The session became dramatic when the repentant husband and in-law was said to have broken down in tears , with confessions that he was always propelled by some incontrollable forces to act the way he did.

Nothing could be more elusive and desirous as the special skills and talent of a wand and a midas touch. Dr Freeman O’ Freeman is one the few possessive of this rare gift. He has a penchant for the reorganization of ailing industries, organizations and institutions. The foremost technocrat and consultant was recently spotted by the Port Harcourt Metro at a public function in the Garden city. When his attention was sought for an interview he willingly obliged an the session was a deep insight into his experience especially his years of consultancy services with the Rivers state Government in the  early 1990s. During these period he recalled that 14 parastalals and government agencies including the three state owned media Houses were under his consultancy services for full reorganisation process. “We made the State Electricity Board to be the highest revenue earner after the Ministry of finance, we also made the staffs of Water Board, Super Board, and Rivers Marine to earn their salary after the reorganization processes, some of the moribond companies can still be revived.”  He said Rivers state was deeply blessed with potentials to host the business world through flourishing business activities, nothing that most black Americans business moguls were looking for opportunities of investing their wealth and knowledge. Dr Freeman who is also and author and religious counsellor emphasized the need for proper restructuring of the Nigerian state to address the needs and imperatives of justice in the country. He canvassed for the creation of a state owned insurance company to secure the wealth and investments of  Rivers state. “ Rivers state is global investment hub, their is need to decongest Lagos by tapping into the enormous investment potentials in Rivers state, it’s quite unfortunate that investments of Rivers state government are easing out without full privileges to the state government, despite hosting two federal terminals economic activities in the state is still low. I want the Rivers state government to reap the benefit of insurance before Governor Wike leaves office, it will count for him as one his greatest legacies for Rivers people. Commenting on the prevalence of ethno religious crisis in the country, he pointed out the very custodians of religious faith were the propellers of the evolving Crisis. “it’s very unfortunate that people don’t practice what they preach, the much resources in the hands of the ministers should be redirected for the interest of the followers, the early missionaries gave education virtually free. Ministers should allow their members to have leveraging access to their schools, this will reduced the loads of poor parents and help in producing an informed and better society”. With a deep sense of concern, he urged the federal government to address the growing spate of insecurity in country, particularly the “ incautious activities of herders.

As part of measures of promoting effective medical care at the grassroots, a body under the auspices of Medical  Xray and Imaging Technicians Association of Nigeria says plans has been put in place for mass sensitisation on the need for greater access to medical services at the rural areas. National President of the body, Rev Akiene Nunyor who disclosed this during a chat with newsmen in Port Harcourt, yesterday, said the sensitisation was targeted at rousing the sensitivities of critical stakeholders towards improving health care at the rural areas as well as creating awareness among the rural dwellers. He pointed out that the absence of ultra sound facilities at rural communities was responsible for high mortality among pregnant women in rural communities, as they lacked access to the facilities. Its difficult for women to go for scan exercises for proper medical check at the rural areas. In times of emergencies before they get to the urban areas that have the facilities it becomes late. He called for a synergy between the private sector and government especially in the area of research, training and manpower development in the health sector,  He assured that the body was ready to provide the professional regulatory services for middle manpower development and standards in medical practice. While commending the Rivers state Government for its efforts in promoting care in the state he called for a “ Public/ Private sector  driven “approach in promoting effective health sector delivery. 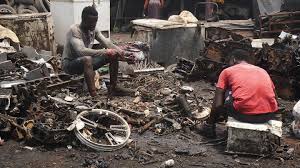 They are every where in the city, plying their trade in a measure that is almost indispensable, yet a nuisance. The residents depend on them for the disposal of their wastes but they also loathe the excesses of their prowling activities which the residents consider to be unnerving.
They are scavengers, scrap merchants and sanitation vendors, spectacular in the nooks and crannies of Port Harcourt and its environs where they scoop on refuse dumps, digging out their gold mine in a an insipid taste that defies the rules of decency.
They hang out in clusters, lining out their trucks as cherished possessions and tools of economic activities. They move around the neighborhood with their trucks filling them with both domestic and industrial wastes that are later filtered for their economic benefits.  the scrap collectors gather up their products from various parts of the city and store them at a depot where the scrap products are scaled and loaded in trailers for delivery at designated places. The scrap laden trailers are mostly escorted by heavily armed security   details. The scrap dealers smile to bank on the delivery of a week-long process of accumulation and assemblage of their products. The men espouse a strange sense of bond and fellowship. Their dump site also serves as their collective abode. Their manager, a middle aged man plays the role of a middle man between the scrap merchants and their patrons. After a successful delivery he withdraws money from the bank and pays them their individual charges.
The scrap dealers also have a notorious detail linked with their alleged criminal activities of carting away valuables of residents such as generator sets, stoves, electric irons, and other metallic products they come across. The residents abhor the excesses of their prowling activities but live by share adjustment to the situation as they depend on the scavengers for waste disposal. Some residents of Port Harcourt, who narrated their experiences to the Port Harcourt Metro, explained how they lost their belongings to the scavengers. Mrs Candy Ibifa, said, her electric stove and metal pots have been taken away on more than two occasions by the scavengers. “ One bad thing about these people that move around with trucks is that they take away peoples belongings without permission. They have collected my electric stove and pots twice “.Another resident, Mr Gibson Kooh, said the prowling truck minders took away his generator set while roving around in search of scraps. “Most of these truck pushers are thieves, they took away my generator before I returned home from my shop. My neighbour also lost his generator to them, some times ago, this is very bad The residents called for more vigilance and security attention within the neighbourhood to check the activities of the truck pushers.