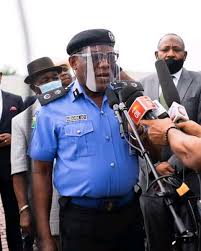 The Commissioner of Police, Akwa Ibom State, CP Andrew Amiengheme, has expressed displeasure over the incessant attack on security officers in the state which led to the killing of one CSP Ben Ajide, Commander of the State Quick Intervention Unit and two others,
Four other police officers are still missing in Essien Udim Local Government Area of Akwa Ibom State.
In a press release signed by the Command’s Public Relations Officer, SP Odiko Macdon on Wednesday in Uyo, the State capital, the CP who said the remote and immediate cause of the incident were yet to be ascertained, stressed that such a trend was unacceptable and would not be tolerated in the state.
The Tide source gathered that security operatives particularly, the police have come under attack from gunmen in Akwa Ibom State in recent times.
Within the month of February police facilities including vans have been set ablaze while an officer on patrol vehicle was also burnt to death and few others shot dead.
It was further gathered that gunmen terrorising the Ikot Afanga community in Essien Udim Local Government Area of the state at the early hours of Monday, precisely at 2:30am stormed the residence of one inspector Aniekan, an indigene of the area who was still fast asleep and set the house ablaze.
A resident of the community who identified herself as Mfon narrated to our newsmen that the said inspector had played a prominent role in arresting the criminals.
According to her, “this thing is no longer funny, we woke up yesterday to see the burnt body of Inspector Aniekan. Those boys saw him as a threat considering his role in arresting, detaining and convicting them. They accused him of sometimes detaining them in the station without charging them to court.
“He was taken unawares and he has just paid the supreme price.”
Meanwhile, the village head of the area, worried over the incident reported the matter to the police and demanded more policemen in his area, but the gunmen came after him and burnt down his house as no one was inside the house when they launched the attack.
However, a Police Quick Intervention team led by CSP Ben Ajide was drafted for peacekeeping to the scene, unfortunately, the CSP was shot dead by the gunmen alongside two other officers while four others are still missing.
Amid that pandemonium, however, the military officers stormed the area to quell the crisis but one of them was shot dead while their van burnt down.
The State Commissioner of Police in reaction condemned the act and promised to bring the perpetrators to book. He, however, condoled with the deceased’s families and urged the public to avail the police with useful information that would aid in the investigations and arrest of the hoodlums.
The statement read in parts, “in recent times, in EssienUdim Local Government Area, Akwa Ibom State, security personnel, particularly, the Nigeria Police, Akwa Ibom Command have come under persistent unprovoked attacks, leading to deaths and destruction of property, a trend which is totally absurd and unacceptable.
“Whereas the remote and immediate causes of these unprovoked attacks are unknown, a discreet investigation is on the way to unravel the same and seek a lasting solution.
“The Commissioner of Police, Amiengheme Andrew is deeply saddened by the unprovoked attack on security personnel who were out maintaining the peace which led to the demise of CSP Ben Ajide who was the Commander of the Command’s Quick Intervention Unit and two others, while four others are missing”.