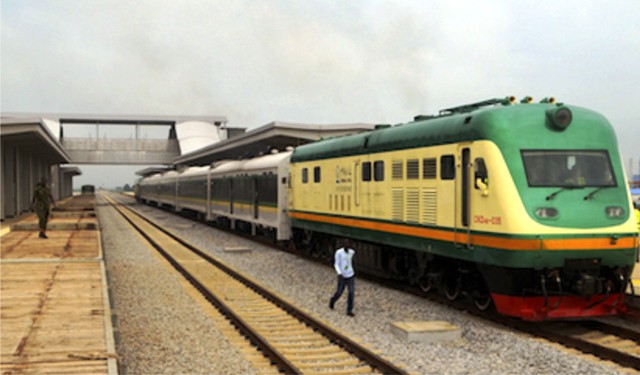 Following the errors made by the Federal Government, by failing to link the rails to the seaports, the Nigerian Shippers Council (NSC), has given a warning that such mistakes should not be repeated, but to rather link the rails to the Inland Dry Ports  (IDPs).
The Executive Secretary, NSC, Barr Hassan Bello, gave this warning during a two-day workshop for validation of draft operational manual for Inland Dry Ports in Nigeria.
He noted that the dry ports must be of international standard, adding that if the dry ports were slow and manually driven, they would not serve the purpose of establishing them.
He said, “The Inland Dry Port projects were conceived as part of Federal Government’s reform programme in the transport sector to decongest the seaports and bring shipping and port services closer to importers and exporters in the hinterland.
“Consequently, the Federal Executive Council granted approval for the establishment of Inland Dry Ports in March 2006 at six locations across the country namely, Isiala-Ngwa in Abia State, Erunmu Ibadan in Oyo State, Heipang, Jos in Plateau”.
Others he said, included, Kano in Kano State, Funtua in Katsina State and Maiduguri in Borno State,
Bello stated that the projects were to be developed on Public Private Partnership, using the Build, Own, Operate and Transfer (BOOT) model”.
The Secretary pointed out that Messers CPCS Transcom Nigeria Ltd., was also engaged by the council to draft an Operational Manual to guide the implementation and operation of the IDPs in line with international best practice.
He added that the operational manual would provide detailed processes, general outlook and those that were involved in the operation of a dry port.
Earlier, Director, Maritime Services, Federal Ministry of Transportation (FM-OT), Mr Dauda Suleiman, said that the project would greatly provide stimulus to the economy of the State and country at large.
“The dry ports are part of the solution to alleviate the problems of hinterland shipper’s inadequate access to the seaports and to remove frequent congestion, which result in the loss of cargo in transit, carnage and accident on our roads.
“It is pertinent to state that, for these projects to succeed there must be support and collaboration with the stakeholders.
“I am happy to observe that the Ministry and Shippers’ Council is already collaborating with Nigerian Railway Corporation, Nigerian Ports Authority, Nigerian Customs Service and other stakeholders to ensure its implementation,” he said.
Suleiman urged the participants to take full advantage of the workshop to address all grey areas in the draft operational manual and to come up with workable policy that would drive the operations of the inland dry ports.
By: Chinedu Wosu
Related Topics:
Up Next

Why Social Media Is Important For Marketing in Business

Nowadays running a business is one of the easiest thingsthat you can do. It can be a small business or a big one it doesn’t matter. Thanksto technology there are so many easy ways to market your business online. This brings us to the topic at hand as to why social,media is important for business marketing.

Directing Traffic towards Your Business

One thing that you should keep in mind while marketing your online casino au business on social media is that customers want something they can trust. By posting your brand on social media you get the feedback you need. The more response that you get from your post is what will get more people to trust your brand.

Connecting with your customers on social media is one of the ways to bring life into your new online casino business. It’s not all about your making use of these platforms to market your business but also getting to understand theneed of your customers.

Gets You Customer Loyalty

What could be better than a free way to establish brand loyalty? Customers interact with and follow the companies they like. What’s more fascinating is that 53% of clients who follow your company on social media are likely to be loyal to it specifically.If clients follow you on social media, they’re more likely to select you over your competitors.

There are so many benefits that can be brought about by the use of social media in your business. It’s the new way of, marketing that will make your brand grow.

Ways to Use Technology in a Small Business

Technology can greatly increase the success of your business. In different cases, the use of technology may be the progression of the processes you have in place already. In this competitive era using technology as a kind of support to boost your business skills and opportunities can be the best way.

Technology has also changed the online casino gambling industry. It has increased convenience formobile users so that gambling is accessible all the time.

In this article, we are going to give you ways to use technology in a small business.

Use Technology in a Business to Connect with People

One of the great ways of using technology is the ability to communicate and connect with other people. Technology has become a crucial part of not only an individual’s life but also the business. It is an amazing tool to get in touch with customers and employees.

When it comes to modern technology, sending emails and newsletters to the customers can lead one to grow his business overtime.

Therefore, there is an important increase in the sphere of collaboration, with a certain level of flexibility. It has become convenient and also teamwork has grown to a level of understanding.

Regardless of the type of business that an individual is starting, there need to be specific marketing techniques. It would help in the company’s expansion. With technology, it has now become more accessible than ever to hone on those tactical skills to have a real money casinos in Newzealand to be successful business.

In addition, there is software that can help one to build a reliable and solid business plan. Building a company website is an excellent goal for creating a business plan.

In conclusion, these are some ways on how to use technology in a small business.

Top Reasons Why a Research is Necessary When Traveling

When traveling, research can significantly affect how the new environment you’re going to will receive you. Researching about a country you’re going to gives you a great understanding of the area. It also gives you information on what to expect and what to avoid. However, researching is also important when you want to play online gambling games as well.

Let’s look at the reasons why researching is important before you travel.

You Discover the Hidden Gems of Your Destination When You Research

If you research properly before traveling, it gives you an insight into the must-visit places. Researching also gives you a chance to be adventurous without the need of relying on a tour guide. Having proper information about a place you want to travel to gives you the chance to explore more.

Moreover, understanding the social norms of your travel destination helps you to easily get used to the environment. You should be in a position to teach yourself a few words used by people in the country you’re in. Doing this can help you to minimize the issues of a language barrier.

Appreciating the culture of a country you’re traveling to is necessary. For instance, knowing the appropriate dress code for a certain occasion is important since some places have rules on this. Believe us, you do not have to dress offensively in a foreign country you’re unfamiliar with.

Know the Places to Avoid

Furthermore, if you research properly before traveling, you’ll know certain places to avoid. For instance, make sure you gather some information on the streets that may be dangerous. This helps to avoid situations of being robbed your hard earned money from online blackjack games .

Researching Helps You to Evade Scammers

In addition, it is important to know how to stay away from places and people leading you to get scammed. So, how do you avoid getting scammed? Researching well can help you with that.

Doing proper research gives you the chance to make informed decisions when the need arises. It is crucial to understand that not everything will flow smoothly in your travel expeditions.