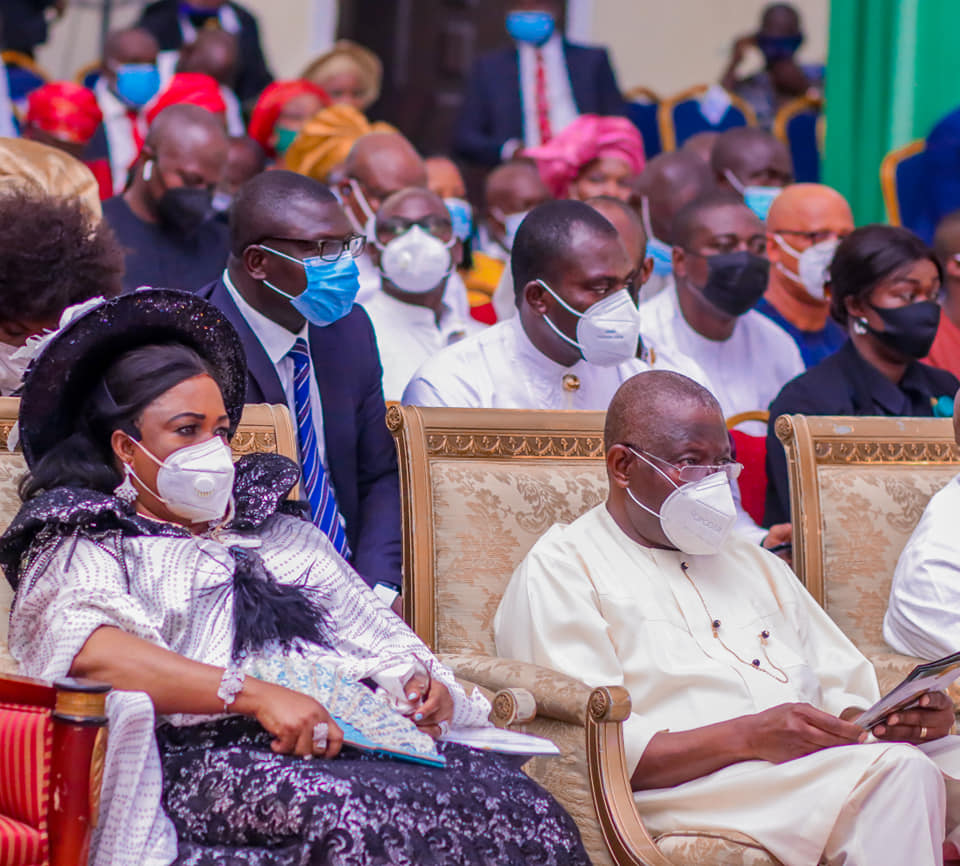 Former President Goodluck Jonathan, his wife, Dame Patience, governors of Bauchi, Akwa Ibom and Oyo were among dignitaries at the special victory thanksgiving of the Bayelsa State Governor, Senator Douye Diri, in Yenagoa on Saturday.
The event which held at the 15,000-seater Ecumenical Centre to commemorate the February 13, 2020 Supreme Court verdict that ushered in Senator Diri as governor of the state as well as the first anniversary of his administration also had in attendance the National Chairman of the Peoples Democratic Party (PDP), Prince Uche Secondus, Senior Special Assistant to the President on Niger Delta, Senator Ita Enang,  National President, Christian Association of Nigeria, Dr. Samson Ayokunle, General Overseer,  The Lord’s Chosen Charismatic Revival Movement, Pastor Lazarus Muoka among other clerics.
Immediate past governor of the state, Senator Seriake Dickson, was represented by a former Secretary to the State Government, Barr. Kemela Okara.
Speaking at the event, Governor Diri expressed appreciation to God for the miracle that brought him to office, saying he would forever remain grateful and committed to the service of the state.
A statement by his Chief Press Secretary, Mr. Daniel Alabrah, quoted him as also thanking the judiciary, particularly the Supreme Court Justices for their courage in delivering such a landmark judgement.
Diri said the Justices proved that the judiciary remained the last hope of the common man.
He equally appreciated all those who stood by him after the election and before the apexc ourt ruling, especially Senator Dickson, Akwa Ibom governor, Udom Emmanuel and his Oyo counterpart, Seyi Makinde.
The state helmsman urged people of the state to always exude love and embrace one another irrespective of party affiliations, stressing that the development of the state was bigger than any group or individual consideration.
“They say the judiciary is the last hope of the common man. For us, the judiciary was our last hope. We thank all those who contributed one way or another toward ensuring our victory”, he said.
“Let me again urge Bayelsans not to see those in APC as enemies. Today they are there but tomorrow they might be in PDP. As I speak, many of our brothers in the APC are returning to the PDP”, he added.
Former President Jonathan, in his goodwill message, urged politicians to see politics as a means of developing the people and not warfare.
The former Nigerian leader stressed that at the end of every political contest, politicians should sheathe their swords and work with the winner.
He commended Diri for his non-discriminatory style of politics, which he said has seen him embrace everybody, regardless of political leanings.
He also called for support from people of the state to enable the Diri administration succeed.
“My message today is that those of us in politics should learn to play politics as politics and not war. At the end of the process, let us come together and support whoever emerges winner’, the ex-president said.
In their goodwill messages, Governors Seyi Makinde, Udom Emmanuel and Senator Bala Mohammed of Bauchi State as well as Prince Secondus all commended Governor Diri for his strides in office and expressed confidence that he would transform the state while calling on Bayelsans to rally round him.
Delivering a sermon on the topic: “It is The Lord’s Doing,” Pastor Lazarus Muoka described Diri’s emergence as divine.

President Muhammadu Buhari, yesterday, in Riyadh, Saudi Arabia, said initiatives to drive the digital economy and fight corruption in the country should give investors “a lot of comforts”.
Among the initiatives mentioned by the president are e-Naira, Treasury Single Account (TSA), Bank Verification Number (BVN), and National Identification Number (NIN).
Speaking at the fifth Edition of Future Investment Initiative Summit holding in Riyadh, Saudi Arabia, Buhari said his regime would keep encouraging public and private initiatives that increase investments in health, education, capacity building, youth empowerment, gender equality, poverty eradication, climate change, and food security.
A statement from the Presidency quoted the Nigerian leader as urging more interest in infrastructure such as healthcare and education, which “present enormous opportunities for investors in a country our size.
“Digital economy in Nigeria has many potential for investment, as it has remained the fastest growing sector in both 2020 and 2021. Nigeria has many opportunities for investment in broadband, ICT hardware, emerging technology and software engineering.
“We have recently approved the national policy on Fifth Generation (5G) network. Our aim is to attract investors in healthcare, smart cities, smart agriculture among others. The benefit of real time communication will support all other sectors of the economy,” he noted.
To further improve and reposition the economy to attract investors, the president said, “e-Naira, the electronic version of our national currency, which puts us on track to become the first African country to introduce a Central Bank Digital Currency” was launched on October 25, 2021.
“We believe this and many other reforms will help us increase the number of people participating in the banking sector, make for a more efficient financial sector and help us tackle illicit flow of funds.
“To further strengthen our anti-corruption drive, increase accountability and transparency, we have centralized government funds through a Treasury Single Account, and ensuring that all Nigerians with a bank account use a unique Bank Verification Number (BVN).
“These initiatives, coupled with our nationwide National Identification Number (NIN) exercise, reinforce our efforts to tackle corruption and fraud. We believe that this should give investors a lot of comforts.”
Buhari attributed growing social unrest to inequalities and unfair policies that exclude the majority from opportunities for participation, admonishing world leaders and global investors to prioritise inclusive and humane policies.
He said, “By so doing, it will go a long way in reenergizing the global economy in a post-COVID-19 era.
“Nigeria is Africa’s largest economy and most populous nation. Our economic reforms which focus on ‘humane’ investments are ideal for investors looking to have profitable returns while positively impacting the citizenry.”

Former President Goodluck Jonathan, yesterday, recommended the implementation of homegrown solution to tame the scourge of cancer in Nigeria.
According to him, such measures would ensure that the nation makes significant progress in cancer management and treatment.
He also stated that Africa bore a heavy burden of cancer, with a significantly high mortality rate, adding that a recent projection by the World Health Organisation (WHO) indicated that over 70 per cent of cancer deaths occur in low- and middle-income countries, many of which were in Africa.
Jonathan stated this in Abuja during the 28th annual Lift Above Poverty Organisation Development Forum, a non-governmental organisation committed to the social, health, and economic empowerment of poor and vulnerable persons in Nigeria with the theme: ‘Promoting community-based cancer control programme in Nigeria’.
He said, “A recent projection by the World Health Organisation indicated that over 70 per cent of cancer patients occur in low and middle-income countries, many of which are in Africa.
“The reason for this most times may be due to late detection and referral for treatment, poor access to treatment thus account for the high mortality rate in poorer countries.
“These delays in diagnosis and proper referrals lead to a situation where a high percentage of cancer cases arrive at the point of treatment at advanced stages of the disease when it is difficult to recover from or even manage.
“Cancer management is quite expensive and a technology-dependent endeavour, but homegrown solutions such as the community-based LAPO C4 present us with hope.
“With the required effort and manpower, we can evolve a system that works for our peculiar environment and give us the best possible outcomes and reduce the possibility of loss of lives.
“I believe that LAPO Community Campaign for Cancer Control was born out of the need to galvanize people and resources around the critical issue of early detection of cancer as well as its proper management and treatment.
“The community-based approach to creating the early detection awareness campaign and controlling the spread and management of cancer from the bottom up as proposed by LAPO is quite laudable.
“This is because it promises to deliver better treatment outcomes through early diagnosis and referrals. I believe that a collaborative and community-based health care system will go a long way to improve our health sector.
“I believe that as more stakeholders key into this initiative there will be an uptick in awareness and pooling of resources to effectively manage and treat cancer. A strategic awareness campaign such as this will also go a long way towards eliminating the fear and misconceptions people generally have that cancer is a death sentence.”

The Executive Secretary of the National Human Rights Commission (NHRC), Mr Tony Ojukwu, has urged the police and other security agencies in the nation’s capital to do everything within their powers to locate a missing journalist.
This is just as journalists, editors and media owners across the country have charged security agencies to immediately locate and secure the release of Tordue Salem, a Vanguard Newspaper’s House of Representatives Reporter, who reportedly went missing on October 13 in the Federal Capital Territory, Abuja.
Ojukwu’s call is contained in a statement signed by the Deputy Director, Public Affairs in the commission, Mrs Fatimah Mohammed.
He expressed sadness over the news of the National Assembly Correspondent who has been missing for 15 days.
“There is no place for enforced disappearance in modern history”, he said, describing the act as one of the worst human rights violations which leave the victims, family members and the society traumatised.
“It is needless for the family members of the journalist to go searching for him in hospital mortuaries and police stations if the security situation and intelligence gathering was better.
“NHRC stands for press freedom and will continue to advocate for same.
“A free press is important because people are able to express themselves in a constructive manner such that the views and concerns of ordinary people are also heard,” Ojukwu said.
He added that journalists serve as the watchdogs of any society and should be allowed to do their work without harassment and intimidation.
Ojukwu further said that the role of a journalist is crucial in a democratic society like ours.
He described Salem as a journalist who has passion for his work.
“He has painstakingly reported human rights issues as well as educated the masses on their rights since his days with the LEADERSHIP Newspaper.
“Enforced disappearance is one of the hazards associated with the practice of journalism in Nigeria” Ojukwu added.
He, therefore, called on the authorities to respect the rights of journalists.
He also urged the journalists to always work within the ambit of the law and ethics of the profession.
He assured the family members of the commission’s support to ensure that Tordue Salem is found and reunited with them.
The FCT Commissioner of Police, Babaji Sunday, last Monday, assured that officers are looking for the journalist.
Sunday said the case was reported at the National Assembly Police Station and that he directed the immediate transmission to all Areas and Divisions.
“We are seriously on the matter. However, we have not received any information about kidnap or demand for ransom.
“My men have not received any information about any corpse on the road or abandoned corpse from the mortuary. We are searching,” the CP added.
The commissioner made the remark while responding to the demand by journalists under the auspices of FCT Council of the Nigeria Union of Journalists (NUJ), during a protest march to the police command headquarters in Abuja, led by its Chairman, Emma Ogbeche.
The journalists took the protest to the Force Headquarters where they delivered same demand to the Inspector General of Police.