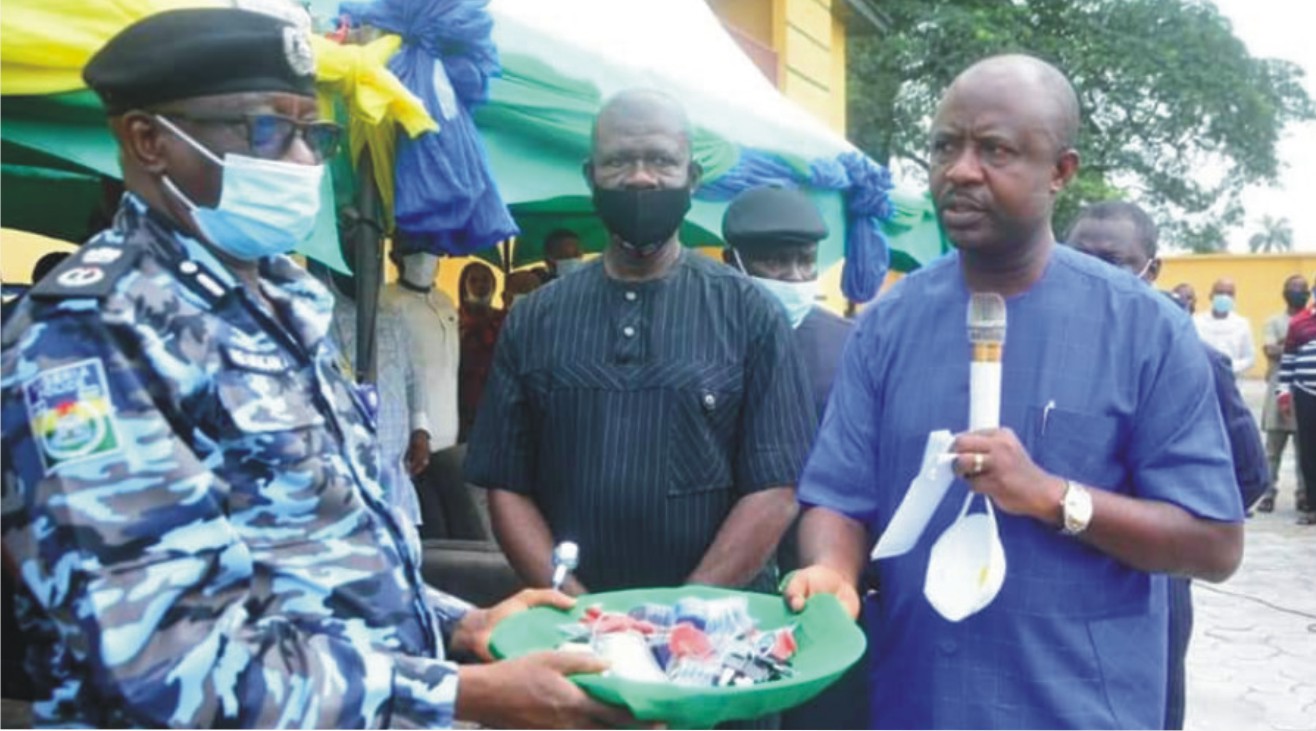 The Secretary to the Rivers State Government, Dr. Tammy Danagogo, has reiterated Governor Nyesom Wike’s resolve to the protection of lives and property of Rivers people.
The SSG said that it was not surprising that the governor popularly referred as ‘Mr. Quality Projects’ leaves no stone unturned to guarantee the safety of all persons who live and do business in the state, as the governor has intensified efforts to ensure peace and security through deliberate projects’ delivery and manpower development.
Danagogo stated this during the hand-over of fully furnished Kpopie Police Station, consisting of an administrative building and nine units of living quarters for police officers to the state Commissioner of Police, Joseph Mukan, in Gokana LGA.
The SSG said, “the peace and security of the state is paramount”, adding that, “without peace, there can be no development in communities.
“As we look to government to provide development, there must be enabling environment to deliver on their promises, which is your cooperation.
“As the chief security officer of the state, the governor has asked me to hand-over this facility to the Nigeria Police to ensure that the police live up to their expectation of protecting lives and properties of all persons.
“I urge the police personnel here to take care of this facility, and match the governor’s expectation for safety. When you do your work right and fight insecurity, you do it for humanity and God”, he said.
He thanked the Dekor and Deyor communities for donating the land for the project.
“We appreciate members of the Dekor and Deyor communities of Gokana for providing the land for the construction of the station. It does not stop here; continue to cooperate with government and the police to ensure complete security in this area. If you vandalize this facility, you shoot yourselves on the feet.
“I also urge the youths to cooperate with the security agencies, desist from vandalism and other vices that may compromise the security of this area,” he emphasized.
The elated Commissioner of Police, Mr. Joseph Mukan, thanked Governor Nyesom Wike for always fulfilling his promises and ensuring the development of the state.
“We assure you that, by providing comfort for our men, the men deployed to this area will provide their service to the best of their abilities with visible results for all to see. People will sleep with their eyes closed since the police are working with modern surveillance and logistics facilities for the entire state”, he stated.
He also promised to deploy members of the trained community police personnel from the Gokana environment to the community.
In the same vein, the Rivers State House of Assembly member representing Gokana Constituency, Hon. Dumle Maol, thanked the governor for the station, which he remarked, was the first of its kind in the state.
He added that the station and other projects serve as evidence of the governor’s widespread projects in all parts of the state.
The contractor represented by the project engineer, said that the station houses an administrative block of offices, conference hall and cell, a four-bedroom apartment for the DPO and eight blocks of two-bedroom apartments for other officers, fully-equipped with state-of-the-art facilities.
In his remarks, the Gokana LGA Chairman, Hon. Paul Kobani, thanked the governor for ensuring peace and development of Ogoni people with another laudable project.

The Rivers State Governor, Chief Nyesom Wike, has assented to two bills passed into law by the state House of Assembly to enhance access to quality healthcare and enable government fulfil contractual obligations.
The bills signed into law by the governor include, Public Procurement (Amendment) Law No.1 of 2021 and Contributory Health Protection Programme Law No.3 of 2020.
Wike, who signed the bills into law at the Government House, Port Harcourt, last Monday, said with the signing of the Contributory Health Protection Programme bill into law, residents and people of the state who want health insurance can now participate in the scheme.
“Let me on behalf of the Executive Council sincerely thank the Speaker and members of the state House of Assembly for passing into law Public Procurement (Amendment) Law and Contributory Health Protection Programme Law, particularly the second one that has to do with health.
“This is something that has become a reality, today. We have had a lot of pressure from people and also Nigeria Medical Association so as to give health insurance to those who would want to participate. It is not compulsory for those who want to leverage of it in order to promote their health system.”
The governor urged civil servants in the state to leverage on Contributory Health Protection Programme to boost their health status.
Wike further explained that the Public Procurement (Amendment) Law, will enable the state government fulfill its contractual obligations.
He attributed the reason why contractors often ask for contract variation to low percentage of the project sum they receive from government.
According to him, this also results in delays fulfilment of contractual obligations.
“Government ought to a lot pay penalty, because under the law, if a contractor is not paid as at when due, there ought to be sanction against the government.”
The governor said the need for the state government to expedite and fulfill its contractual obligations, necessitated the amendment of the Public Procurement Law.
The Speaker of the Rivers State House of Assembly, Rt. Hon. Ikuinyi-Owaji Ibani, said the two bills signed into law by Wike are critical elements in developing society.
He stated that with the signing of the Contributory Health Protection Programme Law, it is now incumbent on the Ministry of Health and health providers to engage in intense campaign so that residents of the state could avail themselves of the immense benefits of the scheme.
The speaker noted that the huge investment made by Wike in both primary and tertiary healthcare is geared at providing universal health coverage for the entire population.
Speaking on the Public Procurement Law, the speaker said the Assembly saw the lapses in the last law, and decided to amend it, given that the exigencies of today is different from the exigencies of yester years.
Earlier, the Majority Leader of the House, Hon. Martins C. Amaewhule, informed that the state lawmakers, essentially amended Section 32 of the Procurement Law, which actually provided for about 30 per cent mobilisation to contractors to enable government fulfil contractual obligations.
He explained that it had become necessary to amend that section of the principal law to provide enable the Rivers State Executive Council to make provision for over 30 per cent of the contract sum to contractors whenever the need arises.

A Magistrate Court sitting in Port Harcourt has convicted one Goodnews Thompson and Kperebong Emmason to 24 years’ imprisonment with hard labour for stealing and trafficking two years and four months’ old Etim Gospel George.
The court sentenced the two on three-count charges bothering on child stealing, conspiracy and trafficking of Etim Gospel George on October 18, 2018, at Kom-Kom village in Oyigbo Local Government Area, Rivers State.
He is yet to be seen till date.
Delivering her judgement, last Monday, Chief Magistrate Felicitas Amanze, found Goodnews Thompson, the 1st Defendant; and Sunday Jonah, 2nd Defendant who was deceased while in prison as well as Kperebong Emmason, 3rd Defendant, guilty for stealing and selling little Etim George at the sum of N350,000.00.
The court found them guilty under Section 39 of the Child Rights Act, for stealing an only son of one Mary Gospel George, a widow, who lost her husband sometime last year in a pipeline fire outbreak at Kom-Kom.
Amanze sentenced the convicts to seven years’ imprisonment on count 1, seven years on count 2, and 10 years on count 3, making a total of 24 years’ imprisonment with hard labour, which will run consecutively.
Speaking to newsmen, Counsel representing FIDA, Kemi Ogunaike commended the court for ensuring that justice was served in the matter.

The Economic Community of West African State (ECOWAS) Court of Justice has ruled against the Federal Government of Nigeria on the suspension of Twitter, saying that the app was a fundamental right.
The ECOWAS Court also ruled that the Federal Government cannot arrest or prosecute anybody for using Twitter.
It would be recalled that the Socio–Economic Rights and Accountability Project (SERAP), had last Sunday, released a statement that it had dragged President Muhammadu Buhari and the Federal Government to court for placing a ban on Twitter.
The Federal Government, in defence, told ECOWAS Court in a document made available to newsmen, that it suspended the service of Twitter Inc. in compliance with the relevant provisions of its domestic laws.
“The suspension was premised on reasons of national interest and national security of Nigeria.”
It also stated that the suspension of the operation of Twitter in Nigeria has nothing to do with the account of individual twitter users in Nigeria.
The Federal Government also challenged the capacity of the court to sit on the subject matter, stating that, “This Honourable court lacks the jurisdiction to determine the criminalisation of an act under Nigerian domestic laws.”