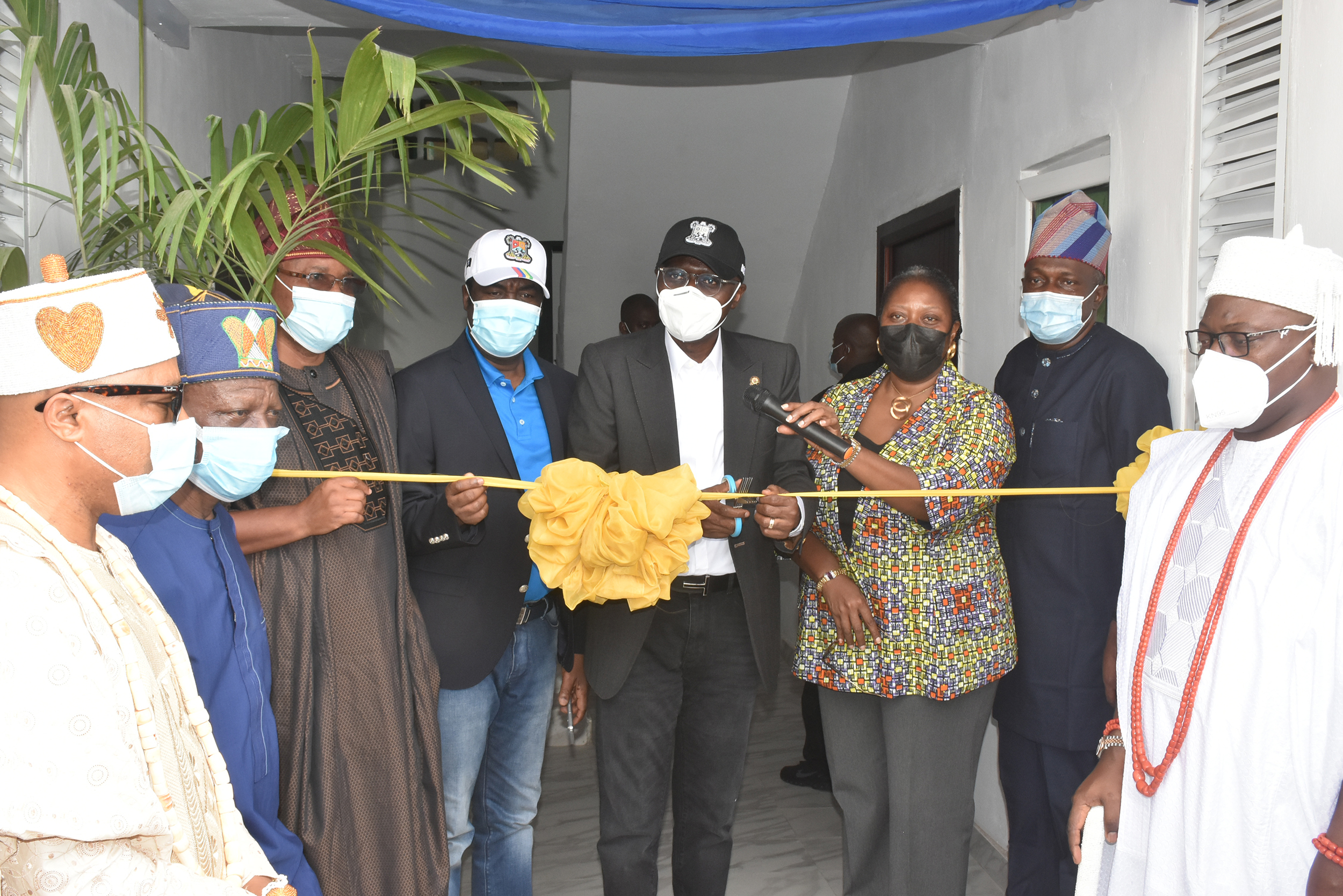 The Nigerian National Petroleum Corporation (NNPC), yesterday, said its downstream subsidiary, Petroleum Products Marketing Company (PPMC), recorded a total of N158.04billion from the sales of white product in the month of October, 2020.

This is an increase of 92 percent, when compared to N80.15billion recorded on the previous month of the same year.

According to the corporation’s October, 2020, edition Monthly Financial and Operations Reports, MFOR, made available to newsmen by its Group General Manager, Group Public Affairs Division, Kennie Obateru, a total revenues generated from the sales of white products for the period October, 2019 to October, 2020, stood at ?1.95trillion, with Premium Motor Spirit (PMS) accounting for about 99.07% of the total sales with a value of over ?1.9trillion.

In terms of volume, the October, 2020, sales figure translates to a total of 1.224.54 billion litres of white products sold and distributed by PPMC within the period compared with 603.39 million litres in the month of September, 2020.

In the month under review, 23 pipeline points were vandalized representing about 10% increase from the 21 points recorded in September, 2020.

In the Gas Sector, a total of 214.07 Billion Cubic Feet (bcf) of natural gas was produced in the month October, 2020, translating to an average daily production of 6,908.34 Million Standard Cubic Feet per Day (mmscfd).

The daily average natural gas supply to power plants increased by 8.60% to 745mmscfd, equivalent to power generation of 2,801Megawatts.

In terms of natural gas off take, commercialization and utilization, out of the 208.96 BCF of gas supplied in October, 2020, a total of 118.40 BCF of gas was commercialized, consisting of 38.07 BCF and 88.90 BCF for the domestic and export market, respectively.

This translates to a total supply of 1,269.03mmscfd of gas to the domestic market and 2,870.57mmscfd of gas supplied to the export market for the month.

This 63rd edition of the MFOR highlights NNPC’s activities for the period of October, 2019 to October, 2020.

In line with the corporation’s commitment of becoming more accountable, transparent and driven by performance excellence, NNPC has continued to sustain effective communication with stakeholders through this report via publications on its website and in national dailies.

The Executive Secretary of the National Human Rights Commission, Mr Tony Ojukwu, has called for the prioritisation of child rights issues in both the national and state budgets.
Ojukwu, represented by Abdulrahman Yakubu,  director, political and civil education rights in the commission made the call in Abuja at an event organised by the commission to commemorate the 2021 International Day for the African Child  (DAC), celebrated every June 16.
He also called for alignment of national implementation plans of the Child’s Rights Act with international action plans like the Agenda 2040 and the Sustainable Development Goals (SDG) agenda to ensure a more holistic and measurable implementation outcome
“While progress has been made on the implementation of the Child’s Rights Act and Laws across the   states that have adopted it, challenges bordering on non-prioritisation of child rights in the budget, poverty.
“Harmful traditional practices, inadequate access to educational and health services, armed conflicts and more recently the COVID-19 pandemic have continued to slow down process across all sectors.
“I call on all concerned Ministry , Departments and Agencies and child-focused organisations to explore  new tools and innovations like technology and social media to accelerate the implementation of child-based laws and policies in the country,” he said.
He also called for the adoption and implementation of measures to ensure universal health coverage, access to quality health-care services for all while closing all gender and vulnerability gaps.
Ojukwu also called for equal access to compulsory and quality education to all children, including children in rural communities, the girl child, children living with disabilities, children in conflict and humanity settings.
“We must address the root cause of conflict and engage early warning mechanisms to eliminate the impact of armed conflicts on children” he said.
The executive secretary said the DAC serves as a strong advocacy and sensitization tool for implementation of children’s rights.
“Beyond honouring the memory of the fallen heroes, the DAC celebration calls for introspection and self-assessment by the AU member states on the level of child rights implementation in respective countries.
The theme for the 2021 DAC celebration as selected by the African committee of Experts on the Rights and welfare of the child, he said, 30 years after the adoption of the charter: accelerate the implementation of the Agenda 2040 for an Africa fit for children.
In a goodwill message, the Country Representative of UN  Women Nigeria, Ms Comfort Lamptey called for education-in-emergencies in Borno,  Yobe and Adamawa.
The country representative, represented by Patience Ekeoba,  National Programme Officer,  UN Women Nigeria,  Lamptey said that children of these three conflict affected states need education -in-emergencies.
“ In the north east of Nigeria, 2. 8 million children need education -in-emergencies support. No fewer than 802 schools remained closed and 497 classrooms are listed as destroyed with another 1, 392 damaged but repairable in Borno, Yobe and Adamawa.
“In addition to this,  the COVID-19,  insecurity and humanitarian crisis and other prevailing challenges have presented new and additional challenges,” she said
“A lot of countries in Africa have robust legal frameworks policies,  conventions and other frameworks that guarantee the rights of the child,” she added.

A Federal High Court in Abuja has rejected an application by the Economic and Financial Crimes Commission (EFCC) to amend its charge in the $9.8million, £74,000 fraud trial of an ex-Group Managing Director (GMD) of the Nigerian National Petroleum Corporation (NNPC), Andrew Yakubu.
Justice Ahmed Mohammed, in a ruling, yesterday, held that granting the application by the EFCC would amount to varying a subsisting judgment given by the Court of Appeal, Abuja on April 24, 2020, where it, among others, ordered Yakubu to enter defence in relation to counts three and four of the six counts originally contained in the charge on which he was arraigned.
Justice Mohammed was emphatic that allowing the prosecution (the EFCC) to amend the charge was tantamount to disobeying the subsisting order made by the Court of Appeal in its judgment of April 24, 2020.
The EFCC claimed that its operatives, acting on a tip-off, raided Yakubu’s house located on Chikun Road, Sabon Tasha area of Kaduna South Local Government Area of Kaduna State on February 3, 2017, and recovered the $9,772,800 and £74,000 cash kept in a fire proof safe.
It arraigned Yakubu on March 16, 2017, on a six-count charge relating to money laundering offences.
He was among others, accused of failing to make full disclosure of assets, receiving cash without going through a financial institution, which borders on money laundering and intent to avoid a lawful transaction under law, transported at various times to Kaduna, the aggregate sum of $9,772,800 and £74,000.
The prosecution closed its case on October 17, 2018, after calling seven witnesses.
The seventh prosecution witness, an operative of the EFCC, Suleiman Mohammed, spoke about how his team recovered the $9,772,000 and £74,000 cash in Yabubu’s house in Kaduna, which was later deposited in CBN in Kano.
At the closure of the prosecution’s case, Yakubu made a no-case submission, which Justice Mohammed, in a ruling on May 16, 2019, partially upheld by striking out two of the six counts contained in the charge and ordered Yakubu to enter defence in relation to the remaining four counts.
The judge was of the view that the prosecution failed to prove counts five and six of the charge, which related to allegation of unlawful transportation of the money.
“Even though I am tempted to discharge the defendant on counts one to four, I am, however, constrained to ask the defendant to explain how he came about the monies recovered from his house.
“Fortified with my position, the defendant is hereby ordered to enter his defence in respect of counts one to four,” Justice Mohammed said in the May 16, 2019, ruling.
Dissatisfied, Yakubu challenged the decision at the Court of Appeal, Abuja, which, in a ruling on April 24, 2020, upheld Justice Mohammed’s ruling and proceeded to strike out two more counts – one and two – in the charge.
The Court of Appeal, then, ordered Yakubu to enter his defence in respect of the remaining two counts – three and four.
Proceedings later resumed at the Federal High Court, with the defendant commencing his defence as ordered by the Court of Appeal.
But, on March 10 this year, the prosecution applied for leave to amend its charge, arguing among others, that the law allows the prosecution to amend charge at any stage of the proceedings before judgment.
The defence countered, arguing that the Court of Appeal, in its judgment of April 24, 2020, made an order to guide further proceedings in the trial.
It noted that the Court of Appeal ordered that the defendant was only to enter defence in relation to counts three and four in respect of which a prima facie case was established.
The defence urged the court to refuse the prosecution’s application for amendment and allow the defendant to continue with his defence, a prayer Justice Mohammed granted in his ruling, yesterday.
When the judge ended the ruling, yesterday, the defence indicated its intention to proceed with its case, but the court elected to adjourn till June 30 following plea by the prosecution for an adjournment on the grounds that the lead prosecuting lawyer was not immediately available.

An economist, Prof. Akpan Ekpo, has queried World Bank’s prediction that Nigeria’s inflation rate is expected to rise to fifth highest in Sub-Saharan Africa by the end of 2021.
Ekpo, a professor of Economics and Public Policy at the University of Uyo, Akwa Ibom State, questioned the prediction in an interview with The Tide source yesterday in Lagos.
Recall the bank’s Lead Economist for Nigeria, Macro Hernandez while presenting its six-monthly update on development in Nigeria on Tuesday, said Nigeria was lagging the rest of sub-Saharan Africa, with food inflation.
Hernandez included heightened insecurity and stalled reforms as slowing growth and increasing poverty.
The professor said: “First of all, we need to examine the methodology the World Bank used to arrive at the conclusion because we know that inflation has declined slightly.”
Ekpo, also Chairman, Foundation for Economic Research and Training in Lagos, said, however, that if government could solve the insecurity problems limiting economic growth and increase Agricultural production, the prediction might not hold.
According to him, there are countries with double digits inflation and still doing well.
“This means you can have inflation and yet your GDP is growing, so, it’s when you have what we call run-away or hyper inflation that is when you get worried.
“Run-away inflation means that prices are increasing everyday or every month without control,” he said.
On predictions that the inflation would push seven million more Nigerians into poverty due to falling purchasing power, Ekpo gave a suggestion to the federal government to stem it.
He urged the Federal Government to seriously implement the National Poverty Reduction with Growth Strategy Programme and the Economic Sustainability Plan documents.
“I cannot fault them on this one because already, the National Bureau of Statistics (NBS) said about 85 million Nigerians are living in poverty.
“So, World Bank just saying that confirms what our own NBS has already said.
“Now, if the government implements the National Poverty Reduction initiative document as well as the Economic Sustainability plan seriously, then we can begin to reduce the poverty rate.

“Then the economy must grow double digits, that is, 10 per cent and above for us to see reduction in poverty and more jobs creation as well, because poverty is linked to unemployment,” he added.