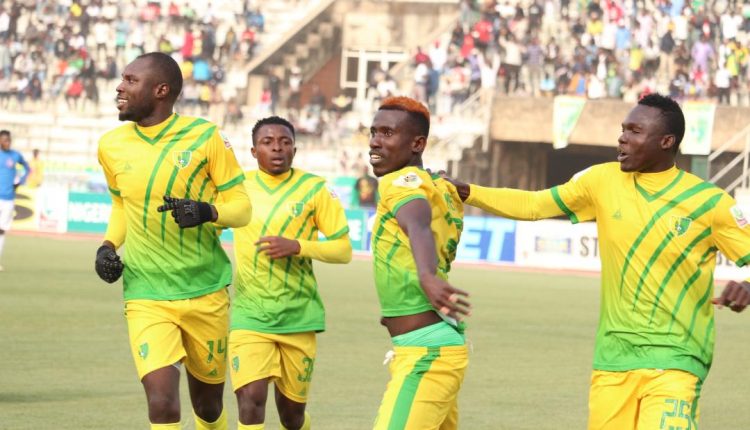 Plateau United FC of Jos has assured supporters of victory in its Nigeria Professional Football League (NPFL) week four encounter with Kano Pillars FC in Kaduna.
General Manager of the Club, Mr Pius Hawen while speaking to newsmen yesterday in Jos, said that the team had made adequate preparation towards the forthcoming match.
Hawen, who commended the team for the good performance last Sunday, where it trashed Heartland FC of Owerri 3-0 in the week three of NPLF, urged them to use the new form to win against Kano pillars.
The GM said, with the return of some of the players, the Lalong Boys have bounced back and would retain the position as the champions.
“I am so pleased with the performance of the team last weekend and want to assure our fans that we shall maintain the tempo in our subsequent matches.
With the return of the team’s regular players such Oche Ochowechi, Isah Ndala, Andrew Ikefe, Abba Umar and Mike Zaruma, Kano Pillars will be in for a big trouble contending with us, particularly that our strength lies in the midfield where they dictate the game.
“Also, with the team’s captain and talisman, Rabiu Ali, still anchoring the midfield for the Masu Gida, the experienced player has the capacity to influence any match with defence split passes to his forward to do the damage, no team can afford to take him for granted.
“So, by the special grace of God, we will come back victorious against Kano Pillars,” he said
He, however, admitted that Kano Pillars is also a tough team as their experience and pedigree in the NPFL makes them a hard team and called on his players to brace up.
Tidesports source gathered that the match between Plateau United and Kano Pillars would be decided at the Ahmadu Bello Stadium, Kaduna.

Regard Sports As Tool For Job Creation – Deputy Gov