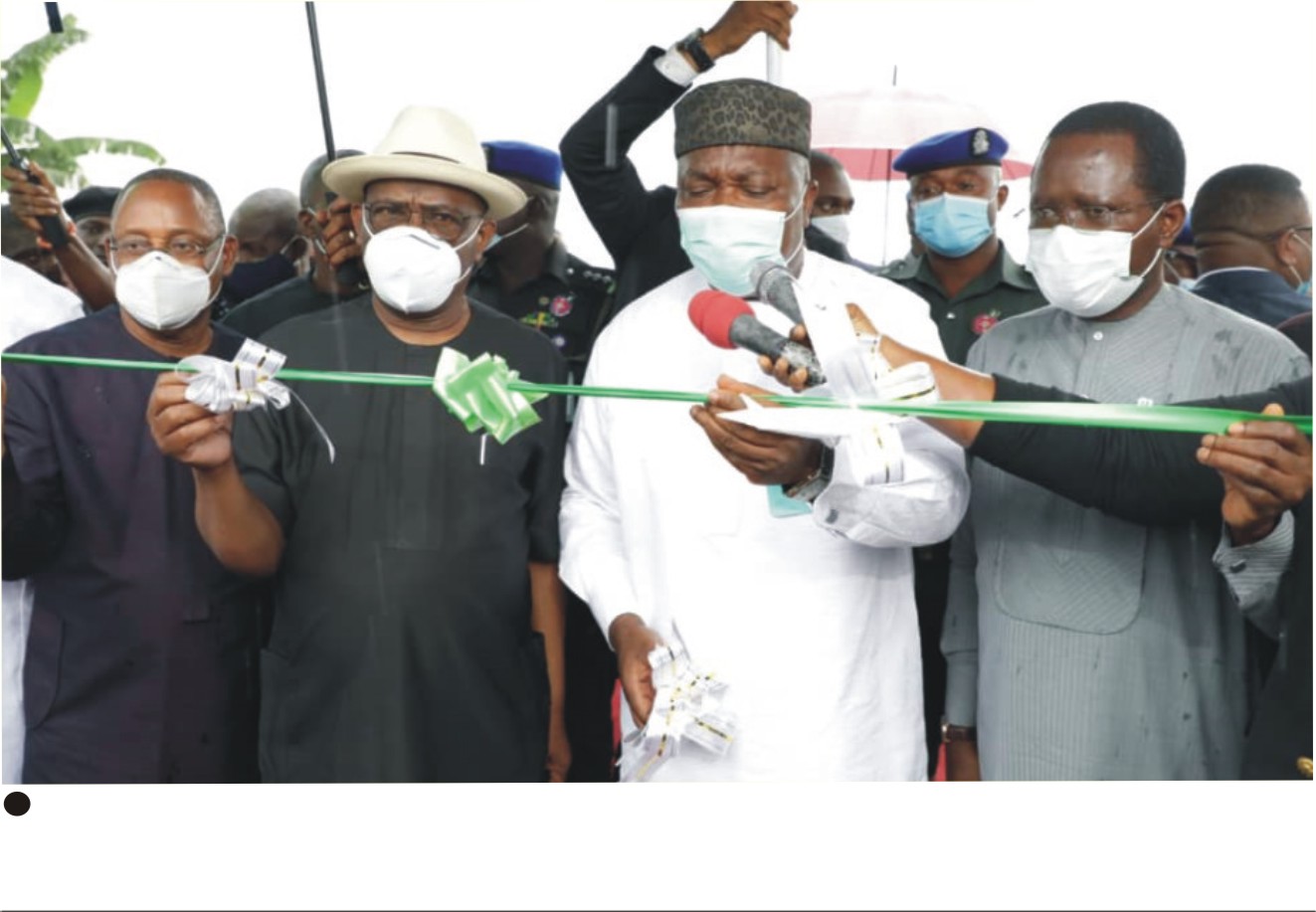 The Rivers State Governor, Chief Nyesom Wike, says the Federal Government has been playing politics with the Ogoni environment remediation programme recommended by the United Nations Environment Programme (UNEP).
He noted that Ogoni, having played a pivotal role in the economic development of Rivers State and the country, deserves more than what was currently being offered to the area.
Wike stated this during the commissioning of the 16.06kilometers dual carriage Saakpenwa-Bori Highway by the Governor of Enugu State, Dr. Ifeanyichukwu Ugwuanyi in Bori, Khana Local Government Area of Rivers State, yesterday.
The governor urged Ogoni people to stop believing those who use Ogoni clean-up exercise at the turn of election year to deceive them, and wondered why clean-up never happens when elections are over.
“I am not like the Federal Government. They promised you they will do Ogoni clean-up. Has it been cleaned? I promised you road, have I done it? So, you can see the difference between our party and their own party. The difference is clear.
“When election comes in 2023, they will start another clean-up. You people don’t even ask question. Why is it a year to election that Ogoni clean-up will always commence? Now, that there is no election, are they doing clean-up now? Watch from next year, they will start clean-up.”
Wike said it has remained undisputed that only the governors of the Peoples Democratic Party (PDP) were delivering development projects to their people.
The governor challenged those who feel uncomfortable with his public declarations to also showcase their projects and invite persons of repute to commission them as he has done since December.
He stated that because of the existing mutual trust between his leadership team and the people, sufficient progress have been achieved in Ogoni land and in the entire state in terms of project delivery.
Wike announced the commencement of the phase two of the newly commissioned road, which will now be from Bori to Kono, adding that contract for the project would be awarded to the same construction firm, CCECC, which handled the first phase.
“Let me tell you, I will dualise from here, Bori to Kono. It will be handled by the same contractor to maintain the same standard.
“So, when I finish and go, I will tell Ogoni people that it was in my tenure that you got road; dualised road, from Saakpenwa to Kono with streetlights.
“This is what we call development. You can leave Port Harcourt and come back home any day, any time. This is what makes a city.
“When I say Peoples Democratic Party (PDP) governors are doing well, people are angry. If they are doing well, let them call us. Is it hidden?
“PDP governors, we are challenging others, tell us what you’re doing. It is not to take money to go and buy one governor. That’s not it. We are talking about governors that are interested in the development of their people. We are commissioning projects.”
Wike said he promised and within the specified period, he had delivered to them what he promised to demonstrate that his party was different from others associated with failed promises.
The governor further directed the chairman of Khana Local Government Area to ensure that the installed streetlights were switched on every night to improve the security situation in the area.
In his remarks, the Enugu State Governor, Dr. Ifeanyichukwu Ugwuanyi, acknowledged that many projects have been inaugurated by Governor Wike, including the Saakpenwa-Bori Road, which was a campaign promise that has been fulfilled.
“Today’s event is significant as it epitomises the desirable fellowship among colleague governors while providing opportunity for experience sharing and other discourses on service delivery.
“I congratulate His Excellency, Governor Nyesom Wike on the accomplishment of this infrastructural milestone, among many others, which will undoubtedly make life more meaningful for the people of Ogoni land.
“I understand that this strategic road project was a campaign promise that has been truthfully fulfilled. Expectedly, it gladdens the hearts of Ogoni people and reinforces their faith in our constitutional democracy.
“I enjoin the good people of Ogoni land and entire Rivers State to continue to support Governor Wike with their prayers and wise counsel as he takes Rivers State to the next level.”
In their goodwill messages, former President of the Movement for the Survival of Ogoni People (MOSOP), Barrister Ledum Mitee, said several governors used the road as point of political campaigns, but all failed to fulfil such promises.
He said if the money wasted on the abandoned monorail by the immediate past administration was properly channelled, more flyovers and roads would have been achieved in the state.
Similarly, the President of KAGOTE, Hon Emma Deeyaah, said Governor Nyesom Wike has wiped away their tears and solved the nightmare situation that the road caused the people.
President of Gbokabari, Senator Ben Birabi, noted that such quality of roads was hardly delivered in Ogoni land, and said the governor has re-energised the spirit of freedom in the state and performed above expectations despite the lean financial resources.
Also speaking, the Rivers State Commissioner for Works, Hon Elloka Tasie-Amadi, said again, the Wike-led administration has demonstrated commitment in delivering long-term service projects that would enhance the socio-economic life of the people.
“This project is a 16.06km dual carriage way, with a 2m wide concrete median, an overall road width of 22.3m, drainage network of 12.02km, 480 double arm streetlight poles complete with transformers and generators to power the streetlights.
“It used to be a deplorable 7.3m wide road but what we have today is three times wider than it was then. If we were to stretch this road into a single carriage way, it would stretch from here all the way to Kono, a distance of about 36km from Saapkenwa. This is excluding the added mileage we would achieve by converting the concrete median and street lighting to asphalt pavement”, he added.

Be Bold To Hand Over Power To PDP In 2023, Wike Challenges APC