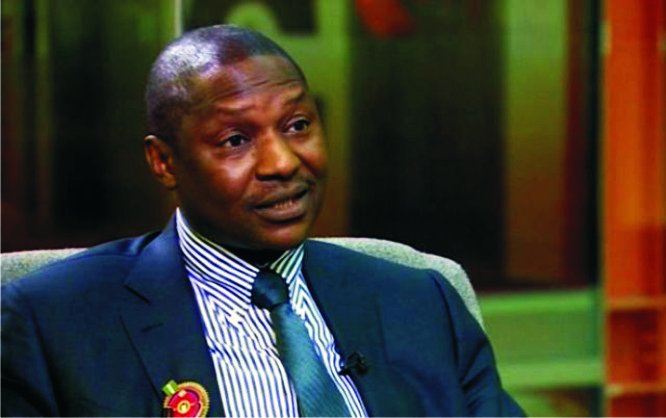 House of Representatives has refuted the claims by the Minister of Justice and Attorney-General of the Federation, AGF, Abubakar Malami that the National Assembly lacked powers to invite the President for questioning.
Briefing newsmen yesterday after plenary session, the Spokesman of the House, Hon. Benjamin Okezie Kalu insisted there was an official communication to Speaker, Femi Gbajabiamila after his visit to the Presidential Villa, assuring that the President would honour the invitation.
It will be recalled that on the account of a parliamentary resolution last week, the President was formally invited and scheduled to appear before the House yesterday to brief it on the lingering security challenge in the country.
The invitation, however, came on the heels of the dastardly killing of over 43 rice farmers in Zarbamari village, Borno State late November 2020.
Kalu who is also the chairman, House Committee on Media and Public Affairs hinted that it was possible that the ruling All Progressives Congress, APC might have prevailed on the president from coming.
He said that the House was yet to officially receive any communication from the President wherein it was expected that he would state his reasons for not coming.
“As you are aware when that motion was passed last week, it was rowdy because some members wanted the President to be there while some felt otherwise.
“But majority of the House took the mandate of their constituents, moved a resolution even against the position of the Speaker. If you were there, the Speaker struggled to make sure the House toe the line of using alternative approach to it. But the decision of the parliament overrides the presiding officers because to do otherwise will be bias and undemocratic.
“As a mark of honour, the leadership of the House sent a delegation, that’s the Speaker, Deputy Speaker and House Leader to engage the President beyond the resolution of the House. When they met with Mr President, he assured them that he will visit and address Nigerians. As the days went by, it was narrowed to Thursday.
“There were official communication from the Presidency committing to the position of Mr Speaker that the President has accepted to come. So, the Speaker and Deputy were not operating on the frolic of their own. It was backed up by the President. Up to that extent, we felt very honored by Mr President.
“Our channel of communication is not with the Attorney General. He’s not part of the Presidency neither is he a judge. His position cannot be seen as the position of the APC. I insist that no official communication from the Presidency to counter the initial position.
“We have not received any formal communication. Up till this moment, we have not received a formal communication from the office of the President stating that this appointment has been cancelled or shifted.
“Until we receive a contrary position in a formal form where reasons they will not be coming will be explained, it will be difficult for me to jump the gun at this point. Wait until you receive formal communication from the Presidency. If he’s not coming, the reasons will be highlighted and we will communicate that to you.”
“We have constitutional powers to invite Buhari, anyone for information “All you’ve read about has been from unofficial sources”, he said.

New Electoral Act Will Be Used Next Year