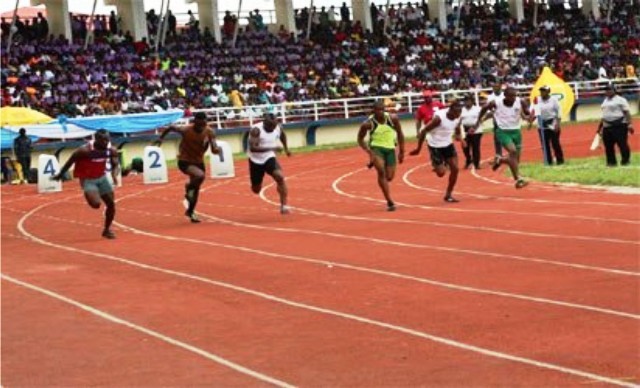 No fewer than 12,000 athletes, officials and dignitaries would be expected to storm Bayelsa State to grace the 39th edition of the Annual Public Games billed to kick off next month in the state.
The National President of the Federation of Public Service Games/(FEPSGA) organisers of the games, Comrade Aloku Amaebi dropped the hint yesterday in a telephone interview with Tidesports.
According to Amaebi, the athletes and officials will be drawn from the various ministries departments, agencies and parastatals in a the country.
Speaking further, Comrade Amaebi, who is an indigene of Bayelsa State maintained that the Head of Service of the Federation and pillar of sports in public service of Nigeria, Dr. Folashade Yemi Esan, who also doubles as patron of the organising body will be among the dignitaries’ on the economic importance of the national sport event.
“This will provide a veritable platform to showcase the natural endowments of the people of Bayelsa State to the rest of the world. It will also promote the state, create ready market and patronage for the state as well as advance the image of the state as indeed the glory of all land,” Amaebi said.
On the formal request to the Bayelsa State Government to host this edition of the annual sports competition for public servants in Nigeria, Comrade Amaebi maintained that efforts are on to persuade the Douye Diri’s administration to host the games.
He recalled that in 2010, the 29th edition of the games was hosted by the Honorable Patrick Yakowa led administration in Kaduna State, stressing that it helped to open up the local economics of the state.
Meanwhile, the letter to the Governor requesting him to host the historic games sighted by Tidesports source read in parts: “Your Excellency is therefore, requested to sponsor this year’s games scheduled for December, 2020 by assisting the federation with funding and provision of the followings: sports facilities, accommodation for invited dignitaries, security, provision of ambulance and other medical services.”
In the meantime, Ekiti, Kaduna, Cross River and the Federal Capital Territory (FCT), Abuja are competing to host the 39th edition of the games.
The National President assured the Executive Governor of Bayelsa State that the organising body will adhere strictly to the COVID-19 protocols.