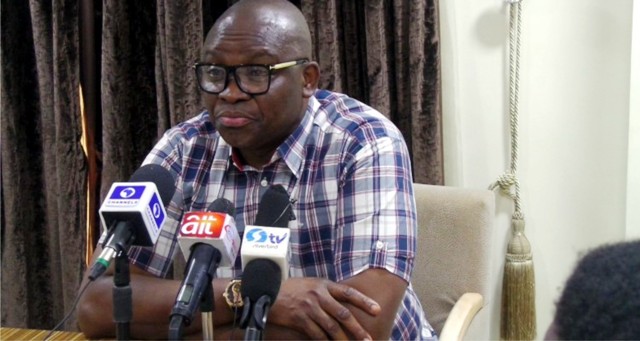 The Peoples Democratic Party (PDP) in Ekiti State has counselled the state Governor, Dr Kayode Fayemi, to seek help from his immediate predecessor, Ayodele Fayose, on how to tackle insecurity in the state.
The party said it was worried that in Ekiti State that was once adjudged as the most peaceful state in the Southwest, two major kidnappings were witnessed within 24 hours, in which two people were killed while government sponsored armed thugs now go about attacking people on the streets and their business premises.
According to a statement yesterday, by the State Publicity Secretary of the PDP, Raphael Adeyanju, it has become necessary that Governor Fayemi should ask Fayose to lecture him on how issue of security of lives and properties was handled when he was governor.
The PDP said rather than jumping from one place to the other, struggling to be the presidential candidate of the All Progressives Congress (APC) in 2023, Governor Fayemi should face governance in Ekiti and make the State safe for residents and visitors.
The party pointed out that it was on record that at a point in Ekiti State, when there were kidnappings along the road from Ita Awure to Iwaraja in Osun State, the Ekiti State government under Fayose rose swiftly to the occasion by bringing soldiers from Ibadan and Akure to comb the forests and dislodge the kidnappers.
“Today, almost all the roads leading to Ekiti State have been taken over by bandits, who have turned the State to a major catchment area for their kidnapping business.
“Two weeks ago, a certain Taju, who sells cows in Okemesi Ekiti was abducted along Okemesi – Ikoro Ekiti road and N5 million had to be paid as ransom to secure his release.
“On Friday, a policeman was killed while a Chinese engineer was abducted along Ado-Iyin Road, in Ekiti State. The gunmen killed the police officer and shot another person in the process of abducting the Chinese.
“Also on Friday, Vicars of the First Baptist Church, Ikere Ekiti, Reverend Johnson Oladimeji, was killed by suspected kidnappers along Ikere-Igbara Odo road while a Lexus car was snatched from a woman at gunpoint on at covenant area Ikere road.
“In Omuo, a little boy was nearly abducted by kidnappers last week and it took the intervention of residents to rescue him.
“Even one his Commissioners, Olabode Folorunso, was abducted in March, this year and had to pay ransom to regain his freedom. Yet, Governor Fayemi has not seen reasons he should admit his failure in term of securing the people of Ekiti State, despite claiming to hold PhD in War Studies.
“So, is Fayemi waiting for Ekiti State to become another Katsina or Borno State before he will perform his major function as a governor by seeing to the safety of the people? Or is his 2023 presidential ambition more important than the lives of Ekiti people?”

Egwu Denies Plot To Cause Crisis In Ebonyi