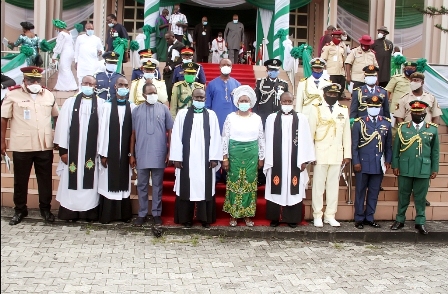 Bayelsa State Governor, Senator Douye Diri, says as a way of giving back to his community, he would ensure the expansion of the St. Peter’s Anglican Church in his community, Sampou in Kolokuma/Opokuma Local Government Area of the state.
Senator Diri stated this last Sunday at the church’s 2020 Annual Adult Harvest Thanksgiving Service with the theme: “Build My House That I May Take Pleasure.”
A statement by his Chief Press Secretary, Mr Daniel Alabrah, quoted the governor as promising that the church’s expansion project would be achieved within record time.
Acknowledging the supremacy of God in the affairs of men, the governor stressed that power flows only from God and He bestows it on whoever He pleases.
According to him, he has passed through many trials with God guiding him to becoming the number one citizen of the state.
Senator Diri who paid tributes to his father for the strong Christian foundation he laid for his children in the Anglican Communion, said having hailed from a humble background and a minority local government area in the state, it was clearly the handiwork of God for him to attain his current position and other offices he had occupied.
“A lot has happened in my life with God guiding me to where I am today and I know that this is not the end”, he said.
“I once again want to remind my brothers on the other side that it is God that gives power. Despite all the challenges, here we are standing strong like a rock. We came from a humble background but we are rich in our own ways because we were contented with what we had”, he added.
In his speech, chairman of the Harvest Programme and Managing Director, Bayelsa Electricity Company, Engr. Olice Kemenanabo, noted that judging from his life’s experiences over the years, there was every reason to appreciate God always.
In a sermon by the guest preacher, Bishop of the Anglican Diocese of Northern Izon, Funkuro Amgbare, underscored the need for people to put God first in all their dealings.
He said man as mere mortal has limitations but with Jesus Christ, there is nothing one cannot achieve.
Present at the service were the wife of the governor, Dr. Gloria Diri, a Reps member, Hon. Fred Agbedi, member of the Bayelsa House of Assembly, Rt. Hon. Tonye Isenah, Commissioner for Works and Infrastructure, Surveyor Moses Teibowei, his Environment counterpart, Iselema Gbaranbiri, former Secretary to the State Government, Chief Gideon Ekeuwei as well as a former Reps member, Hon. Gabriel Onyenwife among other dignitaries.