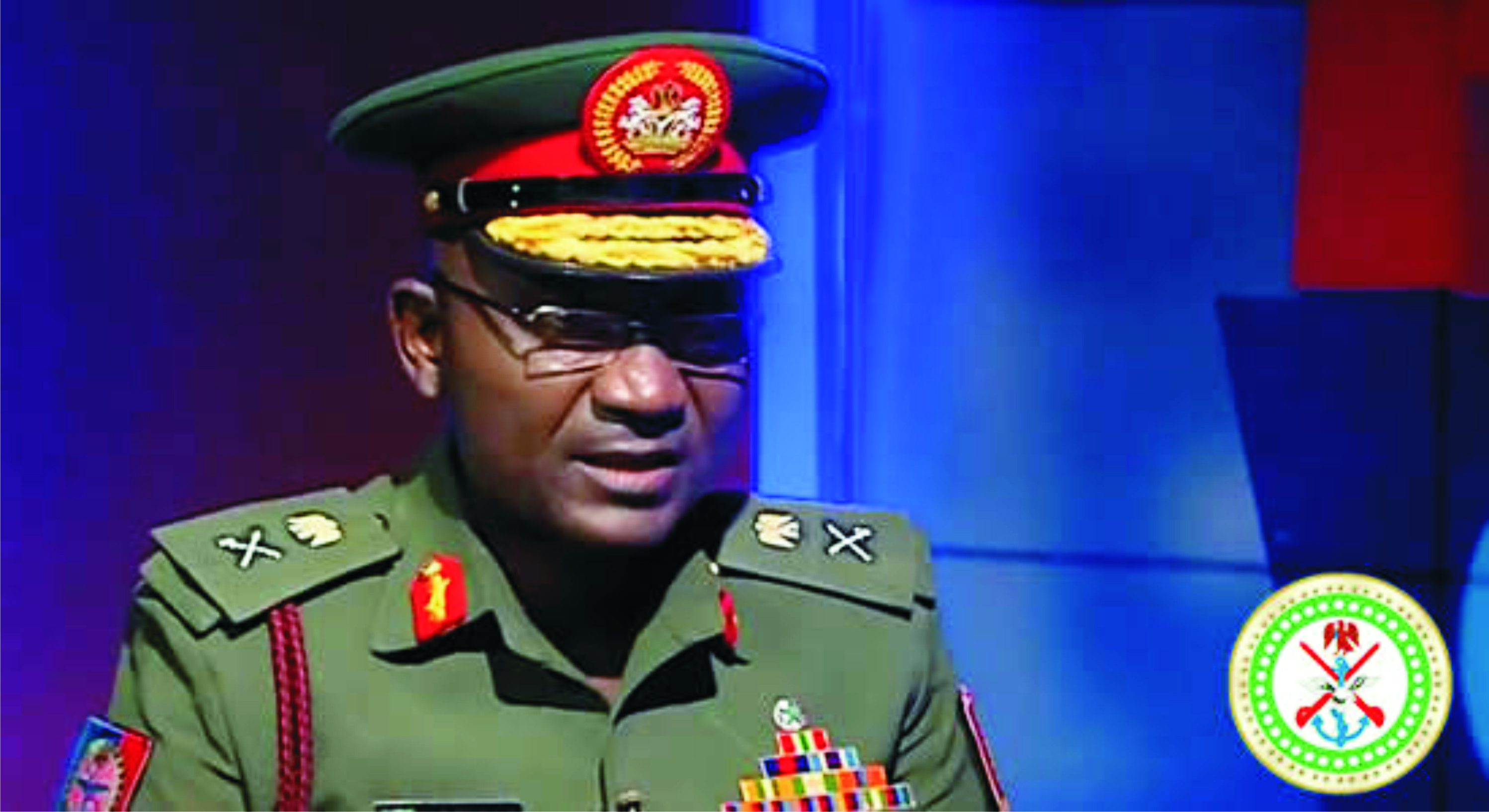 The military has achieved better results through intelligence-based operations in the fight against banditry, terrorism and other forms of criminality in recent times across the country.
Coordinator, Defence Media Operations, Maj.-Gen. John Enenche, made this known while briefing newsmen on the operations of the Armed Forces of Nigeria between November 5 and November 11, on Thursday in Abuja.
He said that while the troops had sustained the kinetic operations against the bandits and terrorists across theatres of operations, they had been able to apprehend many collaborators and informants through intelligence.
In the North West zone, Enenche disclosed that the Troops of “Operation Accord” on November 8, arrested bandits’ gun runners named Abubakar Mohammed and Ansi Janare at Tangaza Town in Sokoto State, based on intelligence.
He added that various arms and ammunition such as Light Machine Gun, AK47 rifle magazines, 586 rounds of 7.62mm NATO ammunition, 100 rounds of 7.62mm Special ammunition and one motorcycle were recovered from the suspects.
Enenche further disclosed that several bandits were eliminated in different air and land operation Katsina, Zamfara and Kaduna State during the period through credible intelligence.
In the North East, the Coordinator said that significant results were achieved through several land and air operations conducted by the military and other security agencies during the week under review.
He said the troops of Operation Lafiya Dole through the subsidiary Operation Fire Ball, eliminated five terrorists at Buni Gari in Yobe State on November 8 and recovered cache of arms and ammunition.
He added that a woman and three children were also rescued by the troops in an encounter with terrorists on same day at Miyanti in Bama Local Government Area of Borno.
According to him, the Air Task Force of OPLD neutralised several ISWAP fighters and destroyed some of their structures, including a suspected fuel storage facility, at Tumbun Allura, a terrorists’ logistics hub on the fringes of Lake Chad in the Northern Borno.
“The air raid was executed on November 8, on the heels of credible intelligence reports as well as aerial surveillance missions which led to the identification of a command post as well as a suspected fuel dump, with large number of jerry cans and barrels concealed in make shift structures within the settlement.
“The attack aircraft, engaged the location, scored accurate hits in the target area resulting in the destruction of the terrorists’ fuel dump.
“Several ISWAP elements were also neutralised as a result of the air strike,” he said.
In North Central, Enenche said the troops of Operations Safe Haven and Whirl Stroke, successfully conducted several raids on identified criminals’ hideouts in the zone during the period.
He said the troops of Operation Whirl Stroke, on November 7, apprehended a kidnapper and gang-leader one Mr Joshua Iliya at Kasit village in Zangon Kataf Local Government Area of Kaduna State.
According to him, the suspect and his gang members were allegedly involved in some recent kidnappings in the general area and he is undergoing interrogation to be handed over to the relevant prosecuting agency.
In the South-South zone, Enenche said the troops of Operation Delta Safe, arrested 10 crew men, a Tugboat and Barge loaded with 113 stolen pipes suspected to have been vandalised from the South Forcados Opukushi trunk line.
He also disclosed that troops on routine patrol around Utan Iyata creek on November 9, intercepted a medium size wooden boat laden with 72 drums of 300 litres with product suspected to be illegally refined AGO being transported to the Republic of Cameroon.