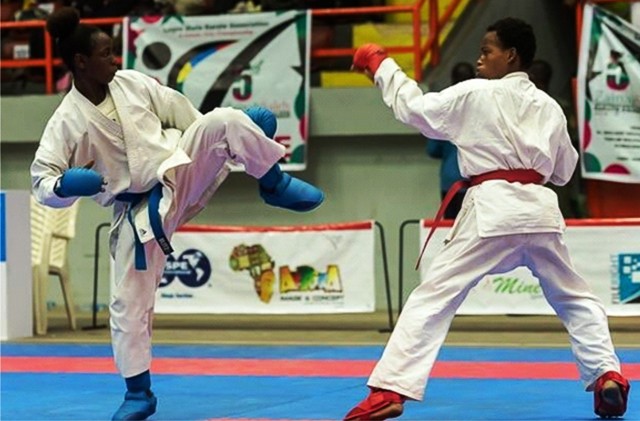 Head Coach of the Rivers State  Karate Association, Yahcob k. O Davies (Grandmaster) says his team will win gold medals at the forthcoming National Sports Festival (NSF) tagged “EDO 2020,” scheduled to hold next month in Edo State.
Davies made this known in an interview with Tidesports in Port Harcourt.
According to him, he has competent and seasoned karatekas on ground who are ready to deliver, when the chips are down, saying that though the team had been caught up in the COVID-19 crises, but would leave no stone unturned in achieving it’s goal.
“Yes, we spent sometime at home during the shutdown, but we didn’t stop in our individual training and we are poised to face any challenge that may be associated with the fiesta come next month,”  Yahcob k O Davies  said.
He however, frowned at inability of the state Ministry of Sports to sponsor the team to the recently concluded Karate competition, christened “South- East National Open Karate Championship”, held in Enugu State, saying that it would have been a better avenue to check, correct and improve on loopholes and technical lacunas in the team.
”Honesty, l’m not happy that we could not participate in the championship. It would have been a good chance to further prepare and fortify ourselves for the task ahead, notwithstanding, l have faith in my athletes and l am confident that they will do the state proud at the fiesta,” Coach Davies added.
The karate boss, explained that even though, Team Rivers Karatekas arrived late at the “Abuja 2018” festival and took part in just three event, they were able to win medals for the state.
It would be recalled that the team won a gold in individual -60 and -75 kg male and silver medal in individual -55kg female kumite at the Abuja 2018 National Sports Festival.