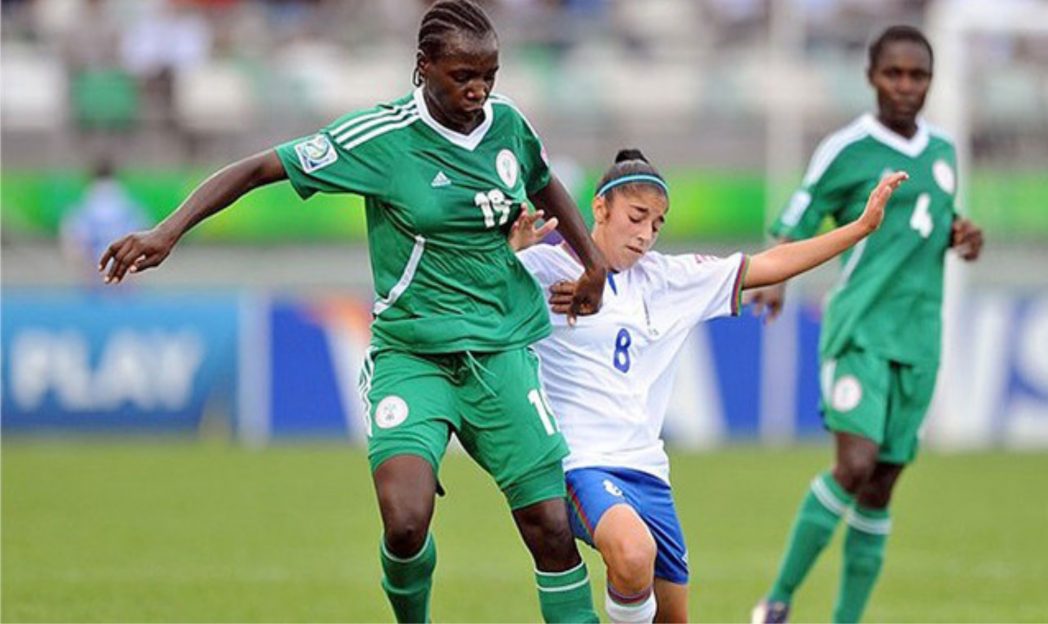 Former Super Eagles striker, Victor Ikpeba has hailed the achievements of Nigeria’s Senior Women National Team, the Super Falcons while advocating for further development of the women’s game in the country.
Such is the dominance of the Falcons in Africa that they have won nine of the 11 Africa Women Cup of Nations.
However, their supremacy on the continent has not been replicated on the global stage, with a solitary quarter-final placement in 1999, their best outing at the FIFA Women’s World Cup.
The 1997 African Footballer of the Year believes women’s football has ‘come of age’ in the country and, as such, needs to get to the ‘next level,’ where it can compete favorably and win laurels at the global stage.
“I think women’s football (in Nigeria) has come of age, it needs to get to the next level, especially back home,” the former Monaco striker told Tidesports source.
“We are all looking forward to the day when the Super Falcons will get to the finals of the Olympics, the finals of the World Cup.
“But so far, they’ve done well. I think we should be proud of women football so far. But we still need to develop our female football back home.
“Should we shy away from that? I think that is where we have to get it right because our girls are really passionate about female football.
The Nigeria Football Federation recently appointed American Randy Waldrum as the new Head Coach of the Super Falcons to replace Swede Thomas Dennerby who left the post last year.

Traders in Rumumoji Mile one Market in Port Harcourt, have scored the ongoing Traders Unity Football Competition high, in Port Harcourt.
Speaking with Tidesports on Wednesday, at the Rumumoji football field, an electronics seller, Emeka Uzoma, said the organisation of the competition was impressive, as it attracted huge crowd.
He described football as the means to peace and unity, saying that the competition has brought resolved disharmony and acrimonies among traders in the area.
“I am really excited because we are all here to enjoy the football matches which were put on hold for a long period.
The competition has reunited us again I thank the new exco for their initiation to bring back the tournament, you can see the excitement on the faces of the traders.
This is a welcome development, I commend the organisers for the good job,” Uzoma said.
In his reaction, another trader, Martins Akere, expressed joy over the impressive turnout of traders’ participate in the tournament. He noted that this has brought back the lost glory among traders in the market.
“I am very happy because when the organisers made mentioned of the tournament a lot of people thought the competition will not hold but by the grace of God, here we are today.
To me the competition was basically to bring peace and harmony, also to catch fun, happiness has returned among us.
Almost everybody in the market was discussing about the competition every morning in the market for me, kudos to the new exco,” Akere said.

Officials of the Federal Ministry of Youth and Sports Development have been accused of failing to distribute $100,000 (N41.1million) allowances donated by three banks to Nigeria’s women basketball team for their Tokyo 2020 Olympic participation.
Speaking with newsmen, a member of the senior women basketball team, D’Tigress, revealed that their allowances, bonuses, training grant worth $4,900 had also not been paid.
She added that none of the D’Tigress team members would show up in camp in preparation for the February 2022 FIBA World Cup if the Nigerian government failed to pay them.
“The last time we checked, some of our allowances, bonuses and training grants have not been paid. All our accounts numbers have been submitted but still no remittance. Donations made by banks for players, officials, volunteer stipends etc. dating all the way back to 2018 but I will let the managers address the vendor/contractor’s situation, she said.
“They forget we all have a relationship and do communicate; $500 each 2018 FIBA World Cup for players and officials; $1,000 each for finishing final 8 in FIBA World Cup; $1,000 each bonus for winning AfroBasket in Senegal for 2019 players and officials.
“$300 – $400 each Mozambique Olympic Qualifier allowance balance, were supposed to be paid $100 per day; $2,000 eachtraining grant balance from Tokyo Olympics, players only. The $100,000 donated by three Nigerian banks to all the players and officials that made D’Tigress Olympics qualification possible final roster. The men also got $100,000 assigned to them, the total was $200,000.
“Miscellaneous expenses by players and officials; the full breakdown has been submitted to the outgoing Basket Ball President and the honourable minister, Sunday Dare.
“With all due respect to the association leadership, the Presidency, the Ministry and NBBF administration old and new, if these monies are not paid before the next qualifier of the next tournament in February 2022, FIBA World Cup, the entire D’Tigress team will not show up in camp. We are all saying this as one unit and one voice.”
watched the Olympics games and knows Nigerian Basketball could see that something was wrong. We didn’t play our best because we weren’t treated or given the best during one of the greatest stages and moments of an Athletes career.
“Yes, we had some injuries, could have executed better but there were a lot of distractions around us like; Not knowing who we have available on the team. Not having enough practice time with each other to build cohesiveness.
“Our head coach did not prioritize adequate preparation nor trust his staff enough to delegate significant responsibility. Poor decision by the outgoing President Musa Kida, he avoided the D’Tigress in camp because we inquired about our money amongst other basic things, when he made it to the U.S, he bypassed us in Atlanta to Vegas to support the men’s team. He did not support us with any leadership personnel.
“I believe each player that has been a part of D’Tigress since 2017 has their own thoughts and feelings about the dissolved NBBF Board and coaching staff over the course of the time. It is evident that our voices haven’t been heard, our request for little things ignored, we are not being celebrated and recognized as this team deserves, instead allowances and bonuses are being owed by the NBBF and Ministry.
“Once again, not having a General Manager (GM) on the team created unwanted disorder. This was the icing on the cake for all players with the emotional buildup over the years. We knew all we could do is stick together, try to stay positive and enjoy the Olympics the best that we could. As a team, we know if we were well prepared to play in the Olympics, there would be no doubt we could have advanced out of our bracket. To our loyal Fans that has been by our side, we appreciate you all.”

The striker of the Railway FC of Port Harcourt, Emmanuel Woko, has said that his target is to win the highest goal scorer and the most valuable player award at  the ongoing Rumumoji Unity Traders Football competition.
He stated that, as a striker his job is to score goals, adding that knowing the importance of the competition, he wants to write his name with a gold pen by winning the highest goals scorer award.
Woko said this, on Monday in an exclusive interview with Tidesports just after he scored his first goal of the tournament against Provision Store FC.
He expressed happiness for opening the net in the 3-1 victory against Provision Store FC,  adding that they prepared very well for the tournament.
“We have worked very hard for this game and I am sure we are  going to be victorious at the end of the competition.
No tournament is easy but it depends on your preparation, I think we prepared well coming to this competition.
I feel so happy for scoring my first goal in this competition.
My target is to become the highest goal scorer and the most valuable player of the tournament.
I say thank you, for the organiser of the competition because it is a way of giving the youths opportunity to showcase their talent,” Woko said.