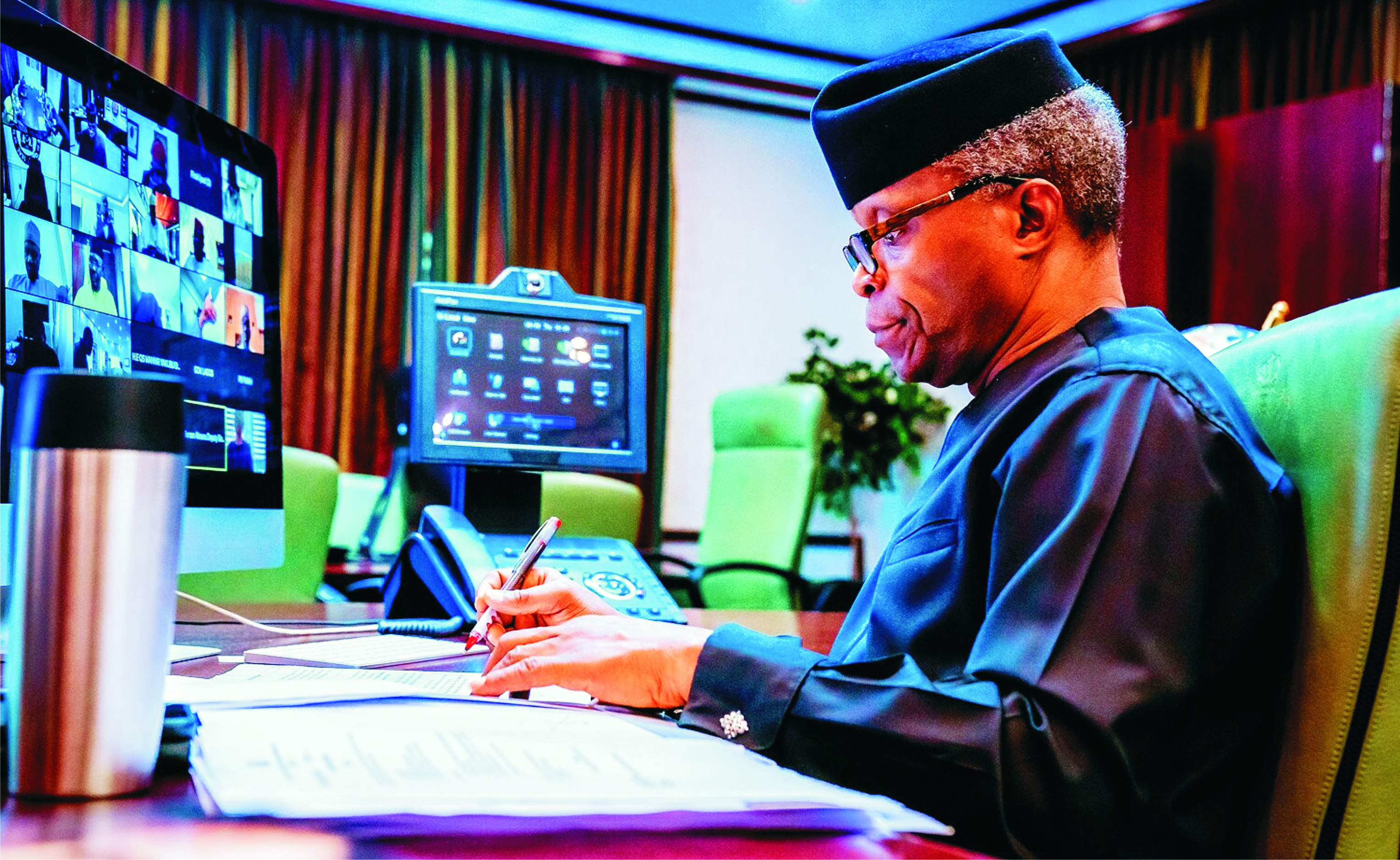 The Vice President, Prof Yemi Osinbajo, yesterday, said that it would be callous and irresponsible if those elected into office do not come together to sort out the grave life-threatening problems confronting Nigerians on daily basis.
The Vice President said the country has millions of extremely poor people and that the Coronavirus (Covid-19) pandemic has worsened employment and poverty.
This is as the two-day Executive/Legislative retreat presided over by President Muhammadu Buhari has recommended that the ruling All Progressives Congress (APC), should exercise more control on its members to enable it to resolve crises that may arise.
Osinbajo, in his remarks to close the retreat at the State House Conference Centre, Presidential Villa, Abuja, said: “We have no choice if we are not to fail the Nigerian people who have given us this incredible opportunity amongst millions of our compatriots to serve at this high leadership levels we occupy today.”
He further said, “Let me say that every generation of leadership must understand the context. Law itself must be interpreted and implemented in context.
“What is the reality of the context that we operate in today? We all know our nation has millions of extremely poor people; the Covid-19 pandemic has worsened employment and poverty. We have huge deficits in infrastructure; many children are out of school. If that is our context we will be callous and irresponsible if we don’t come together, work together to sort out these grave life-threatening problems our people have to confront every day.
“So, it is time to focus on what we have been elected or appointed to do. This is the welfare of our people. The law and practice as between parliament and executive is a means to an end not an end to itself. The means must not jeopardize the end.
“Our people just want food on their table, shelter over their heads, clothing on their bodies, healthcare and education for their children and themselves.
“So, the good legislature or good minister is not the one who is waving the law, and procedure, and doctrines, it is the one who says the spirit of our Constitution is that we secure the maximum welfare, freedom and happiness of every citizen on the basis of social justice and equality of status and opportunity.
“The good legislator and minister is the one who will do all in his or her power to serve the needs of our people, even if it means walking the fine lines, as Hon Wudil said between the law and reality.”
In a 10-point recommendation read by Minister of the Federal Capital Territory (FCT), Mohammed Bello, at the end of the retreat, it was resolved that there should be respect for party leadership by its membership.
According to the recommendation, “The ruling political party should be encouraged to take ownership of its members to be able to reconcile them whenever conflict arises, and, members in both arms of government should show regard for the party and its leadership.”
It called for a concrete understanding and working knowledge between both the Executive and Legislature just as it noted that an effective confidence-building measure should be put in place in the governance process to ensure mutual respect and cordial relationship between the Executive and Legislature.
The parley further recommended the creation of effective conflict management and resolution mechanism in resolving areas of disagreement between the Executive and Legislature in the overall national interest.
Other recommendations are that there should be modalities for better access, interfacing and engagement between the leaderships of both arms of government, the National Assembly Committees and Ministries, Department and Agencies (MDAs) should be worked out by the Secretary to the Government of the Federation (SGF) and National Assembly -Executive Liaison.
It was also recommended that “There should be regular pre-budget consultations between the Executive and Legislature particularly between the MDAs and NASS Committees, Ministry of Finance, Budget and National Planning and the appropriate Committee in NASS.
The summation from the retreat highlighted what it referred to as weak mechanism for conflict management and dispute resolution between both arms of government and limited consultation between them on critical governance issues such as policy initiation, programme implementation, planning, and legislative processes.
Other issues that arose from the parley include lack of clarity in communication and poor feedback mechanism leading to different and subjective interpretation of intent and purpose of the message.

Ondo: Election Should Not Be Do Or Die Contest, Sultan Counsels