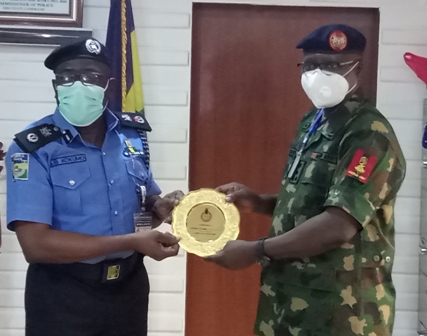 The Director-General, National Youth Service Corps, (NYSC), Brigadier General Shuaibu Ibrahim,  has tasked corps members participating in the Edo State governorship election to display a high sense of neutrality in order to protect the integrity of the scheme and that of their parents who have laboured to send them to school.
He gave the charge while addressing the corps members ahead of the election in the state.
Ibrahim said the scheme had contributed to the electoral process in the country and that the history of the nation cannot be complete without references to it.
“I am in Edo State for a specific reason; one, for the election and I believe that as your father, it is very appropriate to come and talk to you. I also want to use this opportunity to see the Oba of Benin, the security agencies in the state for your security and welfare.
“The Area Director, South-South has spoken to you comprehensively and as a father, mine is just an emphasis.
“NYSC has contributed to the electoral processes of this country. When the history of election is written in Nigeria, NYSC will also be mentioned because, the INEC chairman, in every forum tells Nigerians that without Corps members, they can’t organise such an exercise because Corps members are knowledgeable, they are patriotic.
“So, I want to advise, as Corps members, you are on national assignment, you are serving your country, remember our motto? So, as Corps members participating in this election, you are supposed to be apolitical.
“Do you know what it means to be apolitical and you have to be neutral. You belong to nobody and that is all. I am happy, almost 80 per cent of you are not from this state if not 90 per cent.
“You must be neutral. You must not give yourself to be used by anybody because first, you are representing your name, that of your family and NYSC”, he said.
The NYSC boss said that the corps members should not allow themselves to be enticed by politicians so as to compromise their stand in ensuring the credibility of the election, noting that there is always dignity in poverty.
“Even in poverty, there is dignity. So, don’t be tempted to rubbish your integrity. Be very proud of the name you are bearing, be very proud of the country you are serving and the good people of Edo State that you are assisting here”, he said.
“Do not do anything to tarnish your name. Please, let nobody lure you to compromise your integrity”, he added.
He also encouraged them to take the issues of their security seriously just as he assured them of their safety and security.

CAN To Hold Fasting, Prayer For Peaceful Edo Poll

Nigeria, Others Move To Reopen Borders