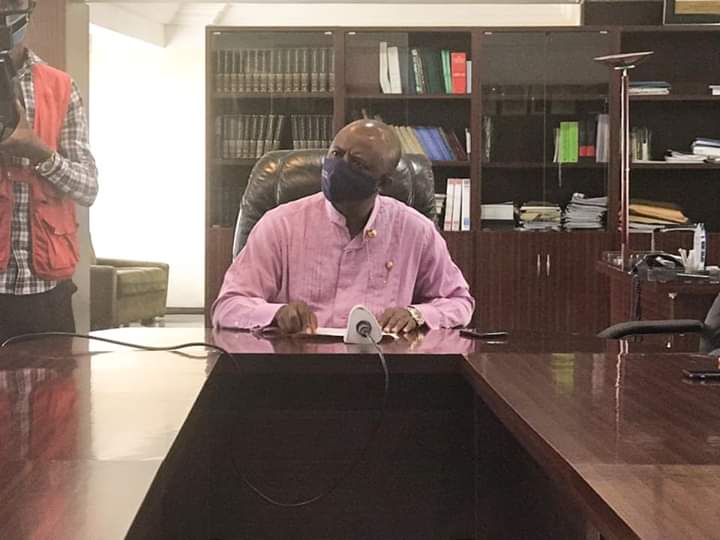 As scientist globally research to provide vaccine for the dreaded SARS-Cov-2 disease also known as COVID-19 presently ravaging the world, the Secretary to Rivers State Government, Dr Tammy Danagogo,  has said that the  Rivers State Governor, Barr. Nyesom Wike is proactive,  pragmatic and determined in the protection of lives against the disease.
The Secretary to the State Government who is also the Chairman of Rivers State Food Palliatives Procurement Committee, said on Friday that  the present COVID 19 crisis being experienced in Nigeria would have been averted or drastically minimized if the nation’s leaders had taken proactive and pragmatic steps with zeal and passion like Governor Nyesom Wike of Rivers State to ensure borders were timeously and properly checked and closed based on  spreed of the Coronavirus cases globally and World Health Organization declaration of it being a pandemic without cure.
While receiving palliatives from members of the Petroleum Contractors Trade Section, under the Lagos Chambers of Commerce and Industry, Dr Danagogo said, Governor Wike saw on time that, Rivers State being the
capital of the hydrocarbon industry of the nation was at risk of being vastly exposed to the novel virus.
“The Governor saw that what was  happening in Lagos will happen in Rivers. We have three functional airports  – the International Airport, Airforce Base and Bonny Airport which means people are coming in from all parts of the world,” he said.
He regretted that, the Governor’s proactive  efforts to nip the disease at the bud  were misunderstood, criticised and resisted by people from different quarters both within the state  and at the federal level.
He urged the masses to stay cautious and abide by the rules of physical distancing and always wear  facemarks.
He thanked members of the Petroleum Contractors Trade Section for the support as it was a time for all to show love and brotherly kindness especially in the provision of medical equipment that are now  scarce.
“Any effort at supporting the Government is very much appreciated and particularly heart warming when we hear organisations  are supporting communities they operate in. This is a time the masses are in need and
provisions for host communities in times like this, no doubt yields good relationship. He added that names of companies and individuals who have supported and partnered with the Government would be published later.
Earlier, representative of the Petroleum Contractors Trade Section, Mr Adonijah
Owiriwa said the support was initiated in consideration of the fact that most businesses by the association were carried out in Rivers State.