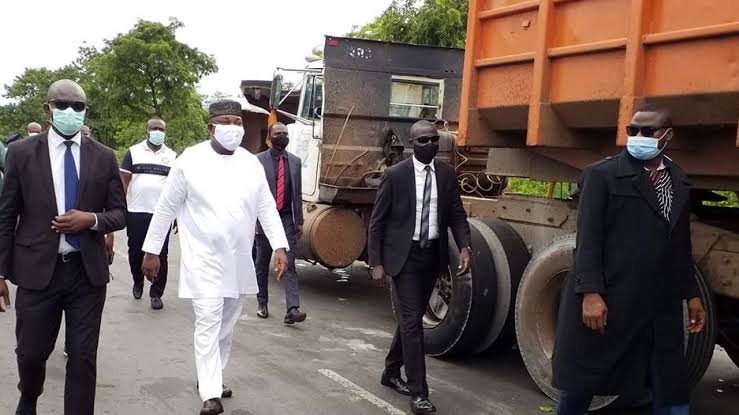 Governor Ifeanyi Ugwuanyi of Enugu State has expressed deep concern that all the eleven confirmed positive cases of Coronavirus (COVID-19) are people who entered the state illegally despite the Presidential order on restriction of inter-state movement and the state government’s closure of all boundaries and inter-state transportation.

Gov. Ugwuanyi who made this known while addressing residents of Enugu State on confirmed cases of coronavirus in the state further disclosed that the 11thconfirmed positive case, announced by the Nigeria Centre for Disease Control (NCDC) on May 12, 2020, was a 40-year old male who had been in Kano since April 2020 and came back to Enugu on May 4, 2020.

The governor declared that “it has become imperative that we all take responsibility to protect our dear state from the illegal influx of people into the state”.

He therefore asked all those charged with the responsibility of protecting all land boundaries in the state “to put more efforts to ensure that our boundaries are properly secured to curb this unfortunate importation of the COVID-19 into the state”.

Governor Ugwuanyi therefore urged the people of the state to continue to abide by the protocol of the NCDC, including the mandatory use of face masks/ covering in public, maintaining social/physical distancing and high level of personal and respiratory hygiene.

He reassured the people that his administration will continue to do all within its powers to effectively contain the spread of the pandemic in the state.

According to him , “on the 28thof March 2020, Enugu State had its index positive case, a couple from Isi-Uzo Local Government Area who then just returned from the United Kingdom and Dubai. Both have been successfully treated and discharged.

“One month after the index positive cases was confirmed, on the 28th of April 2020, Enugu State had its 3rdconfirmed positive case, a female indigene of Bauchi State with a history of travel to Bauchi and Plateau states.

“On the 1st of May, 2020, Enugu State had its 4th confirmed positive case, a female indigene of Umuchigbo in Enugu East Local Government Area who together with her nine-year old daughter returned to Enugu from Lagos State where they reside after falling ill.

“On the 6th of May 2020, Enugu State had its 9th confirmed case. A female nine-year old daughter of the 4thconfirmed positive case, who returned to Enugu with her already ill mother.