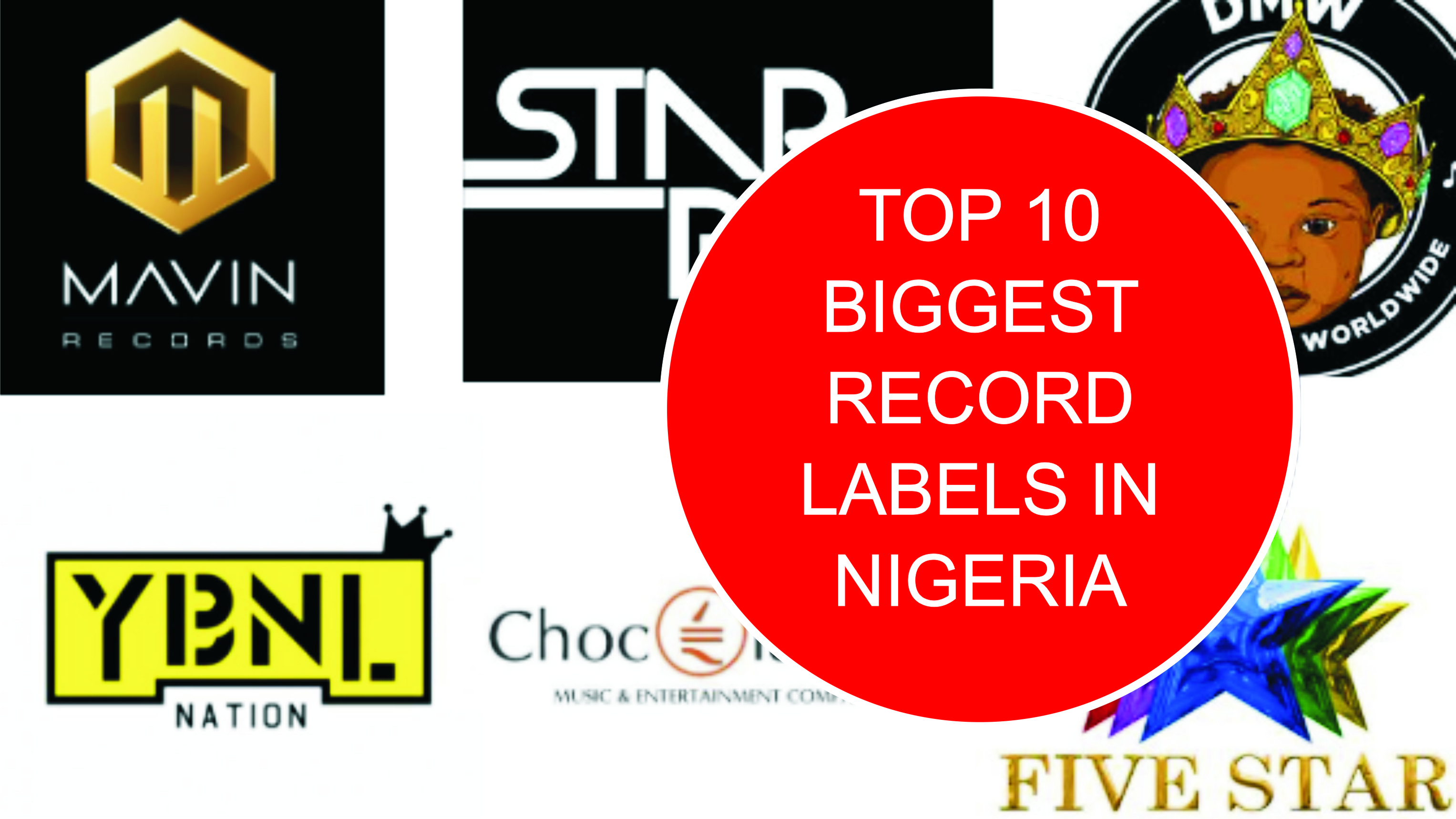 The dream of every upcoming artiste is to be signed to one of the biggest Record Labels as a stepping stone towards achieving stardom. In Nigeria there are various record labels ruling the music industry among which are the top 10 biggest and richest record labels in their descending order of prominence. They include the following:
10) Chocolate City Record Label: The Chocolate City Record label under the leadership of M. I. Abaga was founded in 2005. The record label has produced several acts like Jesse Jagz M.I. Ice Prince, Brymo etc. It is currently housing young talents like C. Key, Blagbonez, Dice Ailes and Young L.
9) DM Records: Timaya and his label executives have made an amazing impact following the signing of King Perrgy, gifting the young star the right management and funding he deserves to record a massive hit with Teni lifted ‘Murder’. Since then the label has been moving from strength to strength.
Timaya on the other hand served us the Chulo Vibes. EP. DM records with just two years in existence has done pretty good.
8) Pent Hauze: With over five awards, four studio albums and the 2019 endorsement with Tom Tom, Phyno has positively led Pent Hauze to glory. After signing Nuno, Rhatti and Cheque, Pent Hauze dropped 2019 singles, The ‘Big’ and ‘Agu’ with Phyno’s Third studio album ‘Deal With It’ as a solo act. Pent Hauze debuts as one of the biggest and richest record labels in Nigeria.
7) Star Boy Entertainment: Star Boy Fan Club (FC) won’t agree less that Wizkid Entertainment has dropped just three singles in 2019 ‘On Me’, ‘Same You’ and ‘Won Stop’ by Teni. The label has not had any single from Wizkid to further boost the brand. This year as Terri has once again failed to take up the mantle for star boy entertainment as he keeps living under Wizkid’s Shadows. Wizkid with a new endorsement deal with United Bank For Africa (UBA) bagged in some millions for the record label.
6) Effyzzie Music Group: Nigeria’s Effyzzie music group has proven to be a renowned music firm after releasing Yemi Alade’s ‘King Queens’ debut album in 2014 and Johnny The record label has since then led ‘Yemi Alade to her 4th Studio album ‘Woman of Steel’ in 2019 and two MTV Africa Awards in 2015 and 2016.
Effyzzie music group has recorded a massive success with Yemi Alade and thus becomes one of the biggest and richest- record labels.
5) Dr Dolor Entertainment: Teni is today a household name, courtesy of Dr. Dolor Entertainment. The record label led the talented singer and song writer, Teni to three awards in 2018 (including the headies) award and a 2019 BET awards nomination.
Teni as the lead act of the film joined the record label in 2017 and has since then bagged amazing endorsement deals with Pepsi Nigeria, Budweiser, Tom Tom and Tecno Mobile. Dr. Dolor is the fifth biggest and richest record labels in 2019.
4) YBNL: Olamide’s YBNL which birthed in 2012 is the 4th biggest and richest record label on Nigeria 2019. YBNL has been topping charts on every media and streaming platforms with 2019 singles ‘Oil and Gas’ from Olamide and Fireboy’s “Jealous” and “What 41 Say”.
With a new found talent, YBNL retains its lead as one of the greatest record labels in the country. Fireboy, who Was signed in October 2018, recently earned an AFRIMA nomination.
3)Spaceship Entertainment: Spaceship Entertainment birthed in 2015 by Africa’s most sensational act Burna Boy couldn’t have missed the list. Burna Boy and Spaceship Entertainment have gradually risen to the top from almost noting.
With 7 individual awards, including the most recent BET International award and his 3rd studio album under his own imprint. Spaceship entertainment, Burna Boy have successfully branded and sold his label to the world.
2) Mavin Record: Don Jazzy led Mavin Records resurrected in 2019 after losing Tiwa Savage, Reekado Banks to Universal Music and Bank Music earlier in 2019. The record label found their saviour in Rema, who hasn’t just restored the label’s glory but has gone already to break several records with the label with hit singles like ‘Dumebi’ and ‘Iron Man’. By Rema, it houses artists like Ladi, Poe, DNA, Cray on, Johnny Drille etc with a multi million naira investment deal from Pupanga Holdings, Mavin retains its spot as one of the biggest and richest record labels in the county.
1) DMW Entertainment: Davido music world wide (DMW) had displaced Mavin records in 2019, taking the crown as the biggest and richest record label in Nigeria. DMW boss Davido, discovered Mayorkan in 2016 and handed him his first ever concert ‘Mayor of Lagos’ within two years.
DMW gifts Dremo, his second EP following his success on his debut EP Code name VOI 1 barely 10 months after joining the reputable record label.
In 2019, DMW had dropped two hit singles as label, ‘BUM BUM’ and ‘Only God’ making her the only label with seven singles and Visaals Twisted, prayer, Aze, ‘mind’ and Azu without going further.

Brymo Claims To Be Better Than Wizkid, Burna Boy, Davido

Afrobeats songstress, Tiwa Savage has been unveiled as latest brand ambassador for a popular smartphone brand.
Before her official unveiling, the smartphone had teased its followers to guess who their latest ambassador by sharing a foggy image of the singer.
Officially welcoming her to their fold via its Instagram, as their ambassador for ‘Camon19Launch’, Tecnomobileng wrote: “Queen of Afrobeats! Mama Africa! Multitalented singer! Superstar extraordinaire and confirming the news in the comment section, the “Koroba” singer wrote: “The sexiest phone ever.”
Taking to her social media pages, Tiwa announced to her fans that she is the newest brand ambassador for smartphones.
Sharing an advert snippet of the brand, Tiwa wrote: “This one is highly approved by the No1ABG, Your girl is on board with one of the coolest brands ever – TECNO!

The Nigeria Police has ordered a Nigerian singer, Habeeb Okikiola, popularly known as Portable, to report himself over a viral video.
The Tide source reveals that Portable was seen in a viral video accusing a young man of sending a message to his ‘wife’, asking her to advise him to stay away from his friends for they had no glory.
In the video, the ZaZu Zeh crooner asked the young man to name his friends whom he was accusing of having no glory.
Without allowing his victim to say a word, the singer asked his boys to beat the helpless guy.
As they pounced on the victim, Portable was heard in the Yoruba language, saying “e luu pa”, that is, “beat him to death.”
Reacting, the Portable was asked to report to the Ogun State command as the incident happened somewhere within the state.
The Ogun State police spokesperson, Abimbola Oyeyemi, while describing the act as unbecoming and barbaric, asked the singer to surrender himself or be declared wanted.
“The attention of Ogun State Police Command has been drawn to a video clip circulating on social media, where a popular hip hop musician, Habeeb Okikiola (a.k.a Portable, the Zazu crooner), was seen organising some youths to beat up a young man and inflict bodily injury on him. The incident was said to have taken place somewhere within Ogun State about two days ago.
“Such unruly and violent behaviour is not only barbaric, but unbecoming of somebody who is supposed to be a role model for the youths and therefore should not be tolerated.
“In view of this, the Command is using this medium to advise Okikiola Habeeb, a.k.a Portable, to report himself at the nearest police station in Ogun State, failure of which his arrest will be ordered.
“The flagrant display of impunity by Portable in the viral video is condemnable and if not checked, it will send a wrong signal to the youths who are looking up to him as a role model.
“Jungle justice has no place in our laws and whoever embarked on it must be made to feel the weight of the law, no matter the status of such person,” Oyeyemi said. statement on Monday.

Nigeria’s Afrobeat superstar, David Adeleke alias Davido, who is currently on a North American tour labelled: “We rise by lifting others”, which began on June 16, at Brooklyn, New York, has made N144.5 million from the sold out ticket sales from History-Toronto, and House of Blue in Boston.
Figures released by SeatGeek showed that the award-winning singer’s tour tickets were generally sold for as little as $41.00, with an average price of $74.00. Davido made $185,000 (N76.8m) and $162,800 (N67.6m), totalling N144.5m based on an average ticket sales rate of N415.37 and the capacities of History (2,500) and House of Blues (2,200), according to BusinessDay.
Reports indicate ticket purchasers would go online to search for ticket prices using sites such as SeatGeek’s Deal Score Function which ranks tickets by value and shows buyers how good a deal they are getting when purchasing tickets.
While speaking with Trevor Noah, the daily show on the tour, Davido stated that his main aim of the North American tour was to showcase Africa in its entirety and to carry everyone along, especially Africans.
Award winning Nigerian singer, Davido Adeleke, has offered full scholarship to Suleyman, a young boy who got parallel A1 in WAEC exams.
Despite getting such an impressive result, Suleyman has been sitting at home due to lack of funds to sponsor his education at the tertiary level.
Fortunately for him, Davido heard about his condition and has promised to sponsor him through school and also take care of his allowance and accomodation. Davido tweeted: “We have contacted Suleyman who lives in Ghana and he has been given a full 4/5 year scholarship to Adeleke university.. accommodation and allowance included ! God bless y’all ..”