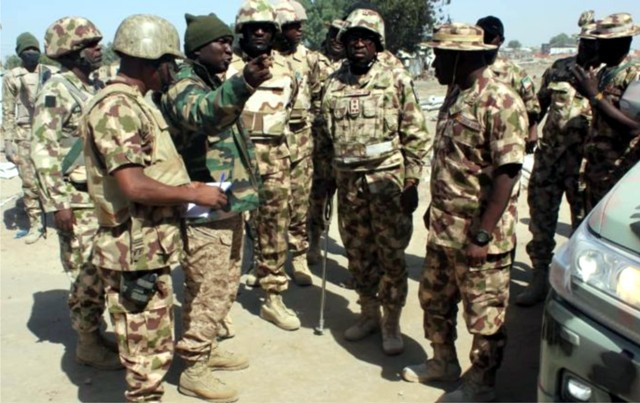 The Defence Headquarters says troops of Operation Hadarin Daji has neutralised over 10 bandits and rescued many kidnapped victims from their hideouts in Zamfara and Sokoto states.
The Coordinator, Defence Media Operations, Maj-Gen John Enenche, disclosed this in a statement, yesterday, in Abuja.
Enenche said that the troops, in a ground and air operation closed up on bandits in a subsidiary operation called Operation Chingaba along Maru-Dansadau axis killing nine bandits.
He added that 18 victims comprising 10 men, four women and four minors who were kidnapped by the bandits were rescued during the operation.
Enenche also disclosed that the troops, in a sting operation at Isah Road close to Sarwa Village in Isah Local Government Area of Sokoto State, arrested a gun runner known as Alhaji following credible information.
According to him, at the point of his arrest, his men in ambush opened fire on troops leading to his death while his men fled with various degrees of gunshot wounds.
“Troops recovered one General Purpose Machine Gun PKT, 140 rounds of 12.7mm, 43 blank ammunition, and one motorcycle.
“In the same vein on April 11, troops of FOB Dangulbi and Dansadau at a blocking force at Gobirawa made contact with bandits forcing them to withdraw in disarray.
“Troops pursued and neutralized one bandit, recovered one AK-47 rifle, three 7.62mm special ammunition, water jet explosives, two inches depth 33 cable for IED and one motorcycle.
“Furthermore, following sustained action on the bandits in Mutunj and Dansadau in Maru LGA on April 10, the Village Head of Mutumji handed over one AK-47 rifle captured from bandits to troops at FOB Dansadau.
“The Armed Forces of Nigeria hereby solicit for continuous provision of information for the enhancement of our operations.
“This is highly desirable in tackling our security challenges,” he said.
Similarly, the Defence Headquarters (DHQ) says that soldiers on a mop-up operation have killed scores of bandits and rescued seven abducted persons at Dogon Gona Forest in Niger State.
This was contained in a statement by the Coordinator, Defence Media Operations, Major General John Enenche, yesterday.
The statement reads, “Troops of 31 Artillery Brigade on April 11, 2020 on a mop-up operation to clear bandits at Dogon Gona Forest general area of Niger State rescued seven kidnapped victims.
“The victims, who were abandoned by the bandits after a fierce battle were said to have been kidnapped on March 27, 2020 and taken to an unknown destination.
“Following interrogation after a successful rescue operation, the village head of Madaki confirmed that the victims were natives of Roro village in Shiroro Local Government Area of Niger State. The victims would soon be handed over to the appropriate authorities for further necessary action.
“In a related development, troops of 31 Artillery Brigade on April 11, 2020 at Kontokoro village while on clearance operation engaged bandits in a gun duel. The operation led to the neutralization of several bandits and some escaped with gunshot wounds.
“The Armed Forces of Nigeria hereby continues to solicit for timely and credible information for the enhancement of its operations. This is highly desirable in tackling our security challenges,” the statement added.
However, one person was reportedly killed, yesterday morning while several others were injured and many houses burnt in a renewed clash between two families of Mbapen clan in Taraku town, Gwer East Local Government Area in Benue State.
It was also gathered that one person has not yet been found after the deadly clash which allegedly claimed the life of the deceased, Tseaa Wanpera, said to be a director in the employ of the state government in the Arts and Culture Ministry.
It was learnt that the age-long crisis started as a result of land dispute between two household (Aku and Mon) all of which are great grandchildren of Mbaakemcha, in Mbapen Clan.
Our correspondent reports that Mbaakemcha is one of the Tiv communities housing Taraku, a bustling rural town of about 15-minutes drive to Otukpo, headquarters of Idoma Kingdom.
An eyewitness said that the unsettled dispute escalated overtime and to such extent that the brothers were usually on war path, a development which had prompted the police to regularly surveillance the vicinity.
The witness added that fresh trouble began to brew at the weekend when one of the warring factions allegedly hired some mercenaries to unleash terror on the family of the deceased who had travelled home from his Makurdi base to attend his elder brother’s burial ceremony.
The local further explained that the attackers seized the funeral opportunity to open gun fire on allegedly few mourners left at home after the burial of their family’s patriarch in the early hours of yesterday, setting Wanpera ablaze in his house during the process.
“His (Wanpera) in-law was shot while one Mr Iorahom is still missing. Many houses were also set ablaze in the affected area and still in flames as we speak,” the local added.

We’re In Talks With RSG To Release Caverton Pilots -FG