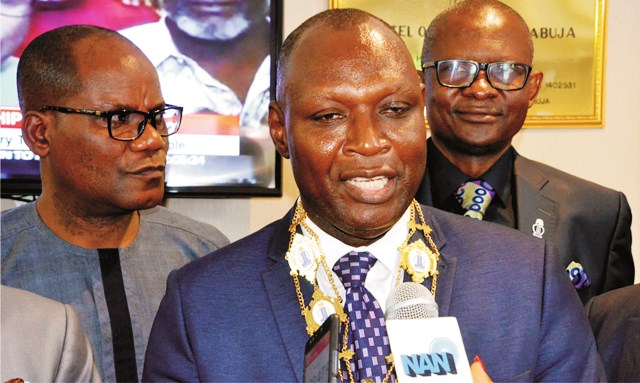 Benue State Commissioner for Education, Prof. Dennis Ityavyar, has hinted that the state government would soon probe the financial activities of the state’s Teaching Service Board (TSB), under the leadership of Dr Wilfred Uji.
Our source reports that Uji, who was appointed TSB Executive Secretary by Governor Samuel Ortom in 2016, resigned on Friday, April 3.
Uji, in his resignation letter, said that he was opting out so as to return to the Federal University of Lafia, where he was an Associate Professor of History.
“I want to return to the university to pursue the attainment of full Professorial status,” he stated.
He accused the Ministry of Education of “meddling in the affairs of the board, especially regarding teachers promotion and discipline”.
The former TSB boss, who later posted his resignation on social media platforms, blamed the political class for “creating unnecessary rivalry in the state for political advantage”.
He also blamed the state bureaucracy for excluding some appointees from direct dealings with the governor.
Ityavyar, while reacting, told Journalists at the weekend in Makurdi that Uji was forced to resign, contrary to his claims of voluntary resignation.
Ityavyar said that the Ministry of Education and the Office of the Secretary to the Benue State Government were inundated with complaints of alleged financial impropriety against the former TSB boss.
“Uji was asked by Gov Ortom to tender his resignation letter on 1st April, but instead of doing so, he was busy appealing to stakeholders and traditional rulers to intervene on his behalf.
“The ministry had, on five occasions, through writing, stopped Uji from collecting illegal deductions from salaries of school principals and teachers, but he refused to stop,” he alleged.
The commissioner, who described Uji’s conduct as “deficient in all forms of integrity”, claimed that Uji was “unfit to head a public office”.
He alleged that the former TSB boss had, on several occasions, ordered school Principals to kneel down before him while apologising for acts of misdeeds.
“The former Executive Secretary of the TSB was actually asked to resign on Monday, April 1, 2020, when it became obvious that he could no longer competently manage the high office he occupied.
“He was also insubordinate to the government that appointed him and did not respect the ministry supervising the board.
“Rather than mend his ways, Uji went round lobbying prominent individuals and traditional rulers to have them intervene and stop his sack,” he said.
He also accused Uji of failing to remit some mandatory revenue collections to the Ministry.
“Uji’s inability to interpret his role at TSB led to his underperformance, gross misconduct and eventual forced resignation.
“Throughout his nearly four years as the helmsman at the TSB, Uji never followed laid down civil service rules nor recognised the need to work in harmony with his supervising Ministry.
“Rather, he derived pleasure in circumventing due process and cutting corners, acts that were inimical to the smooth operation of the agency he headed.
“For instance, there are several cases of allegations of illegal deductions of salaries of principals of schools during his tenure.
“He exhibited more acts of gross ignorance and insubordination when he chose to query the role of the Ministry of Education over agencies and departments under it, while flagrantly flouting the same.
“But, because he never understood his role, he chose to dump his inefficiency on the Governor, claiming that he had no time with the Governor to brief him. This is another tissue of lies which has no basis whatsoever.
“Under his leadership at the TSB, the transfer of teachers was for sale. Any official who wanted to be transferred was made to pay for his or her transfer” he alleged.
But Uji, while reacting to the allegations, described the commissioner’s claims as “totally false”.
“Everything he said is a lie. It is total falsehood. The deductions, for instance, didn’t start with me. That has been the situation in the past 30 years,” he said.