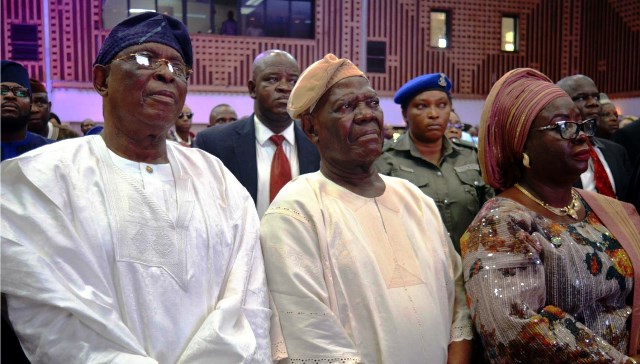 Loyalists of a former governor of Ogun State, Chief Olusegun Osoba, have urged the All Progressives Congress to heavily sanction the Commissioner for Youth and Sports, Dr Kehinde Oluwadare, for abusing the former governor.
The loyalists, led by the Financial Secretary of the APC and a  member of the Governor’s Advisory Council, Sunday Sowunmi, said the call was made to serve as a deterrent to others.
The embattled commissioner had been quoted to have described Osoba as a failed leader that could not match a former Governor of Lagos State, Bola Tinubu in terms of grooming leaders.
Apparently dissociating himself and government from the comment by his commissioner, Governor Dapo Abiodun suspended Oluwadare indefinitely.
Though Osoba’s loyalists in Abeokuta South applauded the governor for the action, they insisted that the party must do something to sanction embattled commissioner to avoid further abuse of the party leader in the state.
Sowunmi said Abiodun would not have become the governor without Osoba’s efforts before and during the election.
He said: “Despite the fact that the ‘baba’ is a veteran journalist, he will not talk. But if we fold our hands and allow the commissioner to get away with such statements, that will be highly ridiculous.
“The fact is that he (Osoba) is a national leader and the architect of this government. So, I don’t know why somebody in the government of Governor Abiodun will deem it fit to say such a thing about Chief Osoba. It is like biting the finger that fed it.”
According to Sowunmi, what the commissioner said might be the reflection of what some people in the government might have been saying in their private discussions.
He noted that that made him bold enough to say it out to the public.
He added, “I give kudos to Governor Dapo Abiodun for his immediate reaction.
“He has done well. But we cannot just keep quiet. ‘Oro ti ologbon ba so, enu ashiwere ni ati ngbo’ (what a wiseman says is echoed by a foolish man).
”I will further appeal to the APC in Ogun State to add more to the punishment given to the man by the governor because if we don’t,  it won’t be good for the party.
“I don’t think anyone can dispute my statement, including the governor himself. Therefore, I will advise my people, including political colleagues, that it will be very unfortunate for us to stand up one day and begin to say such to our leaders, especially, Chief Osoba, who is an elder statesman.
”After the commissioner made such statements, we started receiving calls from every part of the country which is very embarrassing.”