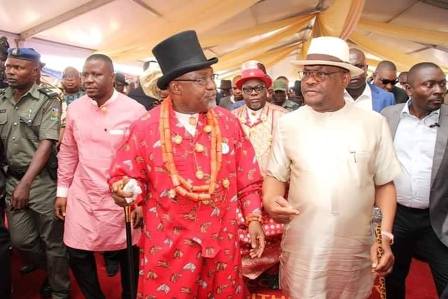 In a bid to further extend the ongoing sensitisation and awareness creation as a preventive measure to curb the spread of the novel Coronavirus in the state, the Rivers State Government has called on the traditional rulers to turn a new leaf by fostering attitudinal change and extend same to their domains.
Speaking to representatives of the traditional institutions drawn from all 23 local government areas of the state, last Friday, the state Commissioner for Information and Communications, Pastor Paulinus Nsirim, stated that expectations from the traditional rulers in the fight against the Coronavirus were high due to their prime positions in mobilising grassroots support for development.
Nsirim, who was speaking at a sensitisation and awareness creation meeting with the royal fathers at the Secretariat of the state Council of Traditional Rulers in Port Harcourt, noted that one area the royal fathers were expected to play critical role was in encouraging social distancing in the closely-knit culture of their people and ensuring that large number of people do not gather in their domains.
“We have a culture that handshake, embrace, and the likes, are part of us. Now that the virus is here, we’re advocating social distancing, just as we’re explaining here today. We also advocate that people should not gather in large numbers”, he emphasised.
He explained that the meeting was necessitated by the need for the traditional rulers to borrow a leaf from the proactive stance of the state Governor, Chief Nyesom Wike, who he said, commenced preparation for the prevention of the spread of the Coronavirus into the state weeks before the only index case was recorded.
“His Excellency did not wait for us to get an index case before resorting to proactive measures. Our committee was set up so many weeks before we had an index case in Rivers State. The Emergency Operations Centre was also set up; the Treatment Centre was also set up, and fully equipped. This shows that the government is very responsive.
“We began enlightenment: radio, TV, produced billboards, handbills, stickers, and ensured that … stakeholder groups in this state had an interaction with us. The whole essence is to make people living and doing business in Rivers State to understand that we need to imbibe new values as it relates to our health”, the commissioner stated.
In the same vein, Nsirim reiterated that the traditional rulers can take the message to their areas of jurisdiction and pass it on to their people.
“As a committee, we know that the traditional institution will be playing a very critical role in social mobilization and enlightenment of our people, and we desired to have this interaction, and share with you best practices and agreed protocol”, he said, noting that it will also be an opportunity for the government to also have feedback from the people.
“Knowing and acknowledging the importance of the traditional institution in ensuring the success of the fight against the Coronavirus, the governor has always included it in his speeches.
“If you’ve been following His Excellency’s broadcasts, he makes sure that the traditional institution is singled out to be a major player in passing down this message. Not just passing down the message, but also ensuring that in their various domains, nobody flouts the directives”, he said.
Nsirim noted that while the governor acknowledges the fact that some of the steps taken to check infection by the Coronavirus may have been seen as drastic, and made people to feel pain, it is for the overall good of the state.
“The measures that are being put in place are painful, but the point the governor has been making is that it’s a time for sacrifice. You, the traditional rulers, our royal fathers, will need to also pass this message down in your domains, that it’s a season for sacrifice.

Three Nigerians Die Of COVID-19 In US