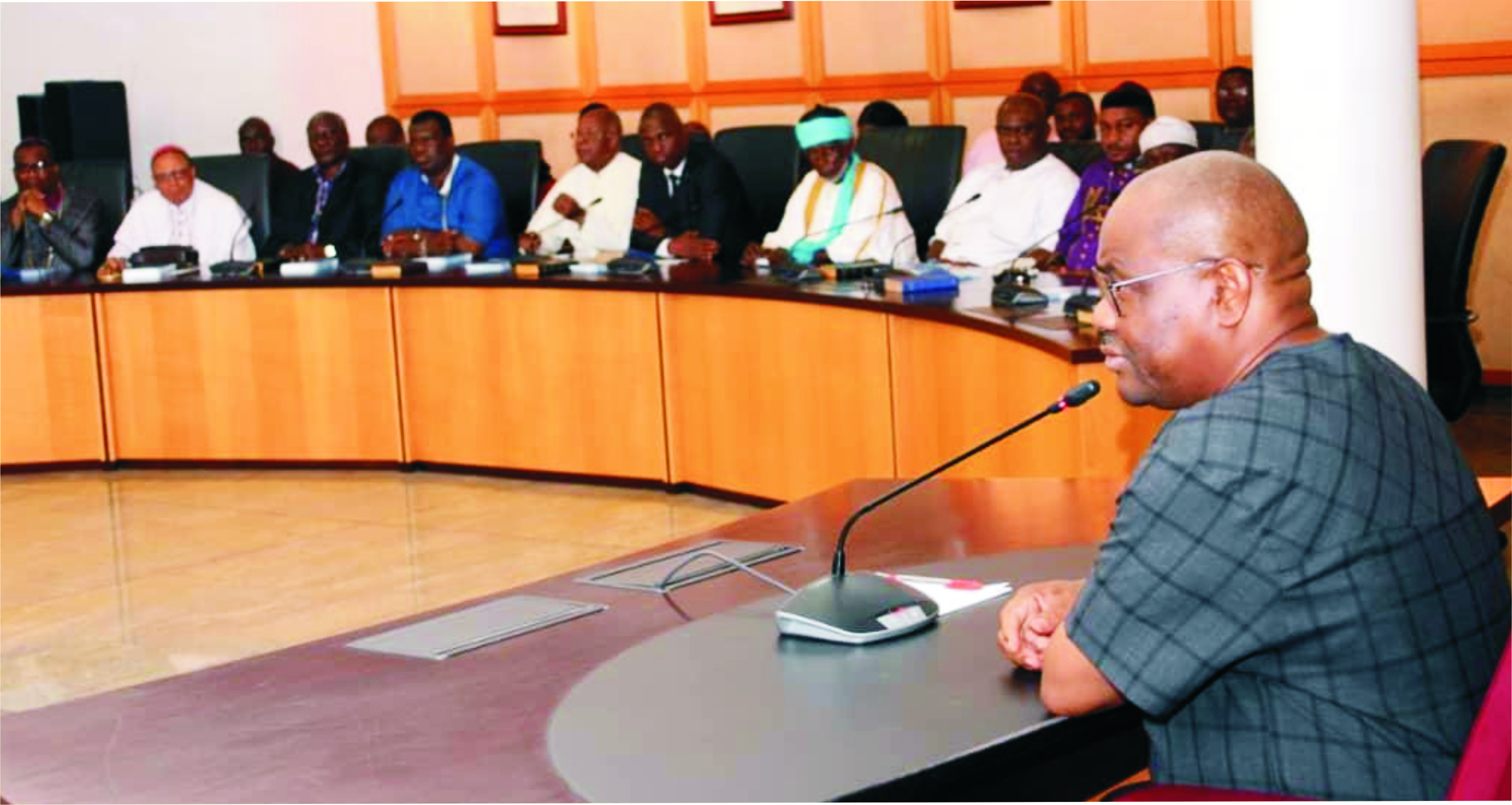 In furtherance of the commitment of the Rivers State Government to protect residents of the state, Governor Nyesom Wike, yesterday, announced that beginning, today, all public parks, night clubs and cinemas will remain closed till further notice.
In a state broadcast, yesterday, Wike directed religious groups to temporarily stop all forms of open worship.
He said: “with effect from the same date (Tuesday, March 24, 2020), all public parks, night clubs and cinemas in the State are to remain closed till further notice.
“Similarly, after due consultations with religious leaders, it was agreed that all religious organisations are to temporarily stop all forms of open worship. Public burial and wedding ceremonies are also banned within this period.
“In view of the fact that the disease spreads fast through body contact, social distance has become imperative if we are to contain the spread.
“May I, therefore, call on all religious leaders, traditional rulers and opinion leaders in the state to assist government to implement these decisions by ensuring that persons under their care do not fall foul of this directive”.
Wike directed Local Government Council chairmen to ensure that public burials and weddings do not take place in their respective areas.
He said: “May I emphasise that local government chairmen are to be held responsible if public burials and weddings take place in their local government areas.
“Government will set up monitoring teams for the 23 local government areas to ensure compliance. Defaulters will be seen as enemies of the state and will be made to face appropriate sanctions.
“My Dear Good People of Rivers State, the essence of governance is to protect lives and we cannot be indifferent when this COVID-19 continues to claim lives world-wide.
“We urge everyone to remain calm and maintain social distance. We shall continue to review the situation and adjust accordingly.
“Like I said in my broadcast last Friday, these decisions may seem painful for all of us but there is no price that is too much to pay for us to stay alive”.
The Rivers State governor stated with effect from Tuesday, March 24, 2020, surveillance posts will be set up across the state.
“The Rivers State Government having reviewed current developments across the country is desirous to further strengthen prevention measures across the state to keep our citizens safe.
“To this end, with effect from tomorrow, Tuesday, March 24, 2020, Surveillance posts are to be set up at the following borders of the state: Emohua for motorists coming from Bayelsa and Delta states; Omerelu for motorists coming from Owerri; Okehi for motorists coming from Imo State through Etche; Akwuzie in Ogba/Egbema/Ndoni Local Government Area for motorists coming from Imo State; Oyigbo Toll Gate for motorists coming from Aba and Opoku in Khana Local Government Area for motorists coming from Akwa Ibom State.
“Marine entry points: Port Harcourt and Onne Ports, Nembe, Bille, Bonny and NLNG Jetties are also going to be under surveillance. Each of the Surveillance Posts shall be manned by trained health and security personnel who will ensure that motorists and seafarers are tested before they are allowed to enter the state.
“All motorists and seafarers are please enjoined to cooperate with the Surveillance teams as they have been empowered to legitimately enforce this directive,” Wike said.
The governor added: “I use this medium to call on citizens to minimise family visits. Rather, everyone should maintain contacts through the use of telephones”.
Meanwhile, the Rivers State Governor, Chief Nyesom Wike has appealed to religious leaders in the state to cooperate with his administration to enforce precautionary measures to stop the spread of Coronavirus.
Speaking during a meeting with religious leaders at the Government House, Port Harcourt, yesterday, Wike urged the religious leaders to work with the state government to fight the ailment.
He said “This is a trying period. The state government owes the society a responsibility to protect lives and property.
“This is an interface to inform you of the measures that the state government is taking.”
He urged the churches and Muslims to ensure social distancing of about 50 persons who worship at a particular time.
The governor advised all religious groups to spread out their worship time to admit fewer people per time.
Wike informed the religious leaders that his administration has set up surveillance teams to test all people coming into the state.
He said, “Health issue is vey. Nobody should trivialize health issues.”
The governor said that only government directive will apply in the state at this time.
He said that markets are yet to be shut down due to the current economic situation.
Responding, Anglican Bishop of Evo Diocese, Rt. Rev. Innocent Ordu said that clerics have been directed to restrict attendance of church services to check the spread of Coronavirus.
The Regional pastor of Redeemed Christian Church of God, Pastor Belemina Obunge said that the church has already taken measures to restrict the numbers of worshippers in the churches.
A Catholic Priest, Mognr Pius Kii informed the governor that the church is already working to stop huge numbers in any church service.
Apostle Zilly Aggrey, said steps should be taken on the issue of lock down of cities.
Also speaking, Imam Idris of Rumuolumeni Mosque assured the Rivers State governor that Muslims in the state will comply with the directive of the state government.