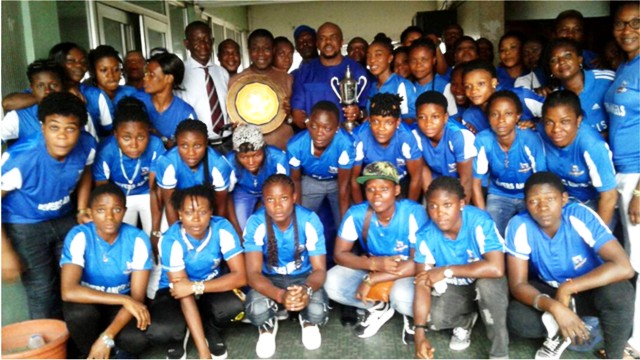 Team manager, Rivers Angels FC,  Matilda Otuene Onyiloha, has expressed gratitude to stakeholders of sports  in Rivers State for their support towards her, during her contest as Chairman in the Nigeria Women Football League (NWFL) Club Owners Association election held in Enugu.
She made the statement Friday, shortly after the elections held at the Hotel Cordial Ltd, 151 Chime Avenue New Haven, Enugu.
According to her, the feat was not an easy one as she promised to be a good representative of the various clubs.
“I wish to express my gratitude to everyone for their support and prayers since yesterday, following my victory as Chairman in the NWFL Club Owners Association election held in Enugu,”
“Special thanks to the Executive Governor of Rivers State, Barrister Nyesom Ezenwo Wike (CON, GSSRS, POS Africa), the Rivers State Ministry of Sports, Chairman of my state FA, Barrister Christopher Green, my team, Rivers Angels and the entire women football supporters,” Matilda Otuene  Onyiloha  said.
Meanwhile, Emmanuel Osahon (FC Robo Queens) emerged as vice chairman and Hajia Hussenia  (Nasara Amazon’s FC) as secretary.
While, Roland Gbaruko (Abia Angels FC) now occupies the treasurer’s position.