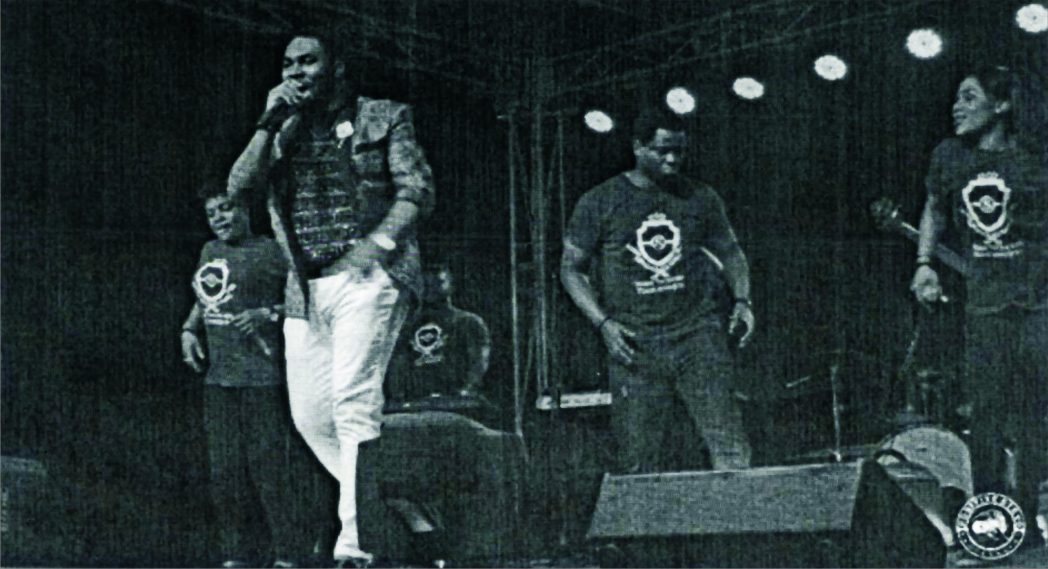 A Port Harcourt based Gospel group, Grace Gospel Outreach, a non-denominational group recently organised a gospel music jamboree titled: “Love Praise Concert 2020” and the unveiling of the group’s maiden edition of Gospel Female Soccer Tournament to mark their 7th edition of the gospel music festival.
The week long activities which started on February 9th,2020 at the St.Andrew’s School Field, Mile One Diobu Port Harcourt attracted a crowd of youths and Christian faithfuls across the state who were thrilled by gospel artistes with seasoned gospel preachers in attendance
Among the guest artistes who held the large crowd spell bound with their amazing performances were Sammy Wonders, Yada,Doris Francis, WhatLad,Annie Winsome and crew as well as the host,Next Grace Gospel band that showcased captivating songs and fantastic dance steps
The love concert which coincided with this year’s St.Valentine’s love week also featured ace comedian, K.O.Baba. who charged up the atmosphere with laughter and fun .He succeeded in cracking some ribs with his funny jokes as well as other side attractions that added spice to the event.
The organizers of the event also paraded some of the best gospel preachers in the state who dished out soul searching sermons and prayers, led by Pastor (Dr)Helpmeet Ene Secondus(wife of the national chairman of the People’s Democratic Party) Uche Second. Others were Rev (Mrs) Christie Nature, Rev.Loveday Akah of the Assemblies of God Church Port Harcourt, Pastor Wisdom K and Pastor Josiah Orisah among others.
One of the significant points of the love concert was the conversion of over 200 youths who gave their lives to Christ after a powerful alter call by Pastor Josiah Orisah.
The climax of the week long gospel fiesta was the unveiling of the maiden edition Of the group’s gospel female soccer tournament that debuted Six teams namely: King’s Jewels FC,Golden Sun FC,and the Royal Qeens FC.Others included Golden Angels FC,Future Angels FC and Osklean Football Academy Port Harcourt.
At final stage of the keenly contested tournament held on Sunday February 16th 2020 at St Andrew’s School Field Port Harcourt, Royal Queens FC defeated Golden Angels FC 4-3 by penalty after a goalless draw at full time of the game. The winners went home with the highly coveted golden soccer trophy, the Golden Angels FC won the silver cup, while the Golden Sun FC of Bayelsa State clinched the bronze cup.
Awards were also given to other categories of winners. The award for Best Player/Highest Goal Scorer of the tournament was presented to Miss Sabina Iwow of the Golden Sun FC of Bayelsa State, Miss.Glory Woke of King’s Jewels FC of the Assemblies Of God Church port Harcourt. The team also won the award for Best Behaved team.
Speaking with The Tide shortly after the event ,the convener of the event and founder of the Next Grace Gospel outreach, pastor Akpan Aniekpeno Okon said:”The purpose of the annual love praise concert and gospel female tournament is to bring Christian faithfuls, especially the youths together in a Godly platform every st.Valentine’s season when all manner of canal and worldly activities have been initiated by the devil to sway the youths away from the kingdom of God”.
He noted that the program was to frustrate the devil by redirecting the mindset of Christians towards God through preaching the gospel, songs and praise as well as provide a platform for the budding artists to showcase their talents and encourage women participation in football.
Pastor Akpan who is also the immediate past chief whip of the Actors Guild of Nigeria (AGN), Rivers State chapter and a member of the Association of Movie Producers (AMP) in the state, disclosed that since the inception of the gospel love concert in 2014, the group had successfully hosted six editions, but the 2020 edition remains the best so far due to the unprecedented turnout of youths, most of who gave their lives to Christ at the event.
The United Nations Excellent Young Ambassador of Peace awardee also disclosed that the 7th edition of the event was unique as it marked the unveiling of the group’s female soccer championship. He attributed the success to God’s divine intervention and grace, and the dedication of the organisers such as the outgoing chairman of AGN in the state, Mr.Batholomew Gerald Aguogo, Lizzy Charles, his wife Ibiye and children whose support, financial and moral contributions led to the success of the event.
Also speaking. The event manager, Mr.Long john Kingsley Ogunka said: the enviable success recorded at the event was not achieved on a platter of gold as they had to surmount daunting challenges bordering on finance and logistics
Mr.Long John who is also the Public Relations Officer of the group called for partnership with government and Christian organizations to move Next Grace Gospel outreach to the next level of growth. He noted that with the experiences they have acquired from previous editions, the 8th edition in 2021,would record greater milestones and new innovations.