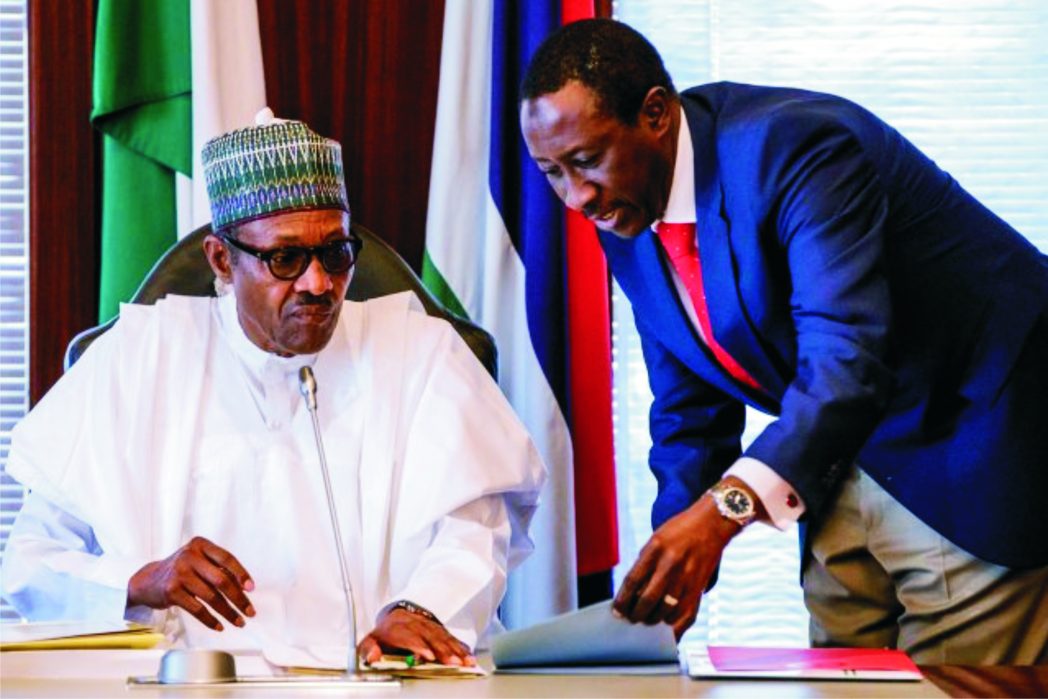 The National Security Adviser, Babagana Monguno, has accused President Muhammadu Buhari’s Chief of Staff, Abba Kyari, of undue and dangerous interference on national security matters.
Consequently, Monguno has fired a warning memo to all service chiefs to desist from taking further directives from Kyari, according to documents made available to newsmen, yesterday.
Monguno said Kyari’s directives to service chiefs were sometimes issued without the knowledge much less approval of the president, a practice he said has added to government’s failure to contain insecurity.
“Chief of staff to the president is not a presiding head of security, neither is he sworn to an oath of defending the country,” Monguno, a retired major-general, said in the December 9, 2019, letter.
“As such, unprofessional practices such as presiding over meetings with service chiefs and heads of security organisations as well as ambassadors and high commissioners to the exclusion of the NSA and/or supervising ministers are a violation of the Constitution and directly undermine the authority of Mr President.
“Such acts and continues meddlesomeness by chief of staff have not only ruptured our security and defence efforts but have slowed down any meaningful gain that Mr President has sought to achieve.”
Monguno’s letter comes as insecurity returns to centre stage as a major cause for worry among Nigerians.
Violent attacks linked to bandits, kidnappers, armed robbers and vandals have continued to claim multiple lives and properties across the country.
The president has repeatedly promised to curb the crises, many of which he met in office, but has largely failed like his predecessors.
Security experts, opposition and federal lawmakers have responded by advising the president to fire his service chiefs.
The service chiefs have been unable to rein in Boko Haram insurgents since 2015 when Buhari named them to take charge of various arms of the nation’s security architecture.
While previously held swathes of land have been taken back from terrorists, deadly attacks on civilians and military targets have worsened since 2018.
The Chief of Army Staff, Lt-Gen Tukur Buratai, said in recent media interviews that the military has degraded insurgents’ capacity to attack Abuja and other cities outside the war-ravaged northeast.
National security sources said, yesterday, that the fresh memo showed how Kyari has helped in keeping the service chiefs in office despite overwhelming call for their ouster.
It also underscored the frustration faced by Monguno and others who found Kyari’s influence over the president too domineering for national benefit, sources said.
Kyari and two presidential spokespersons, Femi Adesina and Garba Shehu did not return requests for comments about the memo, yesterday afternoon.
But reacting, the Peoples Democratic Party (PDP) said the revelation by the National Security Adviser (NSA), Maj-Gen Babagana Monguno (rtd), that strange persons have been presiding over critical affairs of governance has validated its position that President Muhammadu Buhari has abdicated the responsibilities of his office.
A statement issued by party’s spokesman, Kola Ologbondiyan, yesterday, read: “Following this revelation by no other person than the NSA, the PDP reiterates its earlier position that President Buhari should waste no further time in relinquishing his position as President since it is now obvious that he has become overwhelmed by official duties.
“The PDP holds that security is the most important element of governance, followed by the welfare of citizens and since President Buhari has relinquished these statutory responsibilities, he has no other reason to remain in office.
“The party says the NSA’s letter, which is already in the public domain, further exposes the fact that our nation has been on autopilot under President Buhari, whose abdication of serious matters of state is directly responsible for the untold suffering, anguish, pain and escalated insecurity in the country.
“The PDP describes Gen Monguno’s revelation as a national tragedy which showcases the fact that Mr President Buhari has become so irredeemably overwhelmed to the extent that the responsibilities of his office, including presiding over very sensitive security matters, have now been taken over by his Chief of Staff, Mallam Abba Kyari, who functions as a de facto President.
“Nigerians are invited to note the verdict by the NSA, who, in support of the position of the PDP, affirmed that such situation is responsible for the failure of the government to defend Nigerians and find a solution to the worsened insecurity under President Buhari’s watch.
“Our party recalls that even the First Lady, Aisha Buhari, had severally alerted that strange elements had usurped the functions of the president and urged Nigerians to speak out for their country.
“It is now clear that the demand by Nigerians calling on President Buhari to resign was borne out of patriotism and love for our country.” 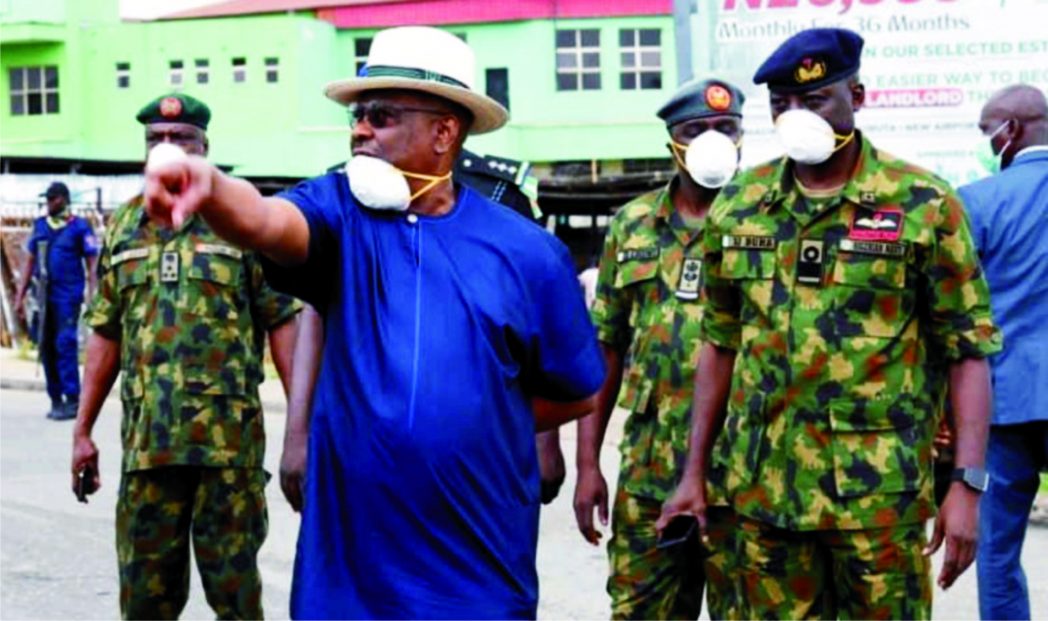 The Rivers State Governor, Chief Nyesom Wike has appealed to the people of the state to continue to support the efforts of the state government to check the spread of Coronavirus.
Speaking at the Government House, Port Harcourt, when he received food donations from Dufil Prima Foods Plc, producers of Indomie Noodles, Wike said it was better to be alive, than to die seeking food.
Wike was represented by the Rivers State Commissioner for Special Duties, Hon Bariere Thomas.
He said: “We are aware that the COVID-19 is what we didn’t expect, but as Christians we are prayerful believing that the situation is not going to last forever. So, we are calling on our people to cooperate with the government and remain at home.
“It is better to stay hungry and be alive than to die while eating. We expect our people to cooperate with government even as we remain prayerful.”
Wike said the food donations will get to the less privileged.
“We want to assure you that the materials will be distributed to the needy. We also want to say that your company and other non-governmental organizations are equally expected to join hands with the government ensure that the hard time they face is handled.
“Let me on behalf of the governor of Rivers State and the good people of the state thank the Dufil Prima Food Plc for responding timely to the situation we have at hand”, he stated.
The governor said that he understands the hardship the people pass through, but pointed out that the sacrifice is necessary to defeat Coronavirus.
He said: “We are all aware of the order of government for our people to stay at home. The government is not equally unaware of the hard time we are facing as a result of this order, that is one of the reasons why we are most grateful for your company for considering this donation.”
The Head of Administration of Dufil Prima Foods Plc , Mr Chinedum Wali said that the food donation is aimed at assisting the less privileged as they sit-at-home.
He said: “We are all aware about the Coronavirus that is spreading across the country and the world. On behalf of the management, we have brought a token to assist and support the less privileged.
“With the situation and the lock down, we brought this to assist the needy. We have one thousand cartons of noodles and five hundred cartons of pastas.”
Meanwhile, The Rivers State Governor, Chief Nyesom Wike, yesterday, extended the curfew imposed on some parts of Port Harcourt City and Obio/Akpor local government areas of the state capital, warning that failure by residents of affected areas would be met with severe consequences.
Wike spoke yesterday, while monitoring the level of compliance of the curfew imposed by the state government on some densely populated areas, particularly, Obiri-Ikwerre Junction (Ozuoba, Rumualogu) to Choba and from Education Bus Stop to Agip Junction.
The curfew was aimed at ensuring that residents of the areas observe the sit-at-home directive to check the spread of Coronavirus in the state.
Wike imposed curfew on Obiri-Ikwerre Junction (Ozuoba, Rumualogu) to Choba and from Education Bus Stop to Agip Junction after residents of the area failed to comply with government directive closing markets across the state as part of measures to obey the social distancing rules.
Accompanied by Security Service Commanders, Wike started the monitoring exercise at Education Bus Stop up to Agip Junction.
The governor made his observations to the service commanders and operational service operatives on ground before proceeding to Obiri-Ikwerre Junction (Ozuoba, Rumualogu) to Choba where he made further observations on making the curfew effective to check the spread of Coronavirus.
It would be recalled that, yesterday, the Rivers State Government, had clarified that the curfew imposed at Education Bus Stop to Agip Junction, Ikwerre Road and Obiri Ikwerre Junction to Ozuoba, Rumualogu and Choba was for 24 hours with effect from March 31, 2020 till further notice.
During his state-wide broadcast, last Monday, Wike stated that the Rivers State Government would continue to take necessary measures to check the spread of Coronavirus.
He said: “Let me reiterate that this government will continue to do what is right no matter who is involved. As you are all aware, no conventional war has grounded global life and economy like Coronavirus has done.
“Everybody is affected. Therefore, all hands must be on deck to defeat Coronavirus. I want to sincerely express my heartfelt gratitude to our health professionals on the frontline of this fight. Let me also thank all the security agencies, individuals and organisations who are collaborating with us to make Rivers State safe.
“I am confident that with our collective resolve our dear state will contain the spread of this virus”.
Also speaking, the state Commissioner for Information and Communications, Pastor Paulinus Nsirim, clarified that the 24-hour curfew was meant to reinforce government’s desire to contain the spread of the virus in the state.
A statement by the commissioner, yesterday, said the measure was an improvement from the dusk-to-dawn curfew earlier announced by the governor.
He explained that it was in its quest to further prevent infection of the Coronavirus in the state, that the Rivers State Government imposed 24-hour curfew in identified key areas of the state with high human traffic.
The statement reads in part: “This is to inform members of the public that the curfew imposed at Education Bus Stop to Agip Junction, Ikwerre Road and Obiri Ikwerre Junction to Ozuoba, Rumualogu and Choba is for 24 hours with effect from today, March 31, 2020 till further notice.
“It has also come to the notice of the state government that some banks are closing down in the state. The curfew is targeted at only some parts of the state. Therefore, banks have no excuse to shut down their operations.
“Any bank that is found to be closed will find it very difficult to reopen for business in the state”, the government warned.

COVID-19: NCDC Set To Increase Test Capacity To 1,500 Daily …As Confirmed Cases Of Coronavirus In Nigeria Rise To 139 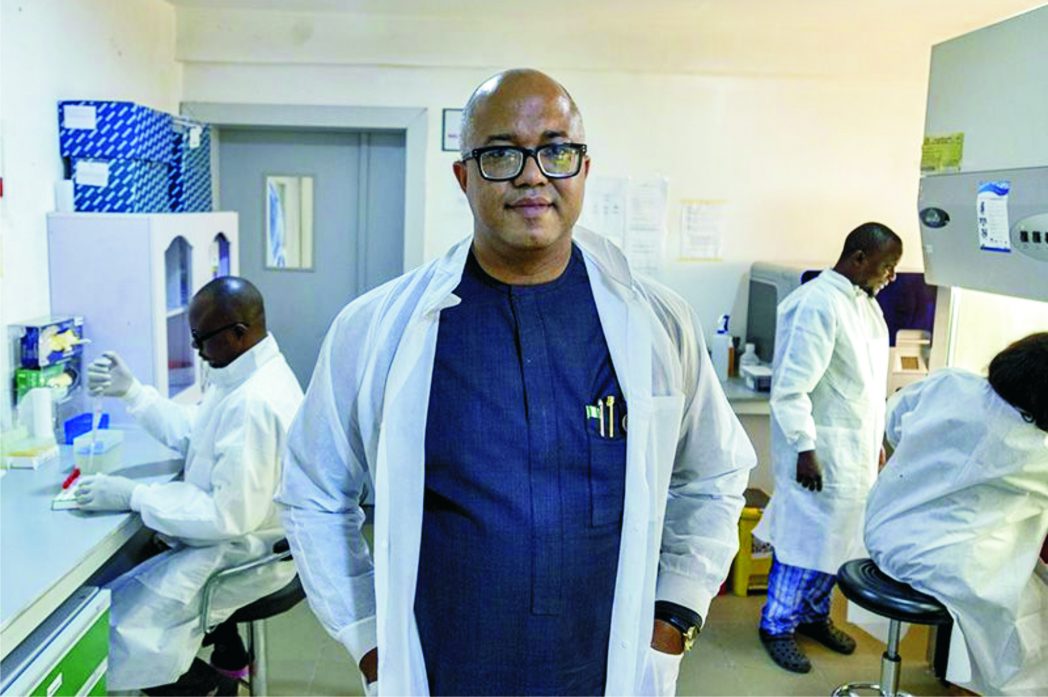 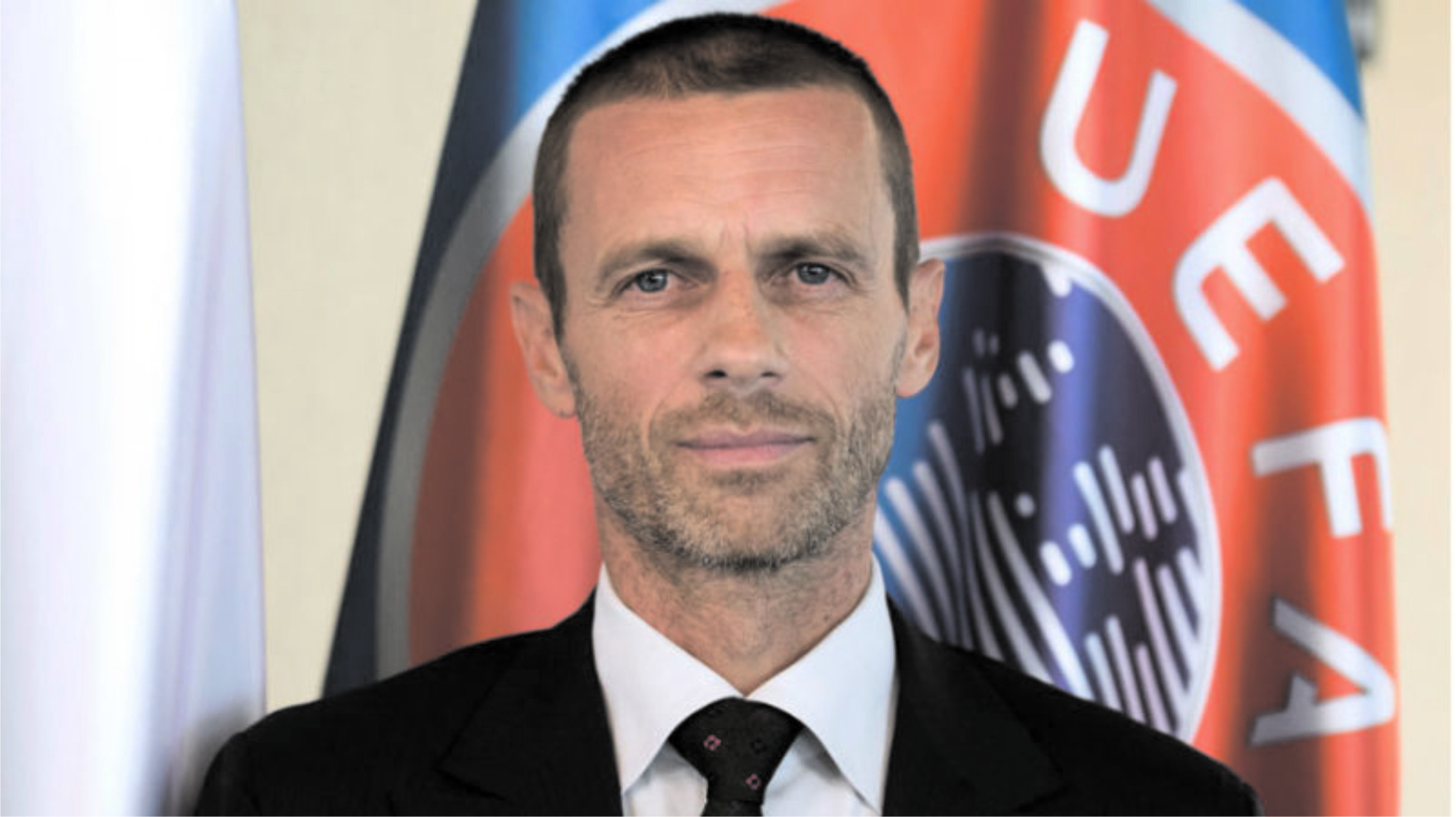 UEFA President Aleksander Ceferin has said that the current football season could be lost if it cannot be restarted by the end of June.
Most leagues in Europe are suspended because of the coronavirus pandemic, with this summer’s Euro 2020 tournament postponed for another year.
Ceferin says seasons could be finished behind closed doors.
“If we don’t succeed in restarting, the season will probably be lost,” the Slovenian said.
He told Tidesports source, “There is a plan A, B and C.
“The three options are to start again in mid-May, in June or at the end of June.
“There is also the possibility of starting again at the beginning of the next [season], starting the following one later. We will see the best solution for leagues and clubs.”
As it stands there are nine games to be completed by the majority of Premier League clubs, and up to 12 in the Football League.
All football in England is suspended until at least 30 April.
Ceferin says that playing remaining games behind closed doors would have to be an option across Europe.
“It’s hard for me to imagine all the matches behind closed doors, but we still don’t know whether we’ll resume, with or without spectators,” he said.
“If there was no alternative, it would be better to finish the championships.”