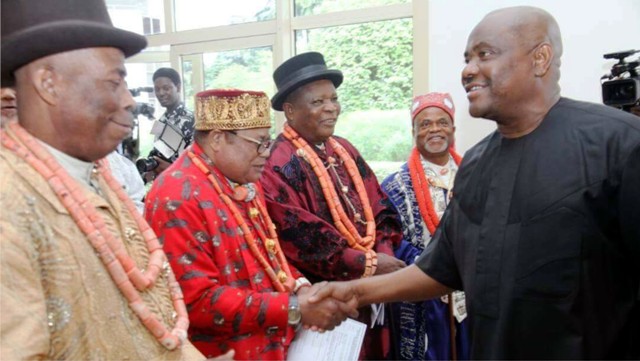 The Eze Oha Evo Kingdom, King Leslie N Eke  has said that the  conditions  laid down by Governor Nyesom Wike for any Local Council Chairman seeking second term position of office was ideal, adding that it will keep the chairmen on their toes.
Eze Eke stated this in a chat with journalists at the weekend in his palace at Woji in Obio/Akpor Local Government.
Recall that the state Governor, Chief Nyesom Wike, had said that the only condition for a Council Chairman to secure a second term in office was total acceptance of the people and high performance.
The Nyerisi Eli Woji, said the governor’s position was necessary to ensure enthronement of credible leadership and to avoid becoming a chairman only on the basis of political party membership.
The Eze Evo III of Evo Kingdom, pointed out that exotic office likes that of the council Chairman should be on total acceptance by the people and not on any other ground.
The Eze Gbakagbaka, said if such conditions as spelt out by the Governor, were if strictly followed, governance in the Local Government would receive a boost.
According to him, it would also ensure a smooth electoral process that would produce seasoned leaders who will serve and meet the demand of the people.
“ If the conditions laid down for the second term election of the council chairmen are strictly followed, it would not only produce good leaders at the grassroot, but those capable of meeting the need and aspirations of the people”, he said.
Another advantage of the Governor Wike’s views he noted, was the eradication of mediocrity in local governance as the people would be forced to only vote for the best among the candidates.