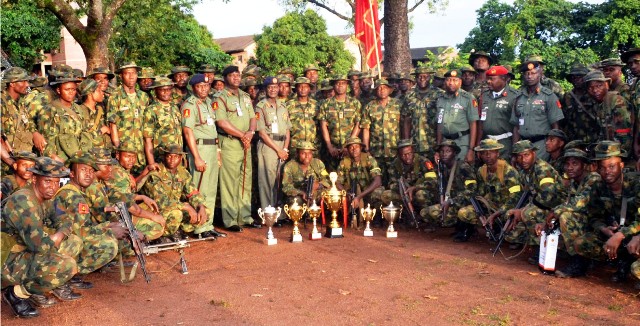 13 Brigade, Nigerian Army, Calabar, has emerged second in the army officers’ combat proficiency competition which ended recently at the 82 Division of Nigerian Army, Enugu.
Chief of Army Staff, Tukur Brutai,  disclosed this while delivering a speech at the West African Social Activities (WASA) ceremony which held in Calabar.
Brutai charged officers and personnel  of the Nigerian army to be combat ready at all times by deploying the  tactics learned during the counter terrorist/counter insurgency training exercise  organised by military high command where they were equipped with skills on how to put  terrorists/insurgents at bay when need be.
Brutai, who was being represented at the ceremony by Commander 13 Brigade Nigerian Army, Brig. Gen. Oluyemi Thomas Olatoye, said,”The training activities were conducted based on 13 Brigade trainers circle as well as 82 division trainers circle and the Nigerian army trainers circle and doctrine focus event  of 2019 leading to  13 Brigade emerging second in the competition”.
The army boss enumerated achievement of the brigade in the last six months to include conducting welfare activities for the troops, changing.  roofing sheets of 18 blocks including corporal below quarters and sinking of 36 new suck-away in below quarters.
“We raised perimeter fence of the Akim Barracks, 4 damaged submergible pumping machines were also replaced”. The Brigade commander maintained.
Other projects executed at the command to motivate the troops include, establishment of a water point with 6 dispensing taps, with two other points with 3 taps each.
Olatoye maintained that 13 command under his watch has successfully reactivated waterboard reticulation within Akim Akim Barracks as well as equipped the 13 Brigade figment centre.
In a bid to strengthen civil military/civil relations, “We also conducted 3 medical outreach in Ekpri Ikang in Bakassi, Okpoma in Yala, Danare in Boki and Afi community of Ikom LGAs during exercise Crocodile Smile 4.
“Some other activities conducted by 13 Brigade in the year 2019 include construction of 13 Brigade dragon which you see down there spiting fire’ He said, (pointing his fingers at a carved dragon monument).
“One of our major feats is the provision of conducive socioeconomic environment as well as conducive for the 2019 elections, he said.
The army boss maintained that the headquarters of 13 Brigade will in line with the vision of the army chief of Staff Lt Gen. Tukur Brutai’s wish to have a professionally responsible army in the discharge of their duties.
Olatoye, who gave a brief synopsis of WASA stated that West African Social Activities popularly called WASA was an annual event in the Nigerian Army  first celebrated in January 1946 after the Second World War by the British Colonial Officials.