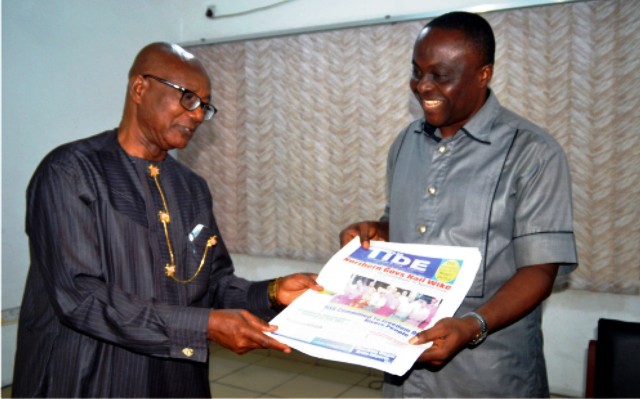 The National President of the Nigeria Institute of Public Relations (NIPR), Mallam Mukhtar Zubairu Sirajo, has stated that as a country, Nigeria needs relationship mending to put things right for development.
Stating this during a courtesy call on the Rivers State Commissioner for Information and Communications, Pastor Paulinus Nsirim in his office, yesterday, the NIPR boss said this is because, a lot of relationships in the country are cracked, and therefore needs Public Relations (PR) to mend it.
Emphasising the need for all to accept the truth as a means to enhance mending relationships, he noted that PR does not mean telling lies to merely create a feeling of everything being okay, rather it calls for an acceptance of the truth before coming up with solution.
“At the moment, particularly in this country (Nigeria), we need a lot of relationship mending. Our relationships are cracked, there’s no other time that Nigeria is in need of PR than now.
“In PR, we don’t tell ourselves lie. We don’t tell ourselves everything is okay simply because we want to see things being okay. You’ve to acknowledge that a problem exists before how to solve it.
“If we keep on playing the ostrich, we’re not going anywhere. We have to acknowledge that we have a problem. The country we have today is not the one we used to have. The country we used to have was far better than the one we have today.
“We can always retrace our steps, ask ourselves pertinent, even difficult questions, come up with answers as to where we got it wrong, what happened before, and what happened afterwards that makes us see things in different perspectives”, he said.
It’s in this light that the NIPR boss views the appointment of Pastor Paulinus Nsirim as Commissioner for Information and Communications as a clear acknowledgement of the importance of professionalism and excellence in the development of Rivers State, and Nigeria at large.
While congratulating the Commissioner over his appointment, Mallam Siraju stated that the Governor, Chief Nyesom Wike, also deserves accolade for appointing a professional, and in so doing exhibited an acceptance of the importance of giving professionalism it’s place in order to develop the country.
“I want to congratulate the governor for two things: the first is for putting a square peg in a square hole, for recognising excellence; the second, and equally important, is for realising that for us to do things properly in this country, the right things must be done”, he said.
In his speech, the commissioner emphasised on the governor’s commitment to appointing the right people into his cabinet in order to enhance the achievement of the goals of the NEW Rivers Vision.
“His Excellency, Nyesom Wike, the architect of the NEW Rivers Vision, has demonstrated clearly that he wants to place emphasis on professional competence in his choice of those who’re members of his cabinet.
“My appointment stands out as one of those positive statements that he has made very boldly, to say that managing public communication, and government information at this point in history, will require a competent and thorough bred professional”, he said.
He continued that the governor is “a man that understands the dynamics of power, politics, and leadership, and he’s ready prepared to get imputes from professional groups. His primary goal as a governor is to make Rivers State a destination of choice, and he has worked, and still working tirelessly to ensure that that goal is achieved”, he said.
In the NIPR National President’s entourage were the immediate past President of the State Chapter, Samuel Toby Oseloka, and Chief Casca Ogosu, a Fellow of NIPR in Rivers State.
Present at the visit were the Permanent Secretary of the Ministry, Barrister Ibiwari Clapton-Ogolo, and all the directors in the ministry.