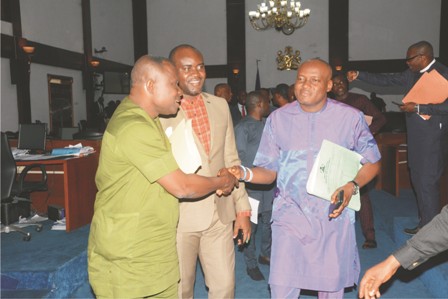 Chairman, Obio/Akpor Local Government Area of Rivers State, Hon. Solomon Eke has said that the administration of Governor Nyesom Wike is God-sent to Rivers people..
Eke stated this during an exclusive interview with The Tide in his office at the council secretariat in Rumuodomaya.
He said prior to Wike’s assumption of office, the State was in turmoil, noting that the courts were closed and people were travelling to neighbouring states to do things like affidavit, marriage registry and all that.
The council boss said, “Illegality was the order of the day. I was a victim of the illegal actions. I was the deputy chairman of this local government from 2007-2014. That is when our tenure was supposed to have expired because it was a two-term position that was given to us by the people of Obio/Akpor.
“Around 2012, Rotimi Amaechi, then Governor of Rivers State used his stooges that were called members of the House of Assembly to remove us from office by suspending us illegally. No petition, no investigation was made, just somebody moving a motion on the floor of the hallowed chamber and we were suspended just like that.
“We were never called that somebody wrote us petition to query or give us fair hearing, there was nothing like that.
“We even found out that even the committee that are supposed to be in charge of public petition and complaints never sat any day over a matter concerning Obio/Akpor Local Government for any reason, but we were suspended. It continued like that every day until 2015, God brought Nyesom Wike”, he said.
He also said as a politician, a keen observer of events and an interested party, he knew everything that happened then, saying “I know the potentials that Rivers State has, and some individuals from outside want to enter into Rivers State to destroy what this State, has possibly siphon her resources.
“But all these things changed when Nyesom Wike came and volunteered himself that he is going to redeem Rivers State and he has really redeemed Rivers State. Rivers State was the pride of the nation right now,” Eke said.