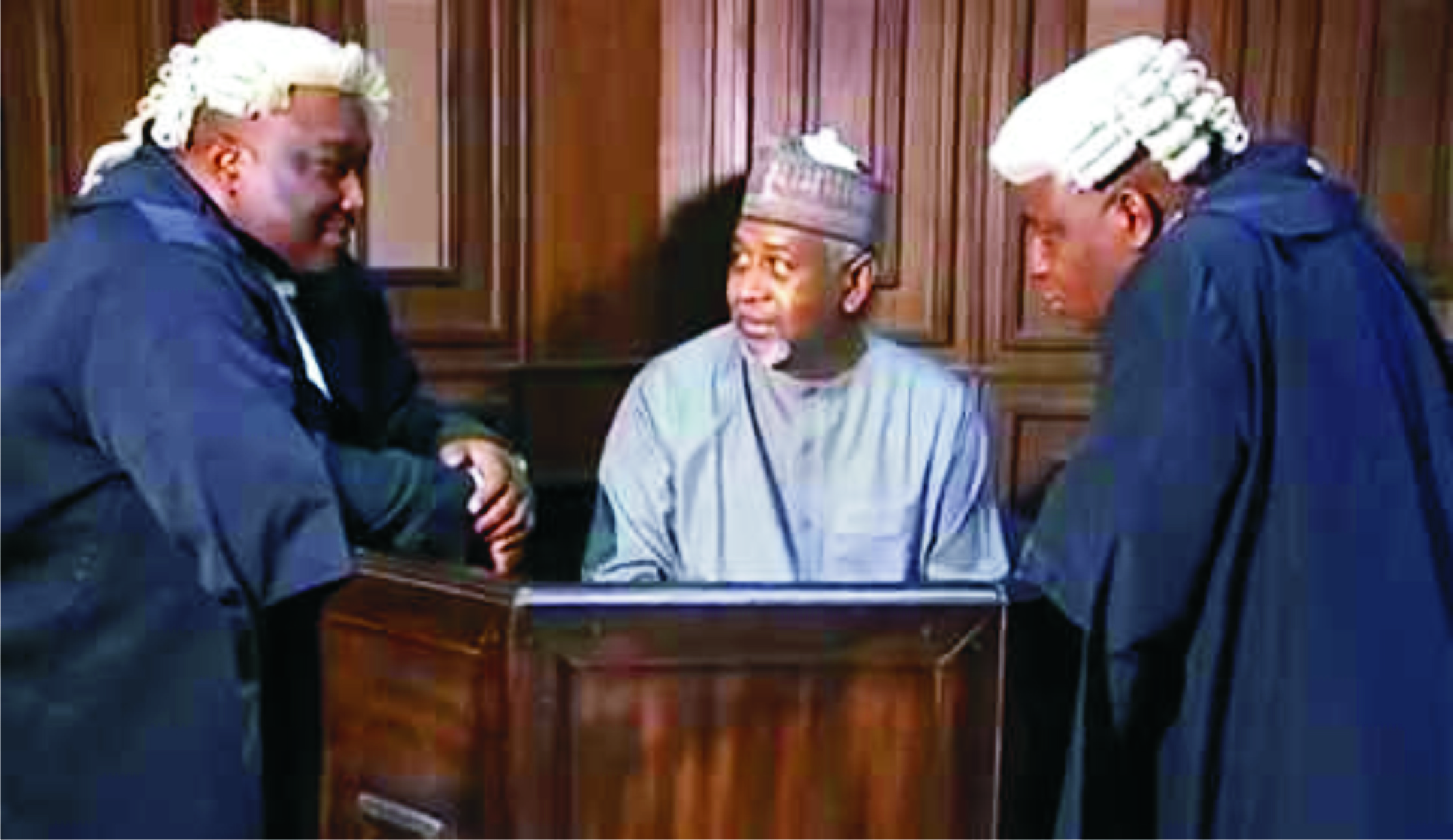 Erstwhile National Security Adviser (NSA), Col. Sambo Dasuki (rtd), yesterday, made his first appearance in court for continuation of his trial, exactly 30 days after he was released from prolonged detention that lasted over four years.
Dasuki, who appeared before the Federal High Court in Abuja said he was ready to defend the seven-count money laundering and illegal possession of firearm charge the Federal Government preferred against him.
Consequently, the ex-NSA, through a lawyer that represented him, Kayode Ariwoola, applied and withdrew two applications he filed while he was still in detention.
Dasuki had in the first application he filed on December 11, 2018, protested the continuation of his trial despite refusal by the Federal Government to obey different court rulings that ordered his release on bail.
In the second application he filed on January 8, 2019, the ex-NSA urged the court to invite some senior lawyers, including the current and two former presidents of the Nigerian Bar Association, to give their legal opinion on the propriety or otherwise of his continued detention without bail.
However, Federal Government, in an unpredicted move on December 24, 2019, ordered his release from custody of the Department of State Service (DSS).
Owing to the development, Dasuki’s lawyer, Ariwoola, yesterday, told the court that the two pending applications were overtaken by events.
He said: “My lord, we have two applications pending before this court. The two applications have been overtaken by the event because our client was released on December 24, 2019.
“In the circumstance, we apply to withdraw the applications”.
The Federal Government’s lawyer, Mr Dipo Okpeseyi (SAN), said he was not opposed to the withdrawal request.
Justice Ahmed Mohammed subsequently struck out the applications, even as he fixed March 11 and 12 for the continuation of the trial.
The court had on November 19, 2018, granted Federal Government leave to try Dasuki in absentia after he repeatedly failed to show up for trial.
Trial Justice made the order after Federal Government, in an affidavit, it filed before the court, alleged that the then detained former NSA blatantly declined to further subject himself for trial.
It told the court that the ex-NSA said he would no longer make himself available for any proceeding in respect of the criminal charge against him.
The Federal Government, therefore, applied to be allowed to try the Defendant in absentia, in line with section 352(4) of the Administration of Criminal Justice Act, 2015.
While granting the request, the trial Judge noted that Dasuki personally wrote a letter to the court on November 12, 2018, and adduced reasons why he would no longer appear for his trial.
“It is very clear that the Defendant is not willing to be attending to court for his trial. I hereby invoke Section 352(4) of the Administration of Criminal Justice Act, 2015, to continue this trial in the absence of the Defendant”, the judge held.
Meanwhile, over a year after the order was made, no substantial progress was made in the case.
The Federal Government had in the charge before the court, alleged that Dasuki was on July 17, 2015, at his house situated at No. 13, John Khadiya Street, Asokoro, Abuja, found to be in possession of various range of firearms without requisite license, an offence punishable under section 27 (1)(a) of the Firearms Act Cap F28 LFN 2004.

US Bans Visas Issuance To Foreigners For Birth Purposes