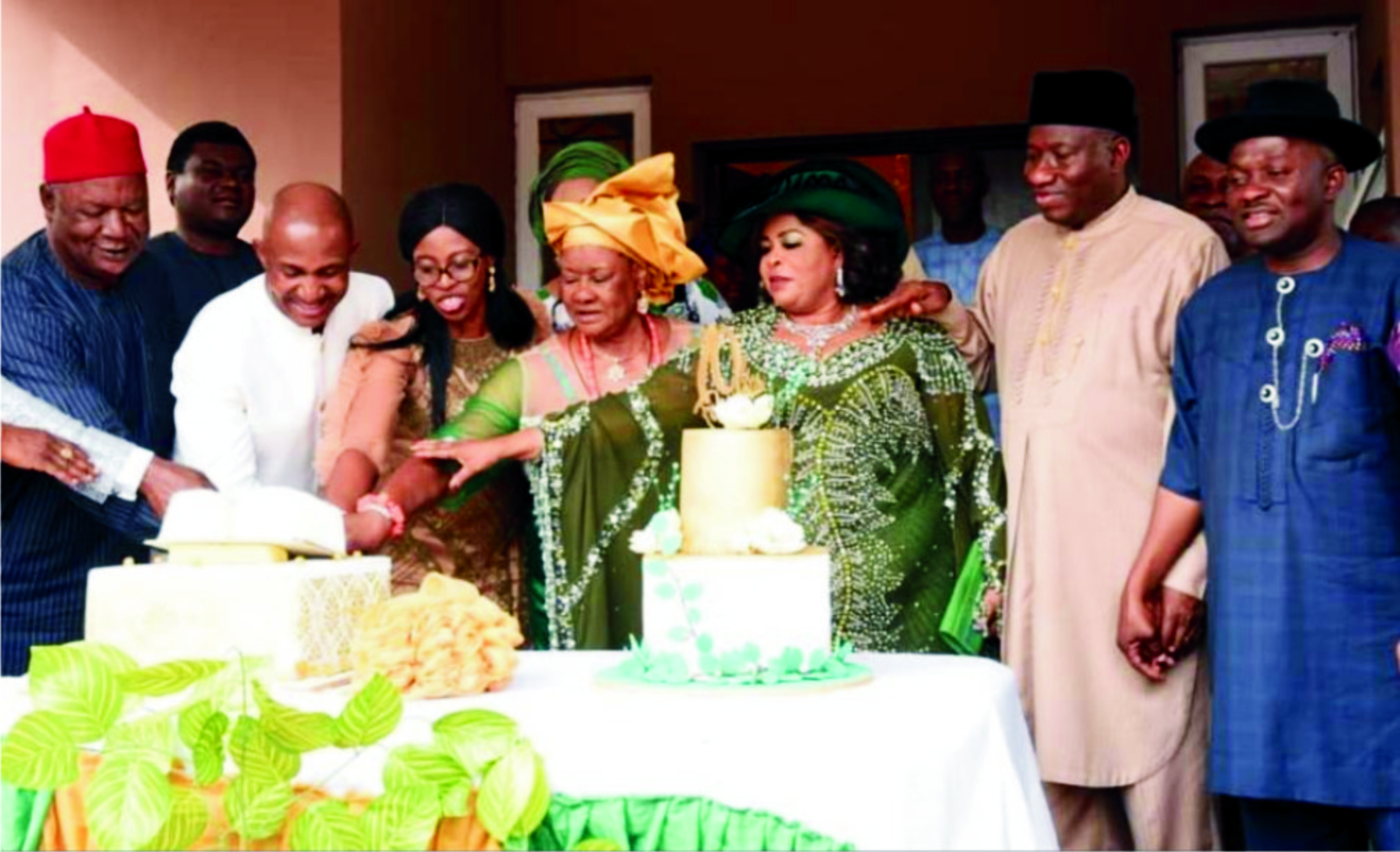 The former President, Dr Goodluck Jonathan and Rivers State Governor, Chief Nyesom Wike, yesterday, urged citizens to keep praying for the country despite the challenges of the present time.
Both leaders, who spoke at St Mary’s Catholic Church, Umuopara, Nguru in the Aboh Mbaise Local Government Area of Imo State, during a service marking the 50th birthday anniversary of a former Chairman of Nigeria Pilgrims Commission, Dr John Kennedy Opara, urged the citizens to keep praying for Nigeria.
Jonathan specifically described the celebrant as his friend, who believes in the indivisibility of the country.
The former president said that Opara had devoted his life working for the advancement of Nigeria.
Former President Goodluck Jonathan, his wife, Dame Patience Jonathan and Rivers State Governor, Chief Nyesom Wike had joined other prominent Nigerians to celebrate Dr John Kennedy Opara as he celebrated his 50th Birthday.
The former executive secretary of Nigeria Christian Pilgrims Commission and his wife also dedicated their twins as part of the celebration.
The 50th Birthday/Child Dedication of the former Executive Secretary, National Christian Pilgrims Commission, Dr. John Kennedy Opara, took place at St Mary’s Catholic Parish, Umuopara Obetiti Nguru, Aboh Mbaise LGA Imo State, yesterday.
Speaking further, Jonathan said that John Kennedy Opara was an asset to the country, adding that the former Nigeria Christian Pilgrims Commission executive secretary was a dependable ally, with immense capacity for public relations.
He said that Opara has cultivated friendship across all the strata of the society to the extent that even those who hate him are not his enemies.
Jonathan said that John Kennedy Opara played a key role in the formal establishment of the Nigeria Christian Pilgrims Commission, explaining that it was on the premise that he nominated Opara to Yar’Adua for appointment as executive secretary.
Also speaking, the Rivers State Governor, Chief Nyesom Wike described the celebrant as a man of character.
Represented by his Chief of Staff, Engr Chukwuemeka Woke, Wike said: “John Kennedy Opara is a dependable person and a man of character. During the last elections, so many people deserted the state due to Federal Might, but John Kennedy Opara stood by us.
“At our very darkest moments, he was there. He is a man you can call a friend. That is why the Rivers State governor is represented here. He is very loyal, sociable and all a man of character.”
Also, the Anglican Primate of Nigeria, Bishop Nicolas Okoh, said that the clergy had a duty of praying for the country.
In a remark, former Executive Secretary of Nigeria Christian Pilgrims Commission, Dr John Kennedy Opara thanked God for his blessing and protection, saying that his friendship with Wike will continue to blossom, noting that the governor is a great man.
The Birthday/Child Dedication attracted prominent Nigerians from all walks of life.

Wike Orders All Markets Closed From, ’Morrow …Confirms Index Case …Directs Civil Servants From GL 1 To 10 To Stay At Home 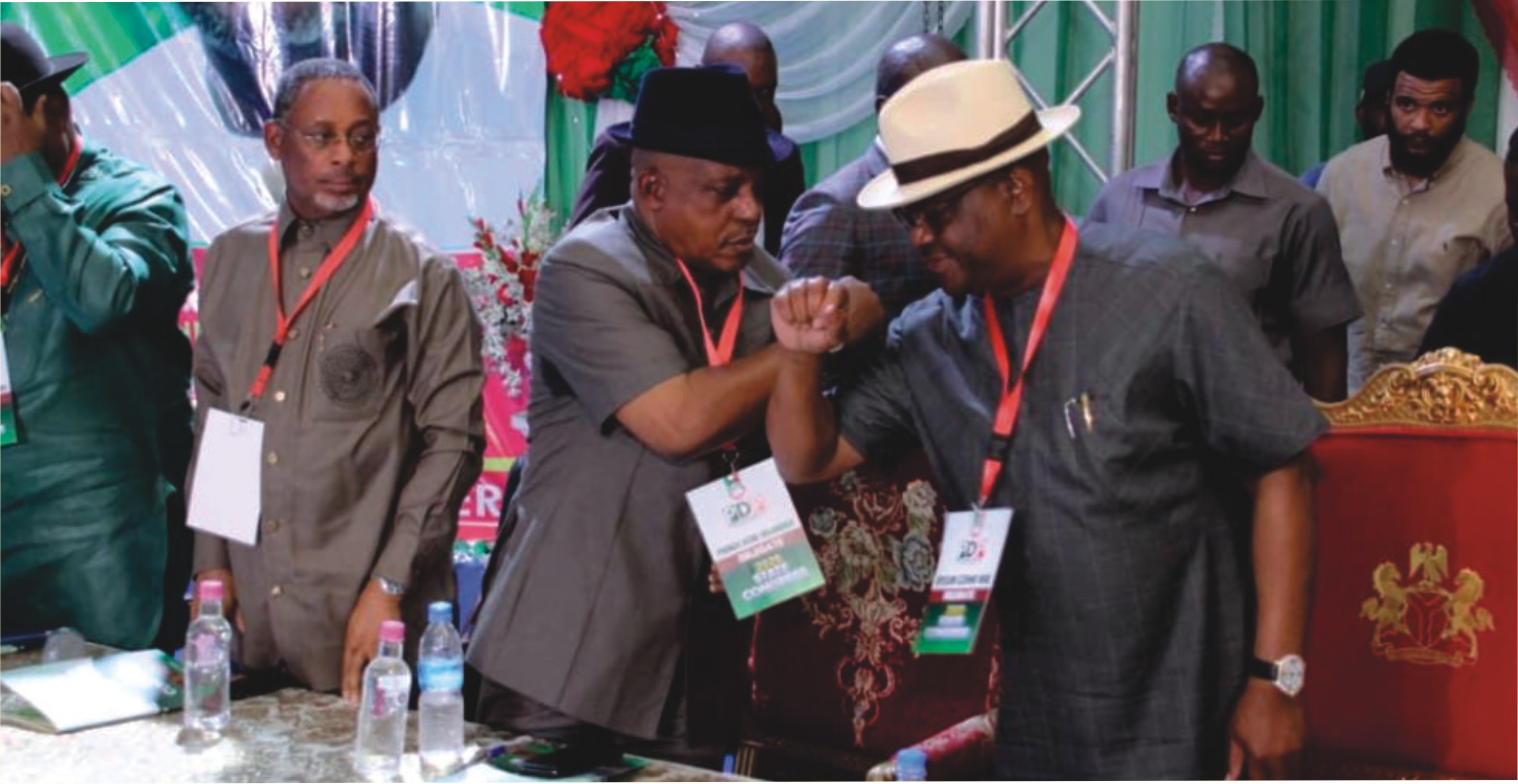 The Rivers State Governor, Chief Nyesom Wike, has confirmed the index positive case of Coronavirus in the state, declaring that the state government has commenced contact tracing of all those she had contact with.
Wike also announced that all markets in the state are to remain closed from Saturday, March28, 2020.
The governor also directed that all civil servants from Grade Level 1 – 10 are to remain at home from today until further notice.
In a broadcast, yesterday, Wike said: “It is, however, unfortunate that despite all the preventive measures we put in place, our state has recorded a positive case as confirmed by the National Centre for Disease Control (NCDC).
“The positive case is a 19-year-old female model from Edo State who resides in Port Harcourt. Her travel history reveals that she travelled to France, Italy and Greece before returning to Port Harcourt on March16, 2020. ”On arrival to Port Harcourt, she was asymptomatic and commenced self-isolation in her family house before her samples were collected and sent to the Reference Laboratory, Irruan in Edo State.”
The governor added: “The patient is presently being managed at the State Treatment Centre and she is doing excellently well.
“As it is in normal established practice, intensive line listing and contact tracing of all those she came in contact with has commenced in full force.
“In addition, samples have been collected from high risk contacts for further evaluations while decontamination process has also commenced.
“As the State Chief Executive, I want to sincerely thank this young lady for her patriotic spirit which aided health officials to get relevant information in this direction.
‘May I, therefore, urge you all to remain calm because there is no cause for alarm. The state government is fully prepared to ensure that the incident is contained to avoid further spread.”
Wike outlined additional measures to check the spread of Coronavirus in the state.
He said: “All civil servants from Grade Levels 1 – 10 are to remain at home from Friday, March 27 until further notice.
“All markets in the state, no matter how small, are to remain closed with effect from Saturday, March 28, 2020.
“All local government chairmen are to head task forces in their various local government areas that will ensure that markets remain closed. Council chairmen are empowered to confiscate the goods of defaulters.
“All commissioners and special advisers are to monitor the compliance of the above directives in their various local government areas.
“Security agencies have also been directed to enforce all the decisions taken by the security council.”
Wike said that the state government cannot relax the measures as requested by some organisations.
He said: “After our announcement about border closure, we have received requests from the following companies, Nigeria LNG Limited, Total E&P Nigeria Limited, International Breweries PLC, Oilserve Limited and Nigerian Gas Company to the effect that government should relax the measures because of their activities.
“Government cannot grant their requests now because the protection of human life is more important than any other thing, and we shall do everything necessary to fulfill our obligation in this direction.
“However, we shall review our restrictions concerning their activities when we are fully convinced that it will be reasonable to do so. Let me reiterate that we have taken these painful decisions because we cannot afford to lose any life in this state.
“It is very important at this stage that all citizens continue to practice hand hygiene, respiratory etiquette and social distancing to keep our dear state safe.”
Wike pleaded with Rivers people to continue to cooperate with the state government for the containment of Coronavirus. 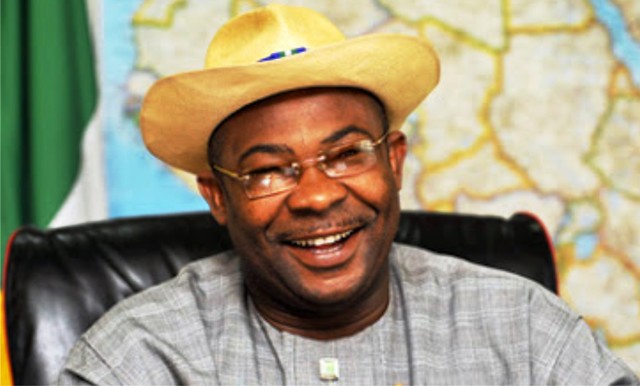 We Should Join Hands To Prevent COVID-19 Outbreak In Rivers, NMA Appeals 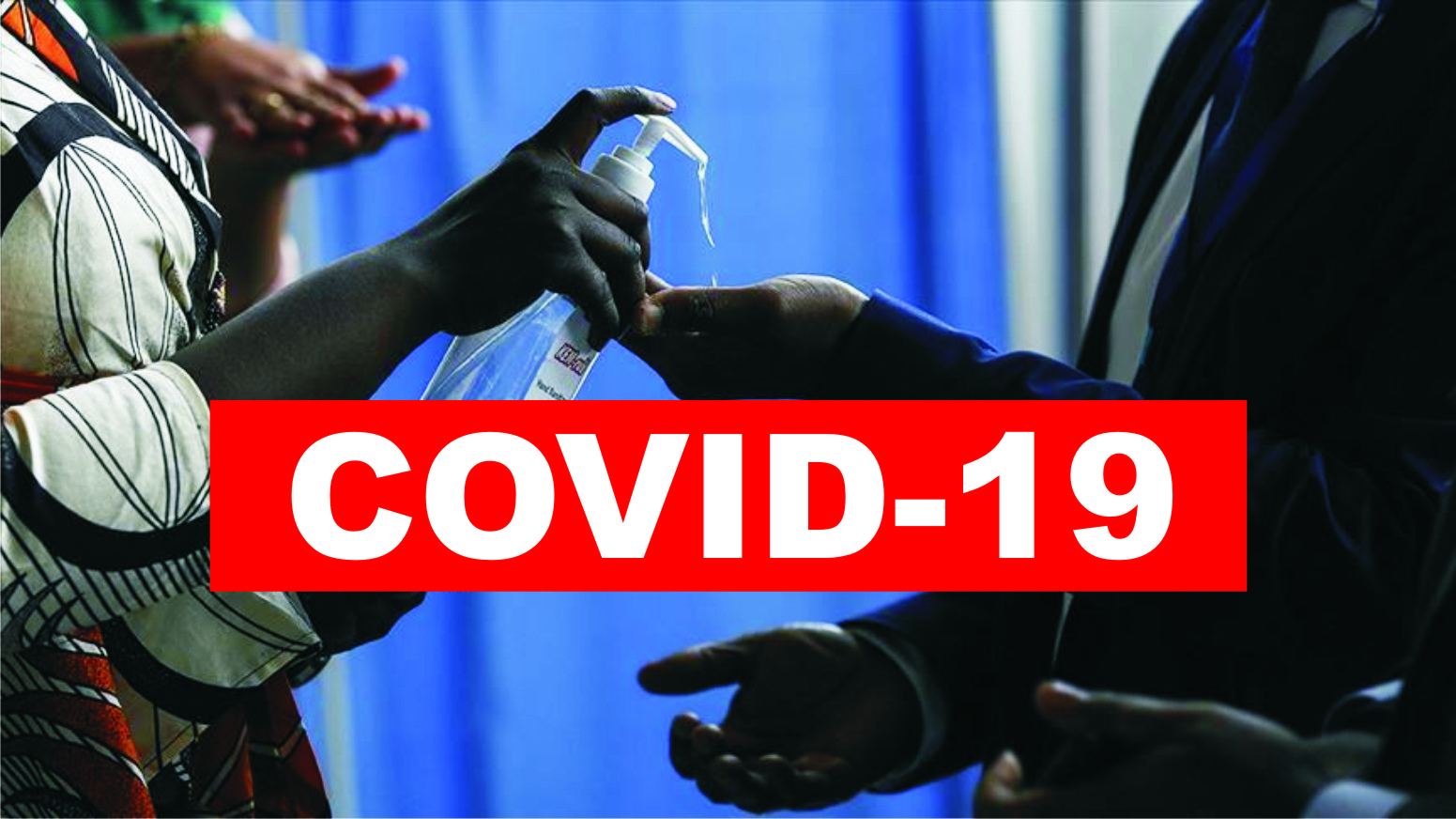 The Nigerian Medical Association, Rivers State branch, has appealed to all citizens of the state and stakeholders to work together and prevent any outbreak of the Coronavirus infection ravaging other parts of the world.
The NMA Chairperson in the state, Dr Obelebra Adebiyi, who made the appeal at a press conference in Port-Harcourt, to address the issue of Coronavirus, said that it was important for everyone to be involved in preventing outbreak of the disease in the state.
Adebiyi said: “All hands must be on deck to prevent an outbreak in the state and maintain high level of surveillance”.
She urged people of the state to take seriously guidelines provided by the Federal Ministry of Health through Nigeria Centre for Disease Control against the disease.
She said: “Specifically, the Federal Government through the Federal Ministry of Health has issued protocols and guidelines for travel and gatherings during the outbreak. These guidelines are to help break transmission and ensure health and safety and are to be taken very seriously”.
Quoting Federal Ministry of Health, she said that people organizing events should use the events to reinforce the message on hand and respiratory hygiene and stay safe against the infection.
The NMA chairperson advised citizens of the state not to panic but implement steps being announced by the state Ministry of Health and the Nigeria Centre for Disease Control.
She advised against misinformation and causing panic about the Coronavirus, saying that the bid to prevent an outbreak of the disease in the state should be seen as a collective responsibility.
Adebiyi commended the state Ministry of Health for steps already being taken to prevent an outbreak of the disease in Rivers State.
She said: “Rivers State Ministry of Health has also embarked on sensitization and education of different groups in our society. The NMA Rivers State is advising all citizens not to panic but adhere to all protocols laid out by the Nigeria Centre for Disease Control and the Rivers State Ministry of Health, especially as it concerns hand hygiene, cough etiquette and social distancing.
“We urge the general public to maintain social distancing and avoid crowded places as this will help to break transmission. The state Ministry of Health has placed appropriate measures at the entry points into the state aimed at detecting and curbing any spread of COVID-19 virus in the state”.
She said that people with symptoms such as fever, cough, catarrh, chest pain and difficulty in breathing should report to health facilities to be tested stressing that those who recently travelled to countries with high prevalence of the disease should also self-isolate for at least 14 days.
The chairperson of the NMA also commended the Governor of Rivers State, Chief Nyesom Wike, for appointing NMA members into his cabinet, saying that they will be “super performers” in the administration.
Adebiyi said: “His Excellency has once again shown by this appointment that doctors in the state are capable of effectively contributing to the NEW Rivers Project”, saying that the group assures its members will be “super performers in their ministries and departments”.