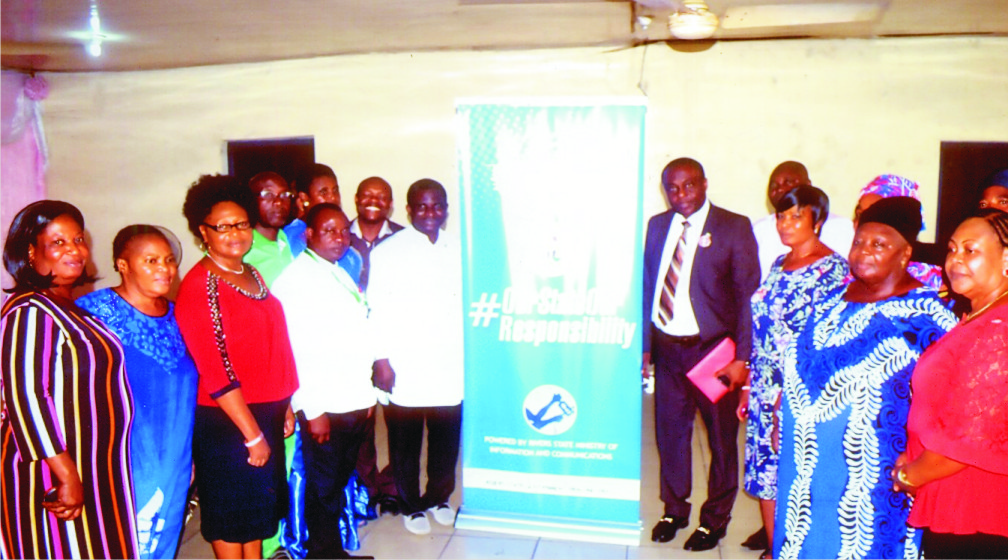 The Rivers State Commissioner for Information and Communications, Pastor Paulinus Nsirim, has called on the management and staff of Rivers State Broadcasting Corporation (Radio Rivers) and Garden City Radio, Port Harcourt, to do everything possible to up their game in order to perform creditably towards achieving the NEW Development Vision of the state Governor, Chief Nyesom Wike.
Nsirim, who stated this during his media tour of the two media organizations, last Friday, stressed that his appointment was a collective promotion for the entire journalists in the state, particularly those working in the government-owned media.
The commissioner stated that he shared in the pain of the state media houses as there were challenges facing government-owned media houses, but added as an optimist, he believed that “if we work together to support His Excellency, the Governor of Rivers State, Chief Nyesom Wike, things will change for good in government-owned media houses”.
He emphasized that in every challenge, he sees opportunities for greater efficiency and productivity, adding that it was the reason why he has challenged both management and staff of the organizations on the need to be creative and innovative.
“We need to have a re-orientation and begin to utilise what we have to make a mark. And the charge I have given to these organisations, as a commissioner, I will be demanding productivity, efficiency and improvement in editorial content, programming, better administration, and of course, profitability. These things are achievable, if we all galvanise our potentials. As staff of these media houses, if we galvanise our potentials, we can rewrite the story that I am seeing today”, Nsirim added.
He challenged those in the government-owned media in the state to change their attitudes to work, adding that it would no longer be business as usual.
“The time we are now demands enough innovation and creativity”, he said, adding that “everyone must join forces to make a difference in my administration”.
He further urged staff to put in their best in their responsibilities, noting that “If you don’t put in your best, divinity will not smile at you, because hard work pays. Only hard-working staff will be my friends.
“We want to know the input every staff is making towards greater achievement. Programming, content, and revenue generation must improve. We are a family, and I’m expecting greater productivity in content and programmes,” the commissioner said.
Nsirim also said that the state Governor, Chief Nyesom Wike, has come to reshape the destiny of the state for the better, adding that it was for this reason that the governor has turned the state into a huge construction site.
He explained that it was also for the same reason that some detractors of the governor seek to de-market the state with a view to scaring away investors, in order to have perceived good reason for doing what they are doing.
“If in the present harsh climate that we find ourselves, the governor will start to build three flyover projects at the cost of N21billion, and they are being constructed simultaneously, and he has released 70 per cent of that amount to Julius Berger, I don’t know what other proof people want. Where has any governor tried it in this country?
The commissioner, whose visit to the station was part of the state government-owned media tour, stated that the vision of the governor was to make the state a destination of choice, towards which the state-owned media need to up their game.
“He (Wike) is a man, who has come to reshape our destiny, make Rivers State a destination of choice. So, we must collectively use our various media organs to support the ‘NEW Rivers Vision’ of His Excellency.
“What I have come to do is to get us to have a change of mind-set, re-orientation to tell ourselves that in the present circumstance, we can still make ourselves relevant”, he said.
He continued that, “The ultimate goal is for us to reposition Rivers State Broadcasting Corporation, in the face of challenges of equipment and transmitter.
“My charge to all the state media houses is that within the limit of what we have, we need to demonstrate to the people of Rivers State that we have the potential to deliver.

FG’s Disregard For Federal Character, Cause Of Divisiveness -HURIWA