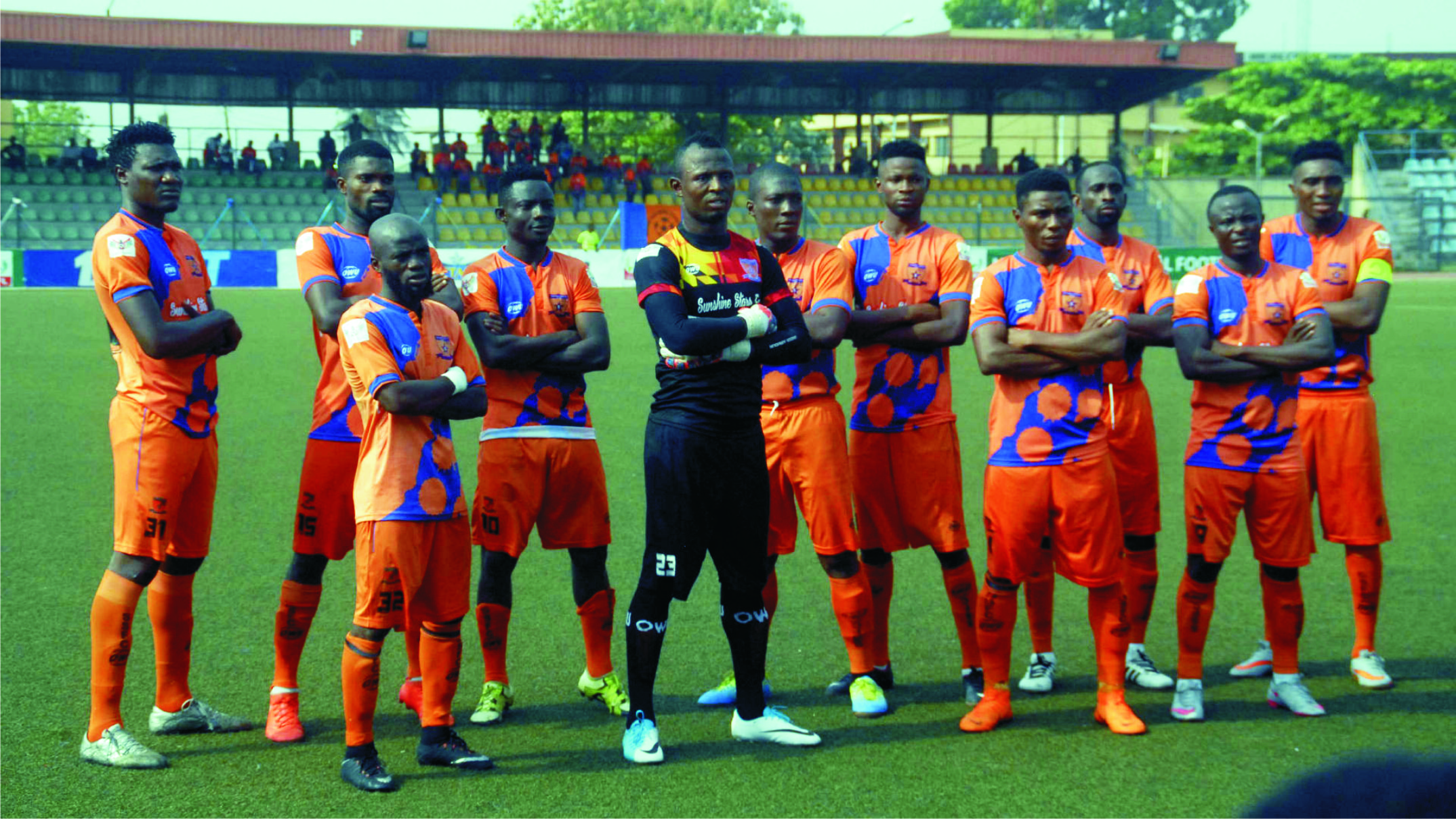 A more determined and coordinated Sunshine Stars of Akure, Wednesday made things happen late in each half to see off a wasteful Jigawa Golden Stars with a 2-0 victory.
The hosts began their dominance of the match from the blast of the whistle and were almost rewarded as early as the third minute when Timileyin Ogunniyi’s free-kick forced Kenneth Christopher to a great save.
The home fans were left in anguish one minute later when they expected the centre referee to allow Mohammed Suleiman to play on as an advantage but the referee sounded his whistle before the striker scored a goal, which was later ruled out.
In the 15th minute, Seun Olulayo won a free kick for Sunshine in a dangerous position, Jigawa Stars defended brilliantly with a defender heading out the resultant free-kick from his goal line.
The Akure fans were on their feet again in the 25th minute when Fuad Ekelojuoti from the left-hand side of the field found an unmarked Jide Fatokun whose shot narrowly went off target but received an applause from the crowd. On the half-hour mark, Jigawa Stars would have been ahead when a split pass dividing the Sunshine Stars’ defence with only Ojo Olorunleke to beat in the process but they wasted the opportunity with a poor finish in front of goal.
Two minutes later, Sunshine Stars forward Mohammed Suleiman benefited from a poor Jigawa Stars clearance inside their goal area and responded with a fantastic bicycle kick but Kenneth Christopher made what would contend for a save of the season to deny the hosts. With one minute left before the break, Suleiman broke the deadlock following a loose ball from Ekelojuoti, helping the winger (Ekelojuoti) to register an assist in the game.
Sunshine Stars’ players showed that they responded well to the half time team talk when Fatokun laid the ball before Hillary Ikenna who dragged the chance in front of the Jigawa Stars box three minutes into the restart. In the 51st minute, Sunshine Stars head coach, Kabiru Dogo, introduced Sadeeq Yusuf for wasteful Uche Ihuarulam, his introduction added bite to the hosts’ front line and helped peg the Jigawa defenders to their half.
The hearts of Sunshine Stars’ fans were in their mouths in the 58th minute when Jigawa broke from a poor orchestrated corner kick leaving Olorunleke to come off his line in the process but Samuel Agba slipped with only a tap in required to ensure the ball landed in the net. Jigawa were presented with occasional opportunities to level the scores but their poor showing in front of goal won’t let them score.
Former Nigeria U-20 International, Wasiu Jimoh, who replaced Ekelojuoti in the 74th minute, put the icing on the cake for Sunshine in the 82nd minute when Ogunniyi’s brilliant pass found the winger on the left-hand side of the field and beat the offside trap to tip the ball over onrushing Kenneth Christopher for the second goal.
Speaking after the match, Kayode Julius, Sunshine Stars Chief Coach, said the new target for everyone in the team was to win more matches since their game against Lobi Stars in Makurdi irrespective of where they are playing.
“There is improvement in the team now and we are scoring goals, I hope we can keep this up” Julius said. The Sunshine Stars chief coach allayed fear that the team won’t score goals with continuous absence of in-form striker, Israel Abia. “We have many experienced players in our striking position, we have one of the best teams this season and in every positions, we have two or three players.