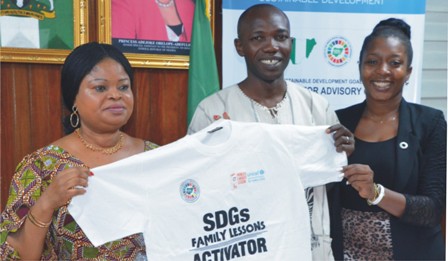 The Eze Mbo K’ Egi of Egi Kingdom in Ogba/Egbema/Ndoni Local Government Area of Rivers State Prince Shedrack Akolokwu has called for effort to remediate the Egi environment.
Akoloku who said at a recent event at Erema Town also said long years of oil production has left indelible footprint on the Egi environment.
He said some of the inprints have been positive, while others have been negative adding that oil companies, specifically Total Elp never planned to bring flood waters from the River Niger to inundate the Kiparian communities in its area of operations.
“This is the paradox of unintended consequences, yet when the great floods come annually, oil fields, oil wells, flow stations, production platforms, well head, waste pits, pipelines, tank farms, various oil and gas bore-holds are covered and the contents are spewed into the Egi environment, including surface waters and underground aquifers.
“Particularly soluble toxic chemicals, non-biodegradable substances ruin the environment.”
Akolatwu who is a former Senior Special Adviser to Governor Wike, said time has come for everyone to work collectively to restock the Egi environment.
“This is the era of the United Nations Sustainable Development Goals (SDGs) whose focus is on Economy, Environment, Sustainability, “we believe you can individually or collectively act deliberately to regrow and regenerate the Egi environment, especially to replenish its diminished hitherto ruin diversity.
“You can organically support the planting of more trees, the creation of green verges, the demarcation of forest reserves, the reintroduction of lost-flora and fauna in order to not only increase the oxygen supply in our threatened ecosystem, but also to deliberately create environmental sustainability.
“I urge you all to support the restocking of our wild grooves, rivers courses, lakes, swamps, water channels, rivulets and deliberate ecosystem” he said.
According to Akalokwu, with collective effort, the people of Egi can rejuvenate their environment through the green environment scheme.
“We can turn public schools, command centres, intra and inter community roads into viable, attractive biodiversity centres.
“If Pakistan can successfully tackle aridity from the far desert with the planting of six billion trees, Egi kingdom can be turned Rwanda.
“Honours from such efforts by all of us shall be everlasting and you would have left more plant footprints on our land and clime” he said.

Don, Others Decry Resurgence Of Soot In Rivers