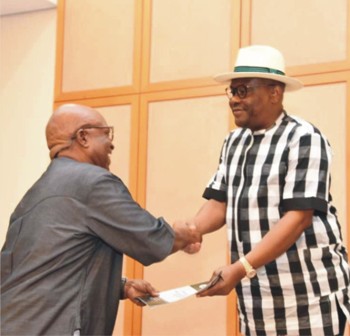 The Rivers State House of Assembly has screened the 13 persons nominated by the State Governor, Chief Nyesom Wike as members of the state executive council.
Those screened and confirmed as Commissioners-designate include Paulinus Nsirim, Soni Ejekwu, Austin Ben-Chioma, Sylvanus Nwankwo, Osima Ginah, Inime Chineweno Aguma and Ifeoma Nwankpa. Others are Dr. Peter Medee, Bariere Thomas, Dr. Fred Kpakol, , Tasie Chinedu, Rodaford Long-John and Professor Kaniye Ebeku.
The screening was sequel to a letter from Chief Nyesom Wike requesting for their screening and confirmation.
During the exercise, the lawmaker representing Khana Constituency 2, Hon.Prince Ngbor Piccolo noted that the tax clearance certificate submitted by one of the nominees, Silvanus Nwankwo was not up to date.
On his part, the nominee Silvanus Nwankwo defended that the taxes were deducted from source.
However, Speaker of the House,Rt. Hon. Ikuinyi-Owaji Ibani ruled that the House will only confirm the nominee if he presents an up to date tax clearance to the House.
Leader of the House, Hon. Martin Amaewhule moved the motion for deferment of debate to tomorrow to enable those whose particulars were not complete to be submitted.
Meanwhile, the State Government yesterday announced the postponement of the swearing-in of the 15 newly appointed Special Advisers whose swearing – in was earlier billed for today.
A statement from the office of the Special Assistant to the Governor on Electronic Media, Simeon Nwakaudu, said a new date for the swearing-in ceremony will be communicated to the public.
Those appointed as Special Advisers are Sunny Wokekoro, Alabo George Kerley, Okiri Aribitonye and Erastus Awortu. Others are Sylvester Mgbor, Victor D. Ekaro, Innocent Paddy Wali, George Ariolu, Deima Iyalla, Emma I. Utchay, and Nkem Nwaribe. Also appointed are Harvey Azuka Ideozu, Andy Nwanjoku, Austin Sor and Otonye Briggs.