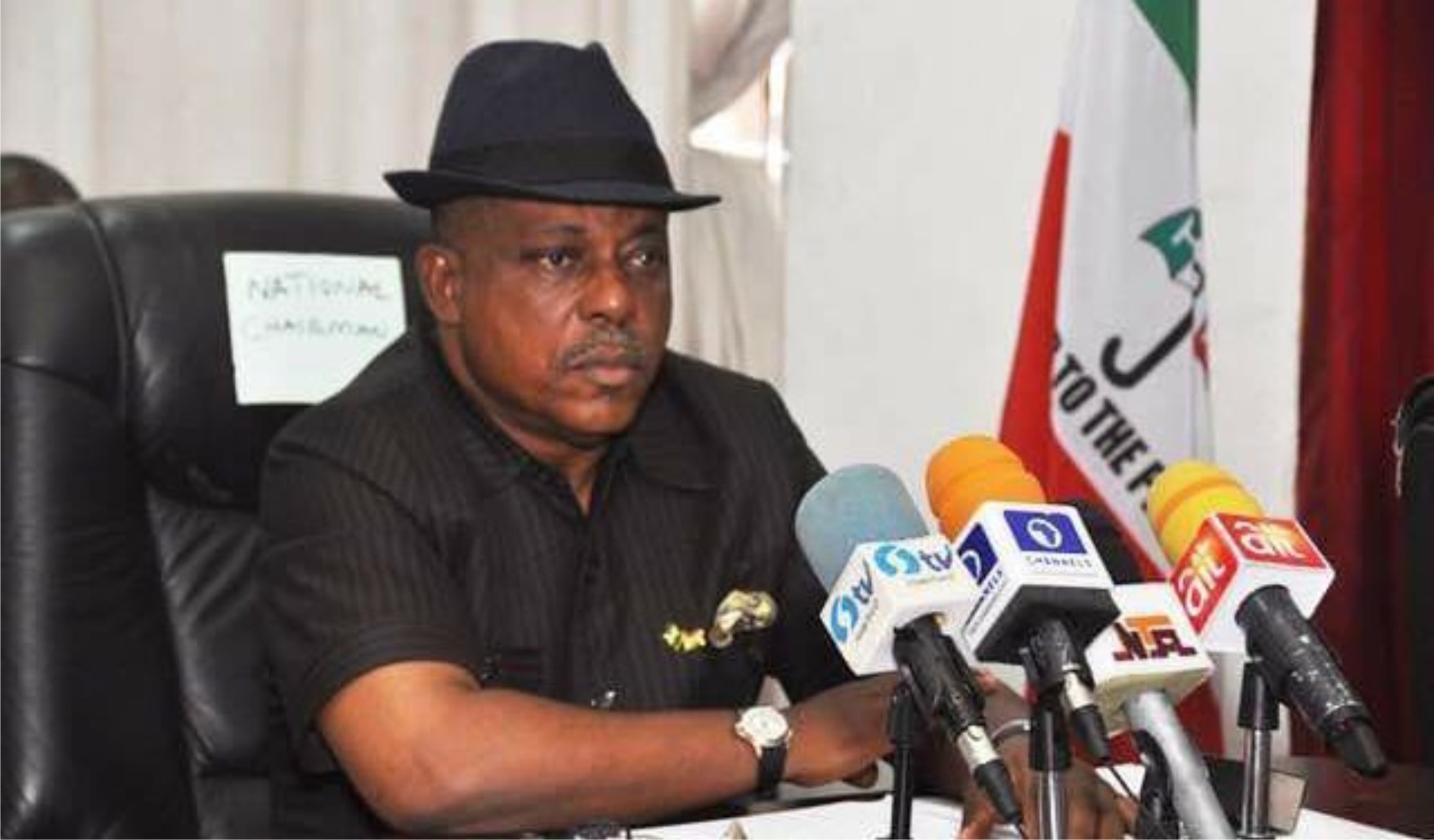 The Peoples Democratic Party, PDP, on Monday expressed fears of participating in the upcoming gubernatorial elections being planned for Edo and Ondo States in 2020.
It also re-echoed its disappointment in the conduct of the just concluded Kogi and Bayelsa governorship elections by the Independent National Electoral Commission, INEC.
PDP, therefore, tasked the Independent National Electoral Commission, INEC, to embark on electoral amendment through the National Assembly to address most of the challenges in conducting elections in the country.
The PDP National Chairman, Prince Uche Secondus said this while addressing INEC delegation who came to carry out a routine verification exercise at the party’s national headquarters in Abuja.
While addressing some of the operatives of the electoral umpire, Secondus alleged that the INEC integrity was at stake given the trajectory of elections it has conducted so far in the country.
He pointed out that some of the INEC staff had compromised their offices.
In his words: “INEC as presently constituted has integrity questions. Some of the staff have compromised their offices.
“We advise that INEC should go back to the drawing board and consider the past elections it has conducted.
“Even INEC needs a reform. We can’t continue this way. Is either we practise the American model or adopt the Egyptian model where soldiers shall be part and parcel of the election process.
The PDP National Chairman affirmed it was time for INEC to submit the necessary amendments to the National Assembly so that an improved legal framework can be put in place for a free and fair election to be achieved.
He, however, added that the conduct of the 2019 general elections set Nigeria backwards.
Some of the bitter lessons, according to Secondus, are: thuggery, killing, militarisation of voting scenes and disruptions of voting process.
Others are the alleged INEC involvement in operating the APC agenda, brigandage, intimidation, coercion and manipulation of results, hijacking of election materials and deployment of military helicopters among others.

Chairman of the Peoples Democratic Party, PDP, in Rivers State, Ambassador Desmond Akawor, has described Governor Nyesom Ezenwo Wike as the Joshua of our time who, against all odds, stood up to liberate the people of the state from the forces of darkness and oppression.
Ambassador Akawor stated this on Monday when he received the leadership of Grassroots Development Initiative, GDI, who paid him a solidarity visit at the PDP Secretariat, Port Harcourt.
Ambassador Akawor emphasised that the governor has exhibited enough sagacity  and courage by  bringing  the state out of the pit which his predecessor plunged it, stressing that GDI should be grateful that the governor they worked so hard to install was performing wonderfully well to the admiration of all in the state.
“Most of you who are leaders of GDI joined him when nobody gave him the chance that he was going to succeed”, Akawor said, noting that the party was happy with any GDI member who occupied any position in the administration because he worked hard for it. Ambassador Akawor, who disclosed that local government election would take place next year, said the party would campaign during the election as if it is a national election.
He also warned members of GDI not to associate with any member of the party found to be nursing gubernatorial ambition, saying that at the right time, the party would decide on the direction to go.
“very soon the game will start, various candidates will come up, my appeal to you is that do not get yourself distracted, Rivers state is a peculiar family” he noted, and urged the group to continue to pray for the Governor to actualise his laudable plans for the state.
The state PDP Chairman also told the GDI members not to allow moles infiltrate their fold and cause division among them, urging them to remain vigilant, united and focused.
Ambassador Akawor, who disclosed that all the actions of the Governor were geared towards protecting the interest of the people of the state irrespective of party affiliation, recalled how he  (Governor Wike) saved Barr Joy Nunieh, who is not a member of the PDP from being kidnapped by security forces.

A peace ambassador and leader of Amnesty Phase II in Delta State, Mr Kingsley Muturuhas described Governor Godwin Obaseki‘s victory as the final blow to godfatherism in Nigerian Politics.
He, however, called on the governor to carry everyone along and ensure that his administration ran a purposeful and people-oriented government.
Muturu said this in a congratulatory message to Gov. Obaseki following his victory at the just concluded Edo governorship election.
He noted that Obaseki‘s victory in the election was an indication that no godfather could succeed whenever the people were determined to take their fate in their hands.
According to him, the era of godfatherism in politics was finally coming to an end as people can effectively protect their votes in spite of all odds.
“I congratulate the governor of Edo who is now the governor-elect on his hard fought and well deserved victory.
“The people of Edo have spoken with one voice and that should be respected.

Group Knocks Obasanjo Over Comments On State Of Nigeria

A group of elders in the country, The Patriotic Elders Council, PEC, has faulted ex-President Olusegun Obasanjo over his recent statement that Nigeria has failed and is badly divided.
PEC said Obasanjo should bury his head in shame because he laid the foundation of the problems currently facing the country and therefore, has no moral right to make such comments.
Obasanjo had during a recent consultative dialogue attended by various socio-cultural groups including Afenifere, Middle Belt Forum, Northern Elders Forum, Ohanaeze Ndi Igbo and Pan Niger Delta Forum, said something must be done to avert the looming disaster.
He said, “I do appreciate that you all feel sad and embarrassed as most of us feel at Nigerians with the situation we find ourselves in. Today, Nigeria is fast drifting to a failed and badly divided state; economically our country is becoming a basket case and the poverty capital of the world, and socially, we are firming up as an unwholesome and insecure country.”
Reacting, however, to Obasanjo’s assertion, the Patriotic Elders Council (PEC) said his comment was least expected of a two-time leader and an elder statesman.
The group in a statement signed by Alhaji Muhammadu Ari Gwaska, its Chairman and Chief Simon Shango, Secretary, said Obasanjo was wrong in his statement.
Part of the statement reads: “Though, sometimes Obasanjo’s utterances are right; but unfortunately, most times, he is condescendingly wrong. His latest public statement at the consultative dialogue is a perfect example of the many instances he is wrong and sounds unconvincing even to himself.
“Ex-President Obasanjo, more than any other Nigerian leader, knows the institutionalized, intricate and complex problems of Nigeria, as the country’s democratic leader from 1999-2007. And he midwived all the two successive administrations which came after him.