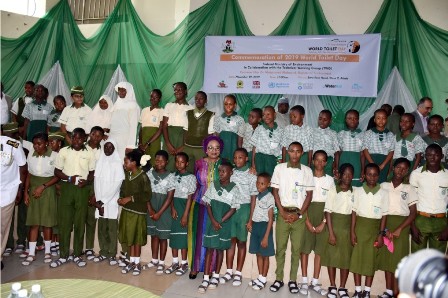 As Rivers State and Nigeria joined the rest of the world to mark the World Toilet Day, some stakeholders in Rivers State are blaming the high rate of open defecation on the lack of toilet facilities in strategic locations across the state.
A cross section of stakeholders, who spoke to, The Tide correspondents on the issue said “most public and private places have no toilet facilities, stressing that the situation makes some people to defecate in the open.
They stressed the need for the government and private sectors to provide toilet facilities in places such as markets, parks, schools, stadia, among others.
They also called for sensitization on the negative effects of open defecation.
On his part, Mr. Innocent Ezekiel, a food vendor at Mile I flyover said “people at the park need to be enlightened on why they should not defecate openly, adding that inspite of the fact that there was a toilet facility, people at the Park go about defecating openly.
According to him, it is very disheartening to see people around the park go about defecating openly when they know very well that there is a public toilet around the Park.
Also speaking, another trader Mr Ifeanyi Ugwu, said: “open defecation brings discomfort, stressing that there is a need for people to be sensitised to know that indiscriminate disposal of faeces can lead to cholera, diahorea, typhoid and other diseases.
Also speaking, Mr Innocent Okorie, called for a law that will punish defecating in the open. According to him, most health related issues have been linked to open defecation stressing that time has come for the government to go tough on those who defecate openly.
For Michael Prince, he stated thus: The government should provide toilets at every corner. “the reason why people defecate around this area is because the government did not provide any toilet facility.”
On his part, Mr James Friday, called for collaboration between the state government and the various local government councils in the provision of toilet facilities across the state.
Friday also stressed the need for high level sensitization in the riverine local government areas with a view to persuading the people to change their habit of defecating into the river.
Also speaking, Chukwuemeka Iruozo, said the sooner Rivers State key into the clean Nigeria programme, the better will be for the society.
Iruozo also called for stiffer penalties for persons who embark in open defecation.