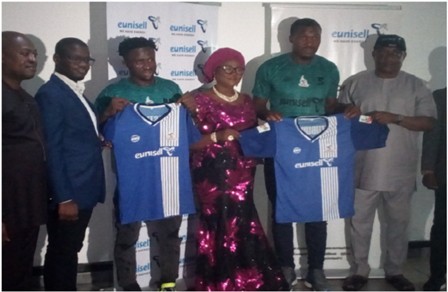 The Permanent Secretary, Rivers State Ministry of Sports, James Enebeli, has commended Eunisell Chemical, Oil and Gas Company for their continuous sponsorship of Rivers United FC.
He assured them that the club will make the company proud this 2019/2020 season by taking one of the Continental tickets and play in the continent.
Enebeli said this on Saturday, in his address at the Eunisell Rivers United Day and official lunch of the club’s kits, at Hotel Presidential.
The Permanent Secretary who was represented by the Director of Sports Development, in the ministry, Prudence I. Harry, said government appreciates the commitment of the company, in terms of sports development.
According to him, it is not easy to consistently sponsor a club that is not winning laurels to commensurate with the money spent.
“It is not easy to invest consistently in a football club since 2015 from Sharks FC, now Rivers United, that has not actually win laurels to commensurate with the money on them, that demonstrates your commitment to promote the club”, Enebeli said.
He used the forum to call on other organizations to emulate Eunisell in terms of sports development.

Earlier the Group Managing Director (GMD) of Eunisell, Chika Ikenga, said the sponsorship of the club will remain unchanged.
He explained that the sponsorship of football club is borne out the passion he has for football, most especially Nigerian football.
Ikenga who was represented by the company’s Finance Manager, Dipo Ogunbiyi, said football in Nigeria provides more than entertainment value for a larger percentage of the population.
According to him, their involvement and support for the round leather game has gone beyond brand awareness for Eunisell, adding that the company has sincere desire to see Nigerian footballers perform better.
“Our involvement and support for football goes beyond brand awareness for Eunisell, it is at a much higher level.
We have a real and sincere desire to see Nigerian football and its players both current and those who will play in years to come, to succeed, and make a decent living by performing better,” he stated.