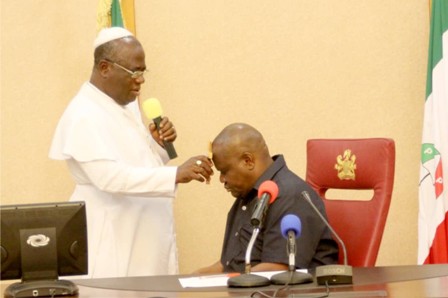 Tribute To The Nigeria Police Band

Former United States Vice-President, Al Gore, once said that people around the world ought to take an urgent action on global warming.
Gore, who is also founder of the Climate Reality Project, believes that climate change is something that is man-made and man can play a significant role to check or eliminate it in the future.
According to scientists, climate change is a change in average weather conditions, or in the time variation of weather around longer-term average conditions.
They agree that to limit the impacts of climate change, people need to reduce greenhouse gas emissions globally.
In addition to this, Minister of Science and Technology, Dr. Ogbonnaya Onu, says there is need for government and stakeholders to tackle climate change by using renewable energy sources.
“I wish to acknowledge that we have been doing some things pertaining greening the environment and stimulating economic growth like introduction and adoption of renewable energy and re-forestation project.
“The objective is to bring to the fore, its relevance, considering the global impact of climate change with its attendant environment degradation.
“The current development in the country is no longer sustainable environmentally like gradual shrinking/drying up of Lake Chad Basin and increase in desert encroachment.
“Others are loss of our ecosystems, reduced agricultural yields and sorts, rising sea levels and floods in southern part of the country, marine erosion and landslides in south-eastern part of the country,’’ he says.
The minister explains further that there ought to be high desire to preserve the environment because urbanisation and industrialisation have come so stay.
Similarly, Mr Bitrus Bako, the permanent secretary, Ministry of Science and Technology, observes that environment should be sustainably managed for present and future generations.
“I am confident that when this transition was fully understood and implemented, it would help to place the nation on proper perspective to mitigate and adapt to the scourge of climate change.
“It will also re-enforce the place of science, technology and innovation as veritable tools for the economic development of the country.
“It is a business of making paradigm shift from resource-based economy to knowledge-based economy, stimulating skills to transit environment to path of greatness and sustainability through Green Growth Technology.
In his view, Prof. Chukwumerije Okereke from University of Reading, UK, explains that the Governing Inclusive Green Growth in Africa (GIGGA) project is focused on Nigeria, Kenya and Ethiopia.
“GIGGA Network is to support interdisciplinary collaboration among UK and international African researchers, as well as non-academic stakeholders to Green Growth in Africa.
“Kenya’s Vision 2030 provides vision and policy framework for sustainable development, Ethiopia’s Climate Resilient Green Economy aims to put the country’s green economy on front runner.
“But Nigeria has no stand-alone green growth plan but incorporates Green Growth in its Economic Recovery and Growth Plan”.
However, the Federal Government says it will reclaim all land lost to gully erosion and assist flood-prone communities in the country, according to Mr AbdulGaniyu Aminu, the Head of Public Relations, Federal Ministry of Science and Technology.
Aminu quoted Onu as saying that the recent inauguration of gully erosion control works at Okwohia, Obowo/Ihitte Uboma Local Government, Imo State would bring relief to the Okwohia community which had for long been devastated by ecological challenges.
“The approval of the project is a clear testimony to the present administration’s resolve to ensure that no part of the country will be allowed to suffer any neglect due to geographical location”, he quoted the minister as saying.
Also, the Permanent Secretary, Ecological Fund Office, Dr Habiba Lawal, said that the project was initiated through a request for an urgent intervention forwarded to the Ecological Fund Office.
She explained that the request was forwarded by Sen. Benjamin Uwajumobi, representing the Imo North District in the Senate.
Lawal said that the inauguration and hand-over of the project to the benefiting community would enable the people to take over and ensure maintenance and sustainability.
Further to government’s intervention such as this, a public health officer in Osun, Mrs Adenike Aluko, stressed the need for more appropriate and effective waste management system to reduce pollution to check climate change.
According to her, relevant stakeholders ought to be proactive towards sustaining system capable to reduce emission from waste generation.
She suggested the use of clean technologies in production system, pointing out that pollution emission worsened the impact of climate change.
She further called on relevant stakeholders to genuinely invest more in development of renewable energy technology to reduce the effect of climate change.
“Using alternative energy, such as wind, solar and geothermal energy was healthier than fossil fuels because of the emission of carbon monoxide to the environment.
“Investing in renewable energy technology would be the right step in achieving Sustainable Development Goals.
“Scientific knowledge allows people to develop new technologies, solve practical problems and make informed decisions,’’ she observed.
Aluko also urged Nigerians to partner with government in ensuring steady funding of research on new measures to mitigate the impact of climate change.
According to her, science and technology sector cannot progress without proper funding and such funding will ultimately come from the society that will reap the benefits.
Agbeja writes for News Agency of Nigeria.

HYPREP And Ogoni Clean-Up: The Glory, The Story

Ogoni, an oil-rich oppressed indigenous ethnic minority in the Niger Delta region of Nigeria, received green-light when in 2006, the Federal Government of Nigeria commissioned the United Nations Environmental Programme (UNEP) to conduct an environmental assessment on the level of environmental degradation and ecological devastation emanating from decades of oil exploration and production in Ogoniland by Shell Petroleum Development Company Nigeria Limited Joint Venture (SPDC JV) since the 1950s till the 1990s. SPDC JV in 2012, later transfered its operatorship to National Petroleum Development Company (NPDC), the production and exploration arm of Nigeria National Petroleum Corporation (NNPC) . In August 2011, report of theassessment popularly known as UNEP Report was submitted to the Federal Government of Nigeria. Wide jubilation and loud cheers greeted the news across Ogoniland when accelerating implementation of the report’s recommendations was identified as one of the cardinal priorities by the PresidentMuhammadu Buhari-led government in 2015.
Buhari made good his promise in August 2016 by inaugurating the Governing Council and Board of Trustees of the Ogoni Trust Fund (OTF) as part of the governance process for UNEP report implementation in Ogoniland.
As an effort to speed implementation of the report, the Ministry of Environment and the Governing Council of Hydrocarbon Pollution Remediation Project (HYPREP) announced the appointment of Dr. Marvin Dekil, an environmental expert of international repute who himself is an Ogoni son, as the Project Coordinator. Since then, hope has been heightened, especially as the report highlights the creation of a One Billion U.S Dollar Ogoni Trust Fund (OTF), convertibly N315.25 billion Naira as at the time of the report, to be co-funded by the Federal Government of Nigeria, the SPDC JV and other operators in the area. Ten Million U.S Dollars (N3.03 billion Naira) and One Hundred and Seventy Million U.S Dollars (N51.52 Billion Naira ) was reportedly contributed by the SPDC JV at various times. All of these put the hope of an average Ogoni man at an impressive height in earnest expectation of what will become of Ogoni in terms of empowerment and development when the fund would be put to use.
At present, some Ogonis who still remember the resonating pitch of One Billion Dollars on campaign podiums are aggrieved that almost half a decade is gone and yet nothing much significant is on the ground. There are speculations that HYPREP is a scam and an agent of another institutionalized genocide against the Ogoni people. Considerably, HYPREP in its thinking may have done so much to the Ogoni people but little since no one can justifiably credit HYPREP with nothing.
The Ogonis had expected to see rural electrification, road construction and other structural projects executed by HYPREP across Ogoni land. Since they have seen little or none, they have resorted to media onslaught on HYPREP, painting it black. Most Ogonis lampoon HYPREP for taking so much delight in an uncivilised habit of self-glorification of its achievements which are only visible on social and electronic media platforms. The news making the rounds has it that development by HYPREP does not conform or align with measures of development of its sister organisations the world over.
Some other Ogonis contend that the multimillion naira wasted for rentage of HYPREP office space in Port Harcourt would have acquired acres of land on Ogoni soil, built magnificent edifice for the office and even provided jobs for Ogoni youth. The rest agree that HYPREP is working, but only fault the process of selecting beneficiaries, thus arguing that it is misdirected.
In all of these, HYPREP has maintained that work is in progress at all the impacted sites. HYPREP, during one of its Tuesday’s Rhythm 93.7 programmes said it had carried out human capital development and entrepreneurship training (home and abroad) of hundreds of Ogoni youths. It has also anchored its position on the fact that cognizance was only taken of the impacted sites during assessment but promise was made to partner with other agencies, governmental and non-governmental, to ensure delivery on other important areas which were not provided for in the report but require attention.
With the position of the report, it becomes an issue of serious concern to note that concentration was, perhaps, only on the 15 sites operated by the SPDC JV without consideration that when oil spills, it permeates the soil to the under-water from where it circulates through the water channels and flows to other areas that were not directly impacted.When clean-up is carried out on the impacted sites, what happens to these areas that were not impacted directly but were affected through the circulation process beneath? Should we call for another UNEP assessment?
HYPREP should not limit public sensitisation of its policies and programmes to a select class as it did in November 2019 when it organised a summit for few stakeholders of Ogoni origin. Responses from these select Ogoni leaders during and after the forum showed that they were not informed of its programmes until after the summit. Surprisingly, it also reflected in the speech of one of the leaders who is a member of HYPREP Governing Board that she was not in the know of its programmes. It is expedient that HYPREP should, as a matter of serious concern, brace up by taking its sensitization to the grassroots groups in Ogoni, including but not limited to the market women, the commercial motorbike operators and churches, as no Ogoni man is a better Ogoni man than any other. HYPREP should gain its glory by painstakingly striking a balance in addressing these compendious issues. This will change the story.