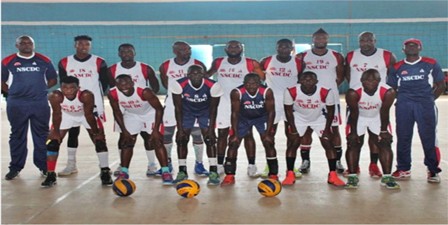 The Nigeria Customs Service (NCS), male team and the Nigeria Security and Civil Defence Corps (NSCDC) female team, have emerged champions of the 2019 National Volleyball Premier League.
They both emerged champions in the male and female categories of the league at the weekend, after 10 days of scintillating performance at the indoor sports hall, package B of the Moshood Abiola National Staduim. Abuja.
Though the Civil Defence (male) narrowly defeated the all conquering Customs in a titanic battle 3-2 (21-25, 25-18, 22-25, 25-22, 15-9) on the last day, it was too little, too late as the well drilled Customs men retained their title, having won all their four previous games.
At the end of the pulsating league, Customs finished with 30 points, followed by NSCDC -24 points, Kano pillars -23 points, police-22 points, Nigeria Immigrations Service (NIS)-19 points and UCEM team- 2 points.
In the female category, NSCDC outclassed the sleek Customs ladies 3-0 (25-19, 25-23, 25-18) to dethrone them as champions.
The NSCDC ladies emerged champions with 32 points, followed by Customs-28 points, Army-20 points, immigration- 10 points, Kada Emeralds- 9 points and Benue Queens- 3 points.
Head Coach of the NCS male team, Eric Kefas, told newsmen after the match that his team worked hard to retain the title.
Kefas assured fans that the team would go back to the drawing board to correct some of the lapses noticed, especially during the last game.
According to him, the team will put up an impressive performance when they play at the continental club championship next year.
“We promised to win the title at the end of the tournament, and we have done that all thanks to the Nigeria Customs service for their support.
“We are now going to shift all our attention to the continental club championship coming up next year and we promise to do the nation proud,’’ the coach said.
Tidesports source reports that the premier league, which kicked off on November 21, ended last Saturday.
The male teams that participated in the league are NCS, NSCDC, The Nigeria Police, Kano Pillars, Plateau Rocks, UCEM and Famous Spiders.